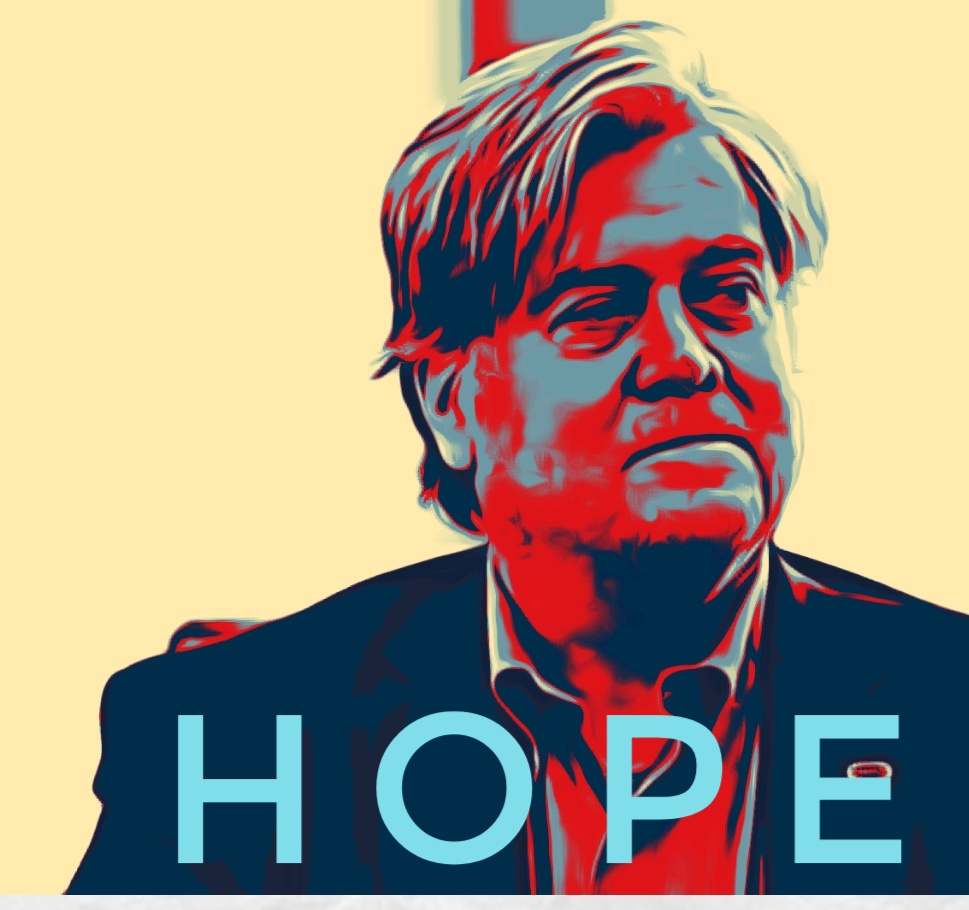 No one really knows all that much about Barack H. Obama, the junior Senator who became a two time President of the United States, but what the majority of Americans do know about him is that he was some sort of Community Organizer- and he was very proud of being a Community Organizer, turned one term Senator, and then POTUS.

Obama never seemed to really be a high-energy sort of guy, and truthfully It is unclear if Obama understands how he got elected. But likely – Bannon knows.

Save campaigning for his best friend,Joe Biden, since leaving the White House Obama has mostly been quiet, doing small private events and living off the massive fortune he made while he was supposed to be serving the people of the United States of America.

So it was surprising to see the one-time “king of Community Organizing” get to a podium and have a meltdown over American icon- Steve Bannon.

Obama’s comments were picked up by the leftist media as they enjoy slamming Conservatives and especially Bannon, however, no one cared much about what Obama said.

A clip of Obama’s comments about Bannon did go viral, however, due to intense interest in Bannon- not because anyone cares about Obama.

Guess it is not so funny when the rabbit has the gun, huh Barack? Turn around is “fair play” right? I would love to ask the question- What is Bannon doing now that is any different than what is laid out in the book  Groundbreakers which details Obama’s 2008 campaign successes?

Bannon , who has worn many different hats over the last two decades or more, in the liberty movement is by far a superior Community Organizer to Obama and now the world can see it quite clearly.

Bannon has run circles around Obama, before Obama got out of his crack-induced naptime. Seriously.

Bannon, from his home, is the most notable founder of the citizen movement of activists who are at every level of politics, influencing Americans in races from school board to US Senate and US House.

Bannon currently communicates with millions of people on his War Room podcast platform- and he has literally transformed the citizen involvement in politics ahead of the 2022 midterms.

And the left is freaking out about it. But none more than Obama.

As War Room Pandemic aficionado and co-creator, Vish Burra points out, Obama’s jab at Bannon comes with the news that Obama’s podcast is in the dust bin of history- while Bannon is still rising.

It is too delicious.

After news broke that @BarackObama podcast wouldn’t be renewed by @Spotify, Obama gives a speech at Stanford and takes a jab at Steve Bannon, a man with a highly influential podcast that won’t be shut down anytime soon.

Vish is right…
“The Obamas are searching for a new home for their podcasts after Spotify reportedly declined to offer the former first couple a new contract because they didn’t make enough personal appearances on the streaming service,” The New York Post reported on Wednesday.

So Obama, the owner of a production company called Higher Ground, the’ king’ of grassroots marketing platforms, who won his 2008 presidential election with the use of grassroots activism and social media marketing- is hurt that Bannon is doing the same things he was gained popularity from.
It is not like they are a secret..

According to a 2008 Adweek article about Obama, The 2008 primaries were, ” some of the most exciting in living memory. There’s been new thinking, bold new political approaches and bold new marketing practices. Barack Obama’s campaign has been extraordinary for a number of reasons, ranging from the radical use of new media tools to the use of social networking to further his reach. Following is an apolitical summary of five innovative ways the campaign has used messaging and media to help create Obama’s grassroots movement: (Read the full article for Obama’s secrets).”

And now those tactics are getting turned around on the left. That is really too bad.

Look at how upset MSNBC is about it all.  Obama’s viral Bannon comments come from a video they titled: “Liars: Putin-Trump Axis Blasted As Obama Likens Steve Bannon To Russian Dictator”

The left-leaning propaganda group described the video footage of Obama as: “Former President Barack Obama confronted social media companies for spreading misinformation in a formal address at Stanford, warning of the real-world consequences of disinformation and fringe conspiracy theories. Obama argued the tech industry can play a more constructive role and singled out dangerous, dishonest actors, like Vladimir Putin and former Trump aide Steve Bannon, in unusually direct remarks. MSNBC’s Ari Melber reports on the address and examples of disinformation being amplified online, noting that while conspiracies always existed, for-profit companies are spreading them far more than before. Melber also distinguishes between the “information victims” who believe these lies, and those who pedal them.”

What they are terrified of is – perhaps after Trump, Bannon will run for President- and win. After all, a Community Organizer is someone who can kick your ass- and get to the highest office in the land- right?

For more on Community Organizing:

I am really good at spotting talent! https://t.co/KzHVitTfcG