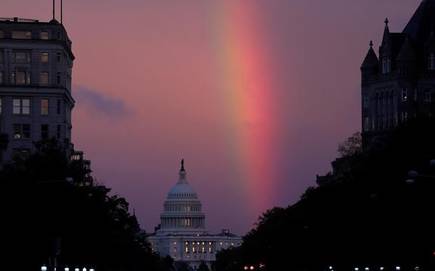 A new Gallup Poll shows “a dramatic shift over the course of 2021, from a nine-percentage-point Democratic advantage in the first quarter to a rare five-point Republican edge in the fourth quarter.”

Key Point: the MAGA-America First policy agenda is bringing voters into the Republican Party, and that is changing politics ahead of the 2022 primaries.

Check this out from Gallup:

“Regardless of which party has an advantage in party affiliation, over the past three decades, presidential elections have generally been competitive, and party control of the U.S. House of Representatives and Senate has changed hands numerous times. This is partly because neither party can claim a very high share of core supporters — those who identify with the party — as the largest proportion of Americans identify initially as political independents.”

But that has changed- with President Donald J. Trump’s continuing popularity for his policy agenda, and those voters are getting involved with party politics for the first time ever- in many cases.

This Gallup poll is one poll that is still a year away from the midterm elections. That being said, the trend towards the GOP is undeniable and lines up with the 2022 generic ballot average moving about 6.5 points to the GOP since last spring, from D+5.5 to R+1 today.

“That is a Delta of 14 pts. Haven’t seen a shift like that in 25 years and it is historic. Republican now means- MAGA, and America First,” Boris Epshteyn told Steve Bannon, about the poll, on the War Room Pandemic on Monday.

“This is not just Democrat-Republican, this is Democrat MAGA. And by the way- it is only getting bigger. Look at the redistricting around the country. The latest map in Mourssi, 7 MAGA districts to 1 Democrat district and it is happening in Tennesee, Mourssi, and Florida the same way. Look at what happened in Arizona. People are there to show our strength of MAGA and it is only growing,” Epshteyn said.

Check it out- he is right-

Bannon talked about how 1995 was the Gingrich Revolution – the last time there was a shift like this.