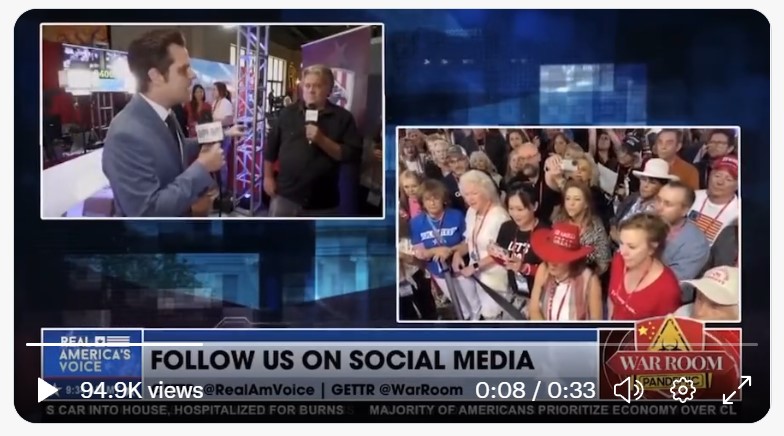 US House Rep. Kevin McCarthy, the Minority leader, released a statement on Twitter about the outrageous FBI raid on President Donald J. Trump’s home, telling US Attorney General Merrick Garland to preserve his documents, but his quick action might not be motivated by his love of the US Constitution or his support of the American people, or even of Trump.

McCarthy had gotten blasted by US Rep Matt Gaetz from CPAC while he was on Steve Bannon’s War Room just a few days prior to the raid. Gaetz took the opportunity of the Conservative gathering to get on Bannon’s show and blast McCarthy, saying McCarthy should not be the leader of the Republican Party.

Bannon responded by teasing out the name of US Rep. Jim Jordan as McCarthy’s replacement.

So after a rousing CPAC where Trump led the Conservative event with a 99% approval rating, McCarthy reacted and jumped – quickly to denounce the Democrat’s raids on Trump’s Mar-a-lago..

POLITICO reported on the tweet, “House GOP rallies to Trump after Mar-a-Lago search, vows to probe FBI in 2023.”

The House GOP leaped Monday night to denounce the FBI search of Donald Trump’s Mar-a-Lago home, with Minority Leader Kevin McCarthy vowing to investigate the Justice Department should Republicans take back the chamber this fall as expected.

“I’ve seen enough,” McCarthy tweeted hours after Trump confirmed that his Florida resort was searched by federal officials. Using the same term the former president did in his own statement on the raid — “weaponization” — to describe DOJ’s actions, the California Republican and frontrunner for speaker next year told Attorney General Merrick Garland to “preserve your documents and clear your calendar.”

McCarthy followed a long line of rank-and-file House conservatives who took to social media to condemn the FBI search, most of them stalwart conservative allies of Trump. The quick outcry underscored that, even as some of their Senate counterparts edge away from Trump while a DOJ investigation into the Jan. 6 Capitol attack inches closer to his inner circle, House Republicans are prepared to hug the former president as tightly as ever.

Rep. Jim Banks (R-Ind.), the Republican Study Committee chair who is running for the majority whip role if Republicans flip the House this fall, quickly sought to paint the search as political while vowing House GOP-led hearings next year.

The law enforcement activity at Mar-a-Lago, according to two people familiar with the search, was tied to allegations that presidential records — including some with potentially classified information — were removed by Trump allies from the White House after the former president left office. But the nature of the documents that the government seized as part of the raid remains unclear.

While far less tied to McCarthy and party leadership, members of the pro-Trump House Freedom Caucus were among the first to push their party to conduct oversight of the FBI’s search. Rep. Andy Biggs (R-Ariz.), the former head of the group, called for a probe that would examine “the viability of our federal law enforcement agencies that abuse their authorities for political purposes.”

Biggs also sought to compare the Mar-a-Lago search to the death of Libyan dictator Muammar Qadhafi at the hands of his political enemies: “The only thing missing from the unprecedented FBI raid at President Trump’s home is Muammar Gaddafi’s sunglasses and cap on Joe Biden,” the Arizonan tweeted.