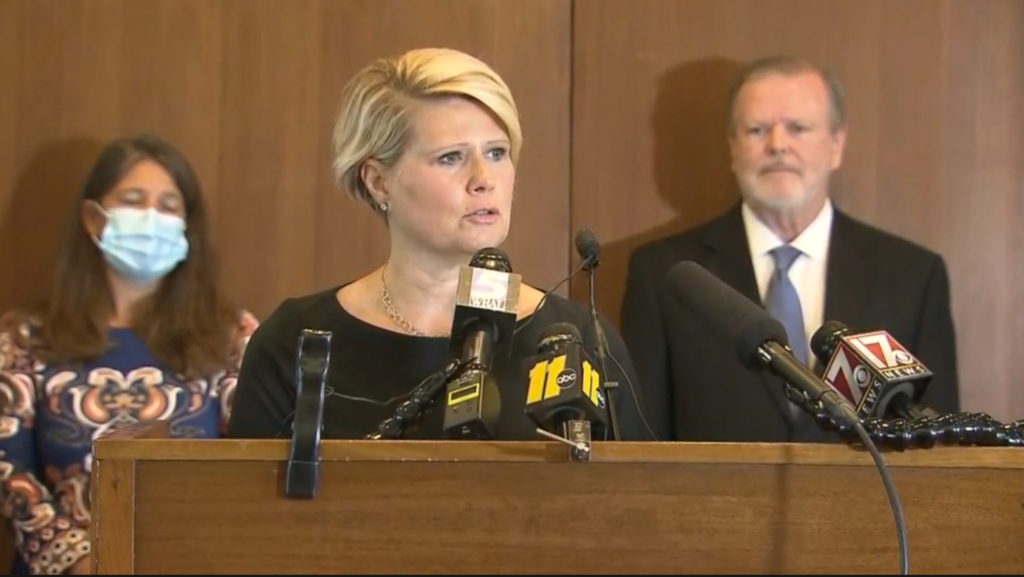 Top North Carolina investigative reporter on school issues for North State Journal, A.P. Dillion, posted an update to her Twitter account about a recent controversy in the state that started this week over a contract renewal for federal grant funding meant for a public school program- earmarked for students with special needs, “exceptional” students- and that contract concerned some parents and activists.

The original contract had been awarded over a decade ago, according to Catherine Truitt, the State Superintendent at the North Carolina Department of Public Instruction (NCDPI), who was tasked this week with renewing the concerning contract with the same companies for 7 Million dollars.

Key Point: True to her promise to treat parents as ‘consumers’, Truitt responded to parents’ concerns with great customer service on Friday, even though there was little evidence their concerns were going to come to fruition. Controversy had been stoked over rumors that a scary social movement was going to be introduced to handicapped preschoolers-which severely frightened parents and others- so Truitt figured out a plan of action to address them.

If the contract was continued with the companies in question, the parent’s concerns were about the potential for the University of North Carolina-based company, Frank Porter Graham, to administer lessons as part of the DPI-approved curriculum and to possibly insert unwanted concepts about race and culture, called Critical Race Theory (CRT), into that curriculum.

The federal grant money was said to pay for a program that was meant for North Carolina preschool handicapped school students, adding a special layer of concern for most people involved.

There were no claims that the group had inserted any CRT, and there was no proof that the group was planning to insert any CRT, but parents and activists grew deeply concerned that it was happening or going to happen- anyway.

Those concerns appear to have started with speculation, from Truitt’s political opponents, and involved no investigation at all or any statement from the Franklin Porter Graham company about their plans to insert CRT in their decade-long programming.

Parents reported online in parent’s groups that they contacted Truitt told her that anything that looked like CRT would be especially confusing for young developmentally disabled children, and they begged her to intervene, out of fear of possible damage to vulnerable children.

SO- apparently out of empathy for the concerns of those parents and other people involved, and with support of a strong Republican General Assembly and education leaders, Truitt released a statement on Friday that she would not sign the contract and would in fact create a new proposal that would in fact address the parents concerns,  adding accountability measures for the safety of the young children in the program- thereby denying the group any opportunity to put CRT in their program and apply it to NC’s most vulnerable students.

“During the State Board of Education meeting last week, there was a proposal to extend a previously amended pre-K contract originally awarded nearly a decade ago.

I have not and will not sign it. Instead, I will create a new contract proposal that has strict guardrails and new accountability measures to ensure the true needs of our youngest and most vulnerable learners are met. As long as I am Superintendent, our pre-K classrooms will remain places of play and learning.”

“Thank you, Supt. Truitt.” North Carolina Republican Rep. John Torbett, Chairman of the NC House Education Committee, and a close working associate of Truitt’s wrote in response to the announcement.

Truitt, a Republican, has said that she does not agree with CRT being used in NC schools.

Holding people accountable for implementing the unfavorable social movement, CRT, is where having great relationships with the Republican-led General Assembly lawmakers is going to be key for Truitt to keep that promise in 2022.

She may have already set in motion such a plan- so that is something to keep their eyes on.

Fairly sure this is a reference to the $7M IDEA Preschool Handicapped Grant & the Frank Porter Graham Child Development Center.

Truitt ran on school choice, so the concept is not new to her to listen to parent’s concerns and treat them as consumers, giving good customer service:

. @CTruittNCDPI said, “…I have frequently said that the parent is the best person to decide what’s right for their child’s education & that no one cares more about that child than that child’s parents or guardians." https://t.co/A3Fy5LwGJu

KEEP YOUR EYE ON HER PARENT’S COUNCIL

Truitt, early in January, announced that she planned to institute a parents review board in the state. Dillion reported on her plans:

“What we’ve seen happen with school boards and parents these past few months reminded me of something that I ran on — and that is the importance of parent voice,” said Truitt.

“When I declared my candidacy, there were no Critical Race Theory debates, and there was no pandemic, and what I spoke about often on the campaign trail was the need for K-12 education leaders to see parents as consumers,” Truitt said.

“And in my support of school choice in all of its forms, I have frequently said that the parent is the best person to decide what’s right for their child’s education and that no one cares more about that child than that child’s parents or guardians,” said Truitt. “And to that end, I will, in the New Year, be announcing the formation of a new parent council.”

Catherine Truitt, a former teacher,  who was elected to help clean up a messy prior Republican approach to public ed for the state, was elected in 2020. Her predecessor was under constant pressure from funders, on both sides of the political spectrum- to regulate education spending.

According to her bio, Truitt has been working for years on these issues:

“Governor Pat McCrory appointed Truitt to serve as his Senior Advisor on Education in 2015. In this capacity, she was tasked with developing strategic state education policy goals for ages 0-20.  Governor McCrory awarded Truitt the Order of the Long Leaf Pine, the highest honor that may be awarded by a governor of North Carolina, in recognition of her efforts to improve public education for all North Carolina students.”

And it appears she is still doing her best to treat everyone well, in what is a tumultuous political landscape.  Good job, Rep. Torbett and Catherine Truitt.  Republican leadership looks good.