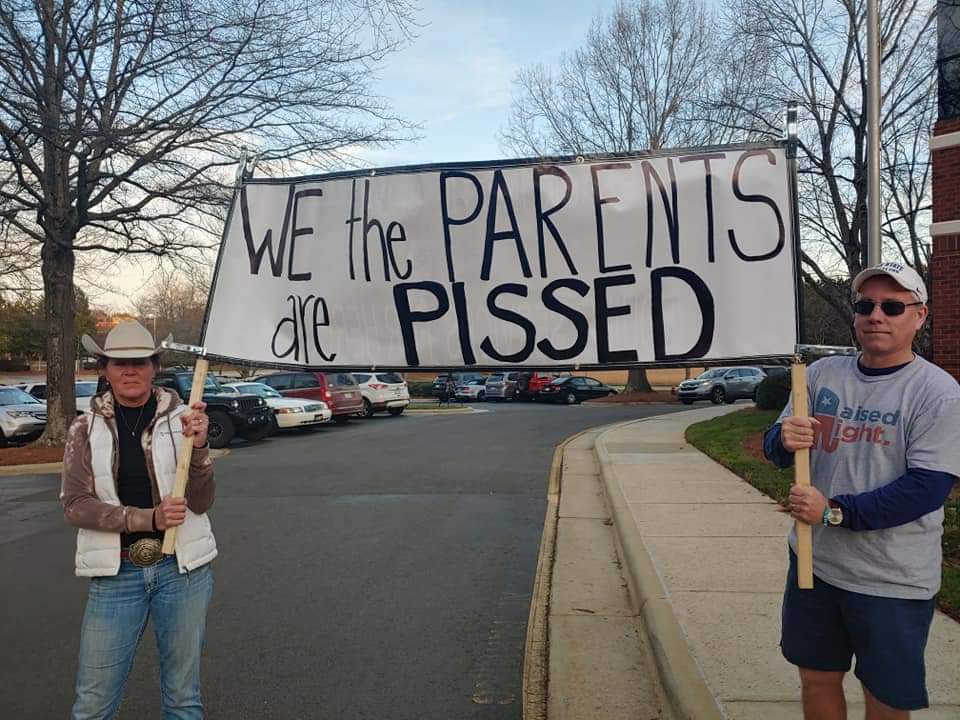 On New Year’s Eve 2021, when the scandal-ridden Wake County School Board passed a new policy to limit the number of attendees at upcoming 2022 school board meetings, a group of concerned parents who have been built a tight-knit association between themselves gathered on a social media ap to talk about their options for addressing the board with their months-long grievances.

Knowing that the School Board would meet to vote monthly about whether or not to continue the masking mandate on their children, the parents were not happy about giving up even the slightest- chance that they could possibly sway a board member into dropping the masking.

Other concerns for the parents are their children’s learning losses, COVID tool kits, their children’s mental health, and sexually explicit materials in school libraries.  The parents feel they are entirely ignored by the Democrat school board members, who oftentimes do not even look at the parents. When they do get a chance to address the board-but, they were not going to just give up.

In response to being cut out of the official board meeting- the group decided to host their own parent’s panel- ‘Board meeting” on Feb. 1st as the official Wake County School Board Meeting meet just across the street.

The official meeting was streamed into the room and played on a large screen that was behind the speakers.  Together as a group, they wanted the public comments at the real school board meeting.

The meeting was streamed live on GETTR:

Important to remember that if these parents were leftists- what they did would be applauded:

One member of the parent’s association, who now openly speaks her mind- spoke on Tuesday at both meetings.  She spoke as the director of the local Moms For Liberty chapter.

FROM WORRIED MOM TO CHAPTER DIRECTOR AND PUBLIC SPEAKER

“Before that first board meeting in August, when I was just a concerned Mom- I didn’t know any of these people,” Julie Page said to the crowd of about 100 parents who had gathered to hear the group’s plans for their alternative “board meeting”.

Page then ran across the street to speak – and took the opportunity then to shout out back to the group who cheered loudly.  Page explained to the board members, that because the official school board is not hearing them, the parents they have mocked are meeting themselves to encourage people to run for school board positions and to organize how to handle their grievances.

SCANDALS AT THE SCHOOL BOARD

Just one of the scandals for the school board that unfolded in January- was that Democrats in Wake County had posted a mocking meme about parents depicting them as racists- which was directed at the very same group of parents who had the alternative meeting.  The Democrats were mocking the parents concerns for their kids- and to add to the nastiness of it- two Democrat Wake County board members “liked” the harassing Democrat Party post causing the trust to deteriorate for parents even further.

SO WAS IT ANY WONDER WHY THEY HAD THEIR OWN MEETING?

Check this out story out about the nasty meme, as covered by a local education reporter, AP Dillion:

It is any wonder why Amanda Horlebein decided to organize a meeting for other parents as a chance to network and build support.

There were about 100 people in attendance of alternative board meetings at one point. Parents went back and forth between the meeting and gathered in the hallway to network.

The meeting was hosted by activists from a group that has influenced North Carolina called Free The Smiles, by Moms for Liberty and parents who are running for school board now.

“I think there are a lot of parents out there who are afraid to stand up, or they don’t know how. I am glad we connected more parents with each other- at our meeting,” Horlebein told me on Wednesday.

Horlebein, according to the event invitation, made plans for parents to call in and make remarks about the school board meeting or to discuss topics that concerned them:

“Parents are tired of the lack of focus on education, lack of ethics, and arbitrary rule changes. Join us for the launch of the Panel of Parents on February 1st! Engage in dialogue focused on empowering parents and discussing solutions. Citizens will speak on a first come basis. If you are not comfortable with public speaking, please reach out about call in or off camera options. #Freethesmiles#MomsForLiberty#wakecountyschoolboard#wcpss

Below is a 4 part video series of their first “alternative school board” meeting.  By popular demand, the group plans to have another meeting next month.

Details about the group’s activism on issuing bonds and removing sexually explicit material was discussed on Tuesday night and is expected to be updated next month.

At the official school board meeting, the official board passed the very masking policies the parents have explained are causing problems for their children.