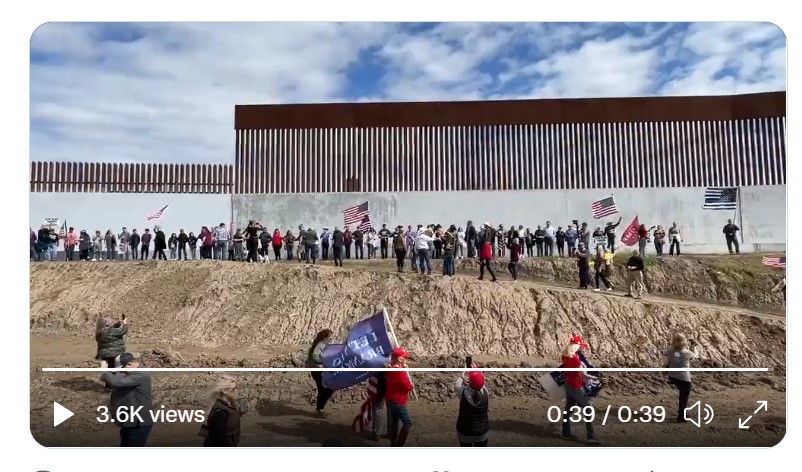 National Guardsmen said living conditions for Gov. Greg Abbott’s border mission are a disaster. And citizens in border towns are living in fear, while local law enforcement is frustrated at the number of crimes they are forced to ignore. Everyone is miserable, except for Drug Cartels and people who see America as a giant piggy bank for illegal immigrants.

And it appears that all concerned citizens can do is pray to God something changes, because neither the Democrat President or the Republican Govenor care about their pain.

While singing Amazing Grace, an embattled community of American Patriots in, Mission Texas, walked in unity together toward the security wall that separates Mexico from the United States in a peaceful protest of the open border policies of Democrat Joe Biden. The message is also out of frustration with their state’s Republican leadership, for his inaction to help law enforcement in border areas.

“The governor has sent waves of troops to the border as Guard officials scramble to execute a massive mobilization that would normally take months to plan. Some Guard members say the operation has set back their income, education and well-being,” a recent article in the Texas Tribune reported about a devastating situation in the state.

“Greg Abbott’s ‘Operation Lone Star’ fiasco is the biggest story in Texas. -10,000 guardsmen sleeping in trailers like sardines with no bathrooms -1 in 5 report lack of pay or benefits. -No cold weather gear -Many have no clue what their duties are”

Ben Bergquam, while on a recent assignment for Real Americas Voice, in Mission Texas saw the peaceful prayer protest, and identified the group’s participants as Women Fighting For American, at a WeStandAmerica event.

‘Amazing Grace’, first published in 1779, is a seemingly ageless Christian hymn. … It’s the simple yet powerful message of forgiveness, redemption and mercy from God, that has made ‘Amazing Grace’ one of the most versatile and enduring hymns in the world.

The patriot community in Texas are frustrated about Drug Cartels, rising crime, and the actions of Republican Governor Greg Abbott.