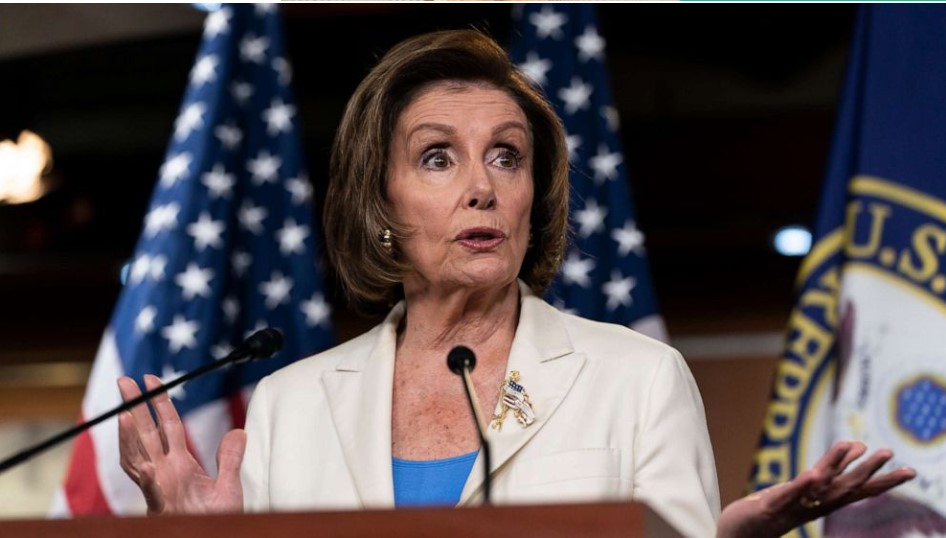 Radical far left US House Rep. Nancy Pelosi (D-CA) has been holding House Committee persecutions on Americans over the events at the US Capitol building in Washington DC, most likely to cover up for her nefarious actions that day- which many people feel were pre-meditated to make President Donald J. Trump and Trump’s supporters fall into a trap- so should elevate her narrative- and thereby divert attention into the long usurpations of our Republic, by the left.

While it appears as if Pelosi has been the queen of DC, orchestrating highly effective J6 House Hearings, that have resulted in the persecution of many Americans, she may be about to have the tables turned on her.

While her utopian House Committee has been the force to persecute some Americans severely- like the detainees who have been imprisoned in inhumane conditions in DC- and with the arrest of Peter Navarro, and as in the legal troubles for Steve Bannon, Pelosi may have been covering up her inaction to secure the groups of the Capitol- a new report says.

Just The News Reported on the report, on Thursday:
Internal Capitol Police review found sweeping intelligence and security failures on Pelosi’s watch Secret after-action report cited widespread ineptitude and inadequate riot squads and found the closing of the open-source intelligence unit may have contributed to the tragedy.

Capitol Police compiled a secret after-action review months after the Jan. 6 riots that identified sweeping blunders by the department ranging from delayed deployment of specialized civil disturbance units to the fateful dismantling of an intelligence unit that monitored social media for threats.

I reported on exactly the same idea on Jan. 6th, and after. The was no attempt at all in trying to make the grounds secure on Jan. 5th or after.

Solomon’s article goes on:
Identifying 53 areas of failure needing corrective action, the June 4, 2021 report, obtained by Just the News, produces a far more stark portrait of leadership failures than those offered by Democrat-led investigations, making abundantly clear that the Capitol Police under House Speaker Nancy Pelosi were ill-equipped to defend one of America’s most symbolic and high-value institutions two decades after the Sept. 11 attacks.

Specifically, the report stated that some Capitol Police leaders had received intelligence from outside sources like the FBI warning of the strong potential for violence, including the targeting of lawmakers, on the day Congress certified the 2020 election, but those warnings were not properly distilled into the operational plan given to front-line commanders or highlighted in the summary section known as the “Bottom Line Up Front.”

“The assessment for 1/6 contained a BLUF that did not express the severity of the threat or the fact that USCP actually had knowledge of a plan in place,” according to the report. “The statement that protesters may be armed was included, but it was never expressed with the urgency that they planned to overtake the Capitol and target Members of Congress.”

Instead of clear warnings to its forces, Capitol Police leaders put “a generic, all-encompassing quote” in the operational plan that was too vague to convey the true threat level, the report said.

That intelligence failure was exacerbated, the review concluded, when new department leadership installed after Pelosi became Speaker decided to dismantle the department’s open-source intelligence unit that scanned for threats on social media.

The lost window into the overt discussion of violence on social media prior to Jan. 6 may have contributed to the tragedy by further blinding commanders and officers to the potential for serious violence, the report.

“Individuals with the most experience extrapolating open-source material were not tasked with reviewing social media to glean intel related to the event,” the report stated.

“The social media unit was immediately and essentially dismantled under the new leadership,” it added. “New office reassignments and steering away from the concepts of having subject matter experts may have contributed to the tragedy.”

Senate committee, House committee and Capitol Police inspector general reports that were released last year during political hearings and guided by the testimony of the department’s leadership faulted the department in some areas, including intelligence and preparations.

But the internal after-action report was constructed from observations from 44 different submissions from frontline Capitol Police commanders and officers to its Coordination Unit, providing a specificity of failings and an unvarnished assessment of the senior leadership and its grasp on command and control during the crisis on Jan. 6.

“The recently revealed After-Action report confirms what I’ve been saying for years, that Speaker Pelosi and Congressional Democrats are not focused on the serious security failures that occurred under their watch,” Davis said. “Not only did the United States Capitol Police admit that their open source intelligence capabilities were essentially dismantled under a change in leadership within the Intelligence Division prior to 1/6, but the report clearly shows they had knowledge of the potential for violence yet failed to take the necessary steps to protect the Capitol.

“The Democratic Majority’s incompetence and unwillingness to fix long-standing issues was a main contributor to the security failure on January 6th. There must be immediate accountability and reform,” he said.