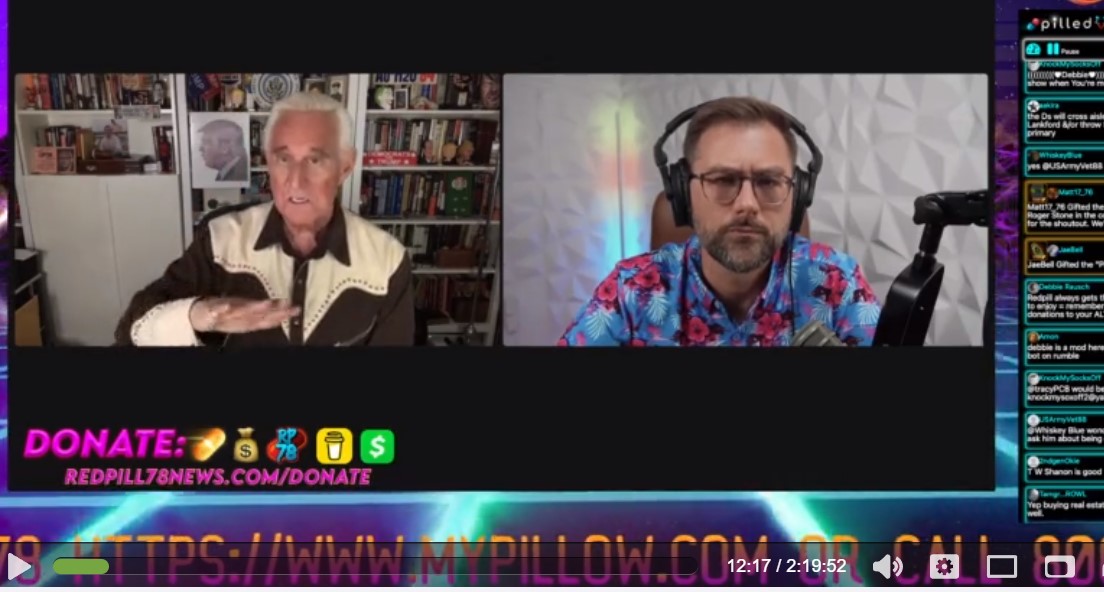 Roger Stone, at times playful but always tactical- appeared on The Red Pill News (RPN) Saturday night- for a late-night live stream on the popular Foxhole. Like old times- with a glint in his eye and fascinating hat on his head- Stone dished out shame on the dirtiest politicians, and their deeds over the past 40-50 years and promoted America First candidates to replace all of the bad guys called RINOs.

Fun but also very serious and strategic. Stone, a long-time political-strategic mind, is the perfect person to talk about party politics, as one of the few popular pundits who has actually been INSIDE the party and understands the workings of the machinery.

“People need to take back their local governments. School board and all other offices,” Stone told the show host. “The single most important thing everyone can do is share links to people you want to support,” Stone advised.

When asked what was the most important idea for the audience to take away- Stone said, ” I want people to know that I walk with Jesus now and I believe that I am working in service and we all have sinned, and I am right with Christ.”

Stone took the time to highlight a new weekly program segment on American Sunrise, on Real America’s Voice, seen Mondays at 9 am that is sure to resonate with disgruntled voters of both parties.

Roger, dressed ready to “cowboy -up” talked about the ‘RINO Round Up’ where he will discuss more of the sorted-out dirty details of what really goes on in Washington DC.

Stone spoke for over two hours- and like a firehose, he delivered insider info on the politicians he calls “dirtbags lining their pockets.” Stone took the opportunity to discuss with host Zack Paine his top picks for 2022- and then he answered questions from all over the country and he even took international calls with great enthusiasm, and that Stone brand sense of humor which was stolen from us by swamp creatures over the past 4-5 years.

But now he is really back in full swing and energized after getting new material from hanging around with President Trump at Mar-a-Lago, the epicenter of MAGA these days. Stone even admitted to the late-night audience that he thought an awful lot about dunking one persistent RINO into the pool at Mar-A-Lago but decided against it.

Stone opened the show by slamming Joe Biden, the establishment and RINOS, and talked about his plans for their replacements. Stone, has almost 5 decades in Swampy politics- and has a 4 part plan to save America.

“I am going to point fingers at people who are RINOS on the program. So you have to watch,” Stone told the audience, “and I will talk about the plan”.

“The answer we need is to get America First candidates, who will fight against McCarthy and McConnell and the left and if this group gets elected and hangs together- then they can have enormous leverage on the RINOs,” Stone said about the group of replacements for RINOS that he has endorsed.

“If the Senate can gain 4 America First Seats, then they could stall the work of the Democrats,” he said, “And there are two Senate seats up in one state this year, making it the state to watch.”

Stone said Oklahoma was the most interesting to him because of those 2 Senate seats up at the same time, Stone slammed incumbent Senator James Lankford- for certifying the 2020 election for Joe Biden- for apologizing to Black Lives Matter, for being Open Borders, and- worst of all for being open to a third impeachment on Trump.

“Oklahoma is the RINO Daily Double. Both Senate seats will be open this primary,” Stone said. “Lahmeyer is the America First candidate.”

Stone talked about Lahmeyer’s plans after he wins – that Lahmeyer will cut off funding on schools that push CRT, be vigilant over Oklahoma land owned by Chinese – and not like ‘ Lookaway Lankford’ who appears to not notice these problems for people.

“Cawthorn knows members of congress- and yes- these parties go on, you have to wonder why people are silencing him.  Swamp creatures are scared, but he is telling the truth.  McCarthy who suspiciously lives with Frank Luntz, who is the ultimate swamp creature shouldn’t be talking about Cawthorn,” Stone said.

People are still trying very hard to silence Stone. The lapdog media, the establishment, the RINOS, and the left have devised a new plan to keep him quiet- more charges about allegedly planning Jan. 6th with two Trump aides. But he doesn’t seem at all phased.

Stone said that he hasn’t spoken to Peter Narvaro in three years and has never spoken to Mark Meadows, the two other Trump guys who are being harassed by the US House Committee on Jan. 6th.

Stone claims the new attacks are to distract from the Democrat’s disasters- like gas prices, Southern Border, and other disastrous moves by Biden and the Democrats.

And Stone dished the dirt on one of his top RINOs, Republican Senator from South Carolina, Lindsey Graham.

“The Daily Mail broke story that Lindsey Grahm called White House in rage on Jan 6th and talked to the council of President to threaten to use the 25th amendment- to remove Trump in a lavender rage. But then Graham was photographed with Trump at Mar-a- Lago a few days later,” Stone reminded audiences.

“I was recently at Mar-a-logo at a cocktail party near the pool, and Lindsey Grahm was there again- and I could have very easily pushed him in the pool- but secret service was there and everyone would have been soaking wet. So, I did it in spirit- I asked myself- why is this little Rino there?” he said, talking about his thought process that night.

“I remember Graham’s work with John McCain-and how he then deified him on death- and the media pushed that phony story. I respect McCain’s service but not everything about McCain’s conduct was honorable.  McCain dumped his first wife- for the young blonde beer heiress who funded his first race.  Then he become a neo con- and it is hard to be more neocon than the Bushes,” Stone said, smashing McCain.

Stone talked about his plan to save America. (For more information www.rogerstonesplantosaveamerica.com)

And in typical Stone style- he spoke the “Stone Cold Truth” about how he seems the Democrats getting tired of Biden and would welcome getting rid of him from DC.

“I believe that Democrats are tired of seeing Biden crap his pants, and his son’s corruption.   Biden is dead weight to them and they will use the 25th amendment on him for his own good- then Kamala would be POTUS,” Stone said.

“The we get articles of impeachment for Harris- on.. oh take your pick, crimes against humanity, involvement with Hunter Biden by helping with Chinese business deal,” he said. “Trump would become POTUS that is my plan for America and anything is possible.”