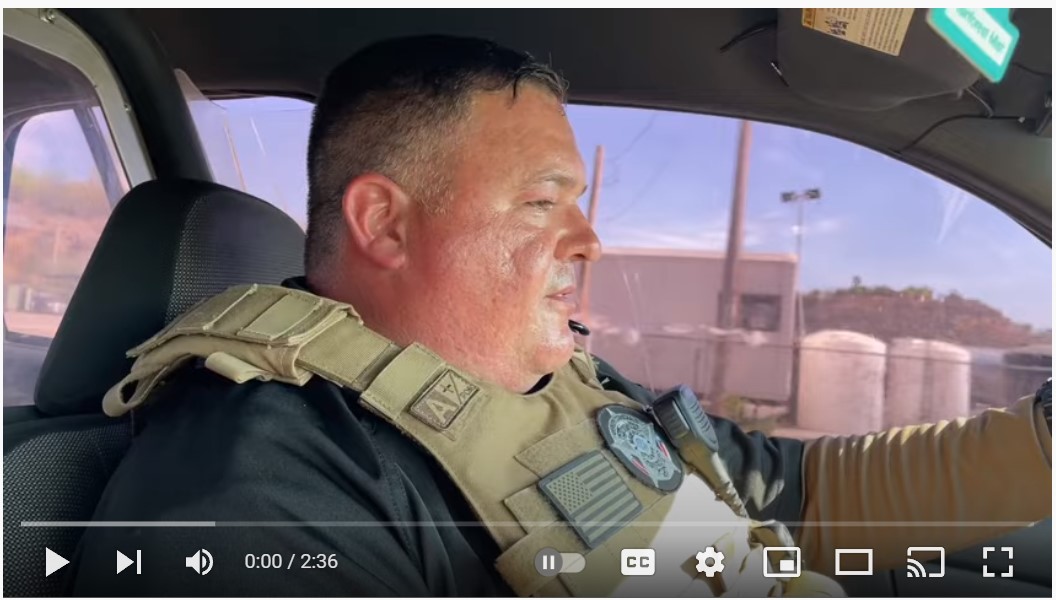 Democrat Joe Biden is turning the US Southern border into a crime-infested death zone and few people are being courageous enough to talk about it- but Ben Bergquam, investigative reporter for Real America’s Voice and founder of Frontline America is getting the job done.

Please share Ben’s work with everyone you know, so there is a chance that Democrats will hear the news about what their open borders enticements do to poor people from around the world, who will be drawn to the United States, and preyed upon- and perhaps killed.

And remember, with the Biden administration is trashing Trump era- Title 42- lifting all restrictions for any border security, border crossing business will grow exponentially.

Not only will crossers be victimized by Drug Cartels- to get close enough to try to cross over, they face very hard conditions that turn up dead people- because the conditions to cross are deadly.

Bergquam interviewed a man with vast experience seeing dead bodies in the rivers people have to cross, including very young children and elderly people.

And because of the financial incentives to the people who benefit from having illegals in the country- it is rare that anyone warns people not to cross, as Bergquam does with his courageous reporting.

NO END IN SIGHT- Reported by NPR, SO even the left knows
The Biden administration is moving to end sweeping pandemic border restrictions known as Title 42 on May 23. The official announcement came Friday in an order from the Centers for Disease Control and Prevention.

The spread of COVID-19 by migrants apprehended at the U.S.-Mexico border has “ceased to be a serious danger to the public health,” CDC Director Rochelle Walensky wrote.

Since March 2020, the U.S. Department of Homeland Security has used the controversial public health order to quickly expel migrants at the border due to health concerns related to the coronavirus pandemic.

DHS officials brace for a new surge at the border if pandemic restrictions are lifted
The Biden administration has largely continued this Trump-era policy despite criticism from immigrant advocates, who say the policy puts migrants in danger by forcing them to go to places like Haiti and Mexican border towns.

On March 12, the CDC announced it was dropping Title 42 for unaccompanied children, but left the policy in place for others migrants. Though under the Biden administration, DHS had already moved to exempt unaccompanied minors from Title 42. There have also been exceptions for many families traveling together.

The continued use of Title 42 had already been under scrutiny as the pandemic starts to wane in the U.S. Now Russia’s invasion of Ukraine has also altered the conversation.

Even before Title 42, asylum-seekers have been prevented from legally entering the country at ports of entry. As Ukrainians have arrived at the U.S.-Mexico border — they haven’t been able to fly directly to the U.S. because they don’t have visas — there has been mounting pressure on the Biden administration to change the policy.

Advocates for immigrants say the U.S. should be welcoming of asylum-seekers, wherever they are from. “We are asking to revoke Title 42 and welcome people, whether they are coming from Ukraine, Haiti, Cameroon, Central America,” Guerline Jozef, the executive director of the Haitian Bridge Alliance, said earlier this month.

The policy change could mean more migrants arriving at the border

There have already been high numbers of apprehensions at the border, even during the pandemic — a number affected in part by how Title 42 works. If a migrant is expelled at the border under Title 42, there’s no penalty or formal mark on their record. That has led many migrants to make repeated attempts to cross, hoping to avoid border patrol.

Border Patrol apprehensions hit a record high. But that’s only part of the story

Many expect that lifting Title 42 will propel even more people to try to cross the border. With that restriction gone, smugglers and cartels in Central America will likely tell migrants it means that the border is open.

In a letter to DHS last week, a group of Republican senators, led by Florida’s Rick Scott, asked about the agency’s preparations for “the anticipated surge of illegal border crossings.” They said Title 42 had been “an effective deterrent” to such crossings.

DHS Secretary Alejandro Mayorkas has repeatedly said that Title 42 is a public health measure, not an immigration policy.