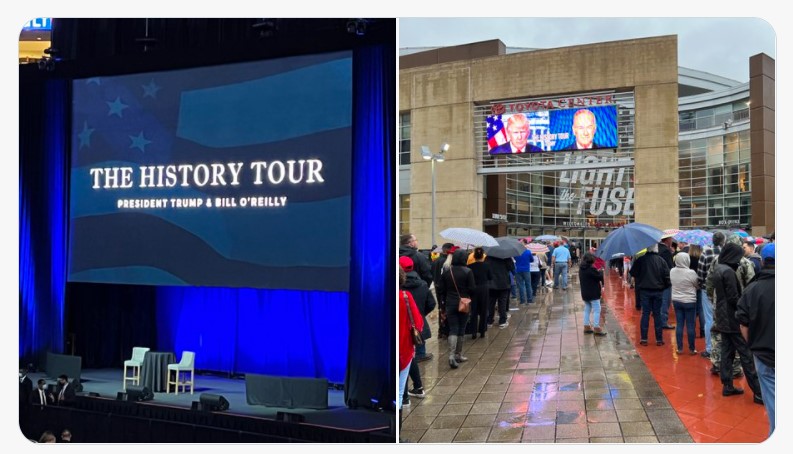 President Donald J. Trump spoke in Houston, Texas, and delivered a message of hope to his supporters. The leftist ‘regime propagandists’ tried desperately to cover up Trump’s warm welcome. Show host Bill O’Reilly and Trump’s Team were prepared to humiliate the fake news.

I reached out to someone on Twitter, who had posted how excited she was to attend the rally, I guess the regime media never thought of doing such a thing?

I was there till we found out him and bill oreilly was running super late. It was pretty packed but the weather was really bad. So people were kinda annoyed at the long lines and standing in the rain. I was contracted for a few hours so I didn’t get to see him.

Days before the event, the regime media tried hard to discredit the event. Bill O’Reilly posted that early ticket sales were robust.

Key Point: The leftist media has humiliated themselves, and they can not stop. Expect this to go well past the 2024 Presidential election, and wisely choose your news sources.

Let’s connect the dots about why the regime media is so eager to shill for the most disliked administration in the history of the United States:

‘I love this country’: Trump addresses supporters in Houston, derides Biden as soft on China, Russia

“In a public question-and-answer session with former Fox News personality Bill O’Reilly, Trump said he had recommended a day before the riot that 10,000 troops be deployed at the Capitol, but it didn’t happen.

“I would have insisted they had  proper protection,” Trump told thousands of supporters at the Toyota Center in Houston.”

Bill O’Reilly was the host of the event, he called the “Trump History Show” and reported about the attendance on his social media:

Trump associate Dan Scavino posted the impressive Trump motorcade that delivered Trump to the arena for the show. One poster noted that it was awe-inspiring for a ‘former president”.

Other footage showed a blistering rebuke of Democrat Joe Biden, with a wildly cheering crowd.

In a press release from his office, President Donald J. Trump showed a photo of a theater that looked quite full:

“A great evening in Houston, Texas-thank you! See you Tomorrow, Dallas!”

THE WHITE KNIGHTS OF LIES

However, Jeremy Wallace was not happy, and he posted photos he claimed were the opposite of what O’Reilly and Trump saw.

Being Fake News, Wallace tried desperately to hide the fact that the theater was crammed-packed with a highly enthusiastic crowd. Wallace’s Twitter feed was full of his attempts to twist what Trump said, thereby proving messaging for the regime- to the distributors of the propaganda, activist posters.

We are about 20 minutes past when Trump and O’Reilly were supposed to begin their talk. Here’s a look at the crowd awaiting their arrival. pic.twitter.com/JjAgBpUVOi

One such activist posted and projected that everyone else was propaganda- for not following Wallace’s take on things.

Video of the crowd at the Trump event tonight in Houston with Bill O’Reilly, taken 20 minutes after the scheduled start time. Attached is the photoshopped fake crowd in his propaganda photo. pic.twitter.com/Kxlt26nSmp

Another activist was very fragile over the looming ‘health crisis’:

Trump played an arena in Houston tonight which will time out perfectly with omicron surge and a power grid failure in six weeks. This is like a war in which the folks that are getting attacked don’t even know it, they line up to be cannon fodder for a MAGA hat & a selfie.

The desperation smells in this photo:

Five minutes before tipoff and this what it looks like around the arena as Trump and O’Reilly prepare to take the stage. Top sections are blocked off. Kind of looking like a Houston Texans crowd. Lots of room to spread out. pic.twitter.com/6edIj19d3B

Apparently, Wallace did not get the memo about the rain delay?  Or perhaps he was just really excited to push his narrative.

What really happened was thousands of people paid for tickets and were prepared for adversity. They traveled in stormy weather, stood in the rain, and waited patiently to show their support of President Donald J. Trump.

When Trump says that the left and the regime media are not after him- they are after Trump supporters- he is not fake news.