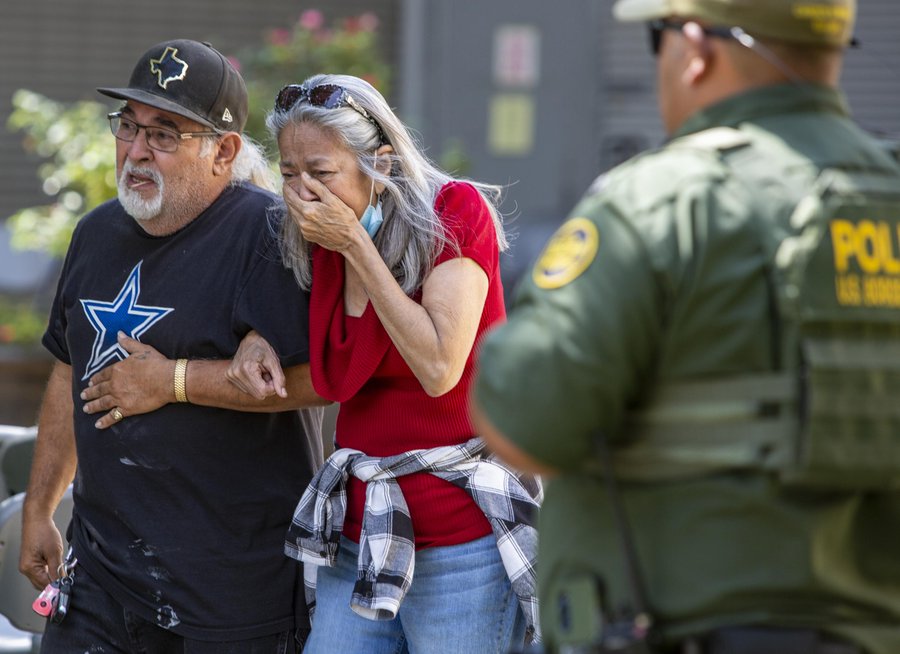 Customs and Border Protection is a ubiquitous presence in many Texas communities, and agents are often first responders. When they aren’t busy trying to protect Americans from the disastrous open border agenda of Democrat Joe Biden, they are saving school children from mass murder.

Of course, the left hates them and often makes their jobs very difficult- so America should recognize who the problem is in the country and who solves the problems the country has.

” Biden’s and the Democrat’s border invasion is making terrorism easier for Jihadis!” Ben Bergquam, host of Real America’s Voice show- Law and Border, posted on Twitter in response to the terrible news that was unfolding on the Southern border this week.

America is in danger of Jihadis and school shooters- and everything else. America is under attack.

Check out this video of the mass chaos from earlier in the week at a horrific shooting at aTexas elementary school until a Border agent shot and killed the teenage shooter.

UVALDE, Texas (AP) — Frustrated onlookers urged police officers to charge into the Texas elementary school where a gunman’s rampage killed 19 children and two teachers, witnesses said Wednesday, as investigators worked to track the massacre that lasted upwards of 60 minutes and ended when the 18-year-old shooter was killed by a Border Patrol team.

“Go in there! Go in there!” nearby women shouted at the officers soon after the attack began, said Juan Carranza, 24, who saw the scene from outside his house, across the street from Robb Elementary School in the close-knit town of Uvalde. Carranza said the officers did not go in.

Javier Cazares, whose fourth-grade daughter, Jacklyn Cazares, was killed in the attack, said he raced to the school when he heard about the shooting, arriving while police were still gathered outside the building.

Upset that police were not moving in, he raised the idea of charging into the school with several other bystanders. “Let’s just rush in because the cops aren’t doing anything like they are supposed to,” he said. “More could have been done. They were unprepared,” he added.

Agent ran into Uvalde Elementary without backup and gunned down Ramos

An off-duty agent from an elite tactical unit is the hero who shot and killed Salvador Ramos before he could continue his massacre. The agent, a member of CBP’s Border Patrol Tactical Unit (BORTAC), rushed into the school while the shooter was still active and began exchanging rounds with the gunman, who was barricaded inside a fourth-grade classroom, NBC and Fox reported.

The officer was injured during the shooting but he managed to “eliminate the threat” and kill the shooter before he could commit more carnage, law enforcement sources told NBC.

The agent, part of CBP’s Del Rio sector, was trained in a manner similar to US special forces. BORTAC agents are taught to handle terror threats abroad and other chaos, such as riots at ICE detention facilities.

And if that doesn’t keep them busy- there is always the regular border crimes they have to deal with.

Real America’s Voice correspondent, Oscar El Blue, reported on Thursday that a new migration is moving through Mexico on its way to Texas, where no doubt the border patrol is already engaged in protecting their local communities.

When Border Patrol radios crackled with a request for aid from local Uvalde police on Tuesday, it was nothing out of the ordinary. Agents often act as first responders to emergencies in their communities. The alert on Tuesday, however, was horrific: a gunman had entered Robb Elementary School.

Customs and Border Protection agents were among the first to respond to the mass shooting, in which at least nineteen children and two teachers were killed. That response speaks to the outsized role CBP has in small towns near the border, like Uvalde.

A CBP official told Texas Monthly that as emergency calls first came in, four agents with CBP’s Bortac SWAT team were investigating stash houses on the border to the west of Uvalde. The agents immediately responded, arriving at the school just before noon. Bortac (Border Patrol Tactical Unit) is CBP’s paramilitary force, an elite group of agents trained to exchange gunfire with cartels. Border Patrol agents not in the SWAT unit also rushed to the school, for more personal reasons: their own children were in the building.

But as the news came in, the heavy presence of CPB agents led some on social media to loudly question why immigration officers were so prominent on the scene. (Some of the posts conflated CBP with Immigration and Customs Enforcement, which did not respond to the shooting.)

The agents’ presence at the school was easily explicable: they are everywhere in Uvalde. CBP’s white and green SUVs are familiar sights around the town, which is fewer than eighty miles from northern Mexico, and thus well within the hundred-mile “border zone” where CBP operates. Like many Texas towns in this zone, Uvalde hosts a permanent CBP checkpoint, where agents stop and inspect vehicles going north along the highway. In a town of about 15,000, CBP is a major employer, offering about 150 unionized jobs with solid salaries and government benefits. Many residents have at least one family member or friend who works for the agency.

The Border agents are truly on the frontlines, protecting the country from very complex problems that face us and those crimes are things that unite Mexico and America.

And Joe Biden is not doing anything at all about any of it.