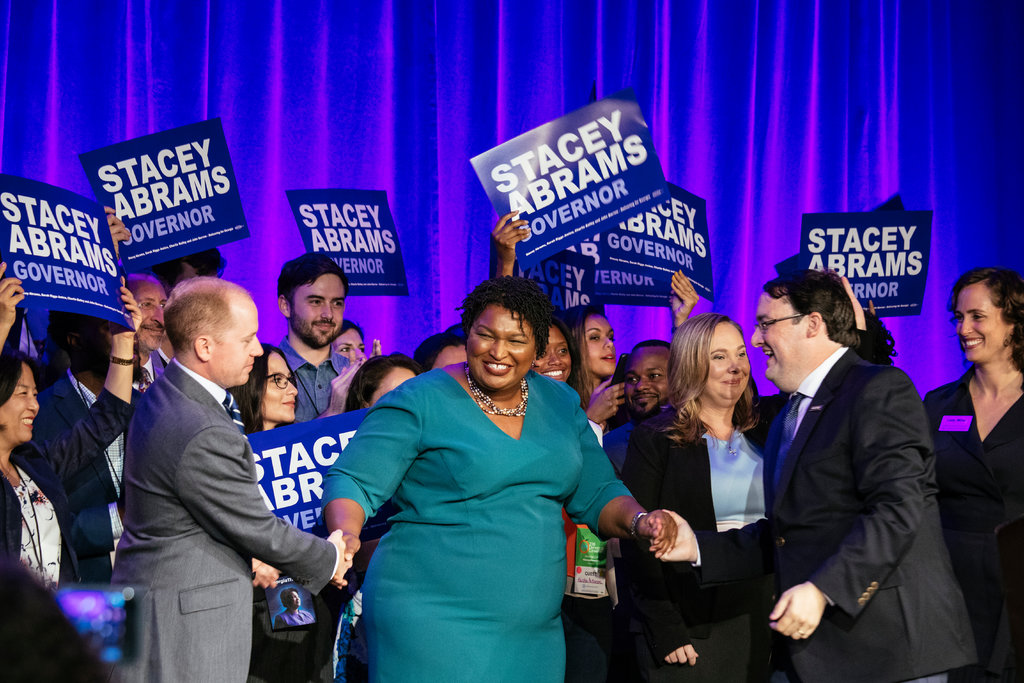 Stacey Abrams, who was instrumental in the disaster of the 2020 Presidential election, was celebrating the World Servies victory on Tuesday night as her political machines were falling apart.

It is general knowledge that Stacey Abrams helped design, orchestrate and implement massive voter fraud in the 2020 Presidential election by using ballot harvesting schemes and Community Organizing for radical Marxists. and, it was expected that her plans would win all future elections.

Even the AP admitted it in 2020, in their article, Southern Democrats aim to export Georgia’s 2020 success

Check out what lay people say:

Stacey Abrams gave the Democrats the blueprint. They failed to follow it.

WHY DO THE LEFT LOVE HYPOCRITES SO MUCH?

What is bizarre about Abrams’s victory dance is that she- just this year- threw a massive temper tantrum about the All-Star baseball game that was scheduled to be played in Atlanta and caused them to leave town, leaving many Georgia small businesses and sports fans empty-handed. So now she is happy about baseball in Atlanta? Oh- it must not be “racist” anymore.

CAN YOU FOLLOW THIS LOGIC? THIS IS THE LOGIC OF THE GOAT OF COMMUNITY ORGANIZING

In a stunning show of her hypocrisy Abrams, the Community Organizer and failed Governor candidate, posted about the World Series game that was held in Atlanta:

Congrats to #Atlanta on their fantastic win – taking the #WorldSeries 4-2! Well done! #BattleATL

And of all people to smack her down, was her compatriot and fellow politician in arms, in the 2020 Presidential election, the Republican State Attorney General who protected Abrams’s corrupted work, Brad Raffensperger:

This is a clown show.

When it was a political advantage to push the All-Star baseball game out of the state, to hold hostage lawmakers over the voter bill Abrams wanted, she threw her weight around behind doing that, and people obeyed her. Likewise, when it was a political advantage to shake down businesses and demand they promote her political messaging that baseball was racist in Atlanta, Abrams did what she does, and people obeyed her.

And Raffensberger was in a corner and silent – watching it all.

The Abrams All-Star boycott ended up costing the city millions of dollars and a massive loss of potential income for small businesses, who were still suffering at the time from COVID lockdowns.

At the time, everyone allowed Stacey ‘the great’ to have her way, in fear of the damage she may do to them, their families, and their careers.

Her political power was a legend, and it was generally assumed that she would emerge at some point as ruler of the world, with her ability to make Republicans, like Raffensperger, cry and beg for mercy.

And now it is safe to say, that Stacey is not really as powerful as she lead everyone to believe she was. Her “Southern Strategy” in the Bible belt, with attacks on churches, schools and American values has lost.

Tuesday’s elections were a rejection of Stacey Abrams, as much as they were a rejecting of Joe Biden.  Everywhere leftism lost. Americans got pushed too far, and Stacey was the one the left believed could pull off everything in the Democrat’s woke agenda.

From the AP article:

“Stacey Abrams spent years telling donors that Democrats could win in Georgia if they would provide the money to build a statewide political operation. In 2020, Georgia finally delivered its 16 presidential electoral votes to a Democrat, Joe Biden, and sent two Democrats to the U.S. Senate.

Other Southern states are now trying to follow, and Georgia is eager to help.

The Georgia Democratic Party is combining forces with other state parties in the region for joint fundraising appeals, aiming to help those states make earlier-than-usual investments in voter registration and field organizing going into the 2022 midterms. Abrams’ Fair Fight organization, which has raised more than $100 million since its inception after her 2018 loss in the Georgia governor’s race, is readying for another round of spending as well.

And it didn’t work. Stacey Abrams ‘has on no clothes.  Perhaps she can get a job promoting baseball.