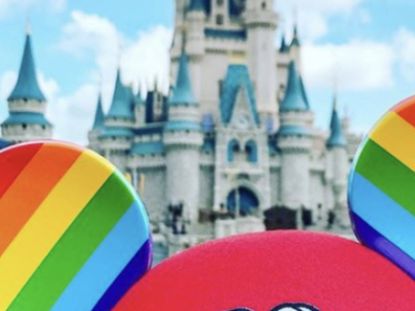 The Iconic American company that was started by Walt Disney, an American man who wanted to make a special place for a Dad to take his children for a playdate, has turned into a massive political messaging and marketing machine for a very radical and anti-American Marxist movement to confuse and disempower American children.

Trending news on Monday afternoon was the company leadership’s political opposition to a Parent’s rights bill that was passed by the elected officials of Florida and signed by the hugely popular Republican governor, Ron DeSantis.

The bill requires schools to not discuss matters of sexual intercourse, including homosexual play and transgender sexuality with children in Kindergarten through third grade.

In Florida, the age of consent is 18. It is illegal for anyone to engage in sexual activity with a minor, who is defined as anyone under the age of consent. Those who are found violating this law may be charged with statutory rape. It does not matter if the victim verbally consented or even initiated the activity, therefore it is questionable to many parents why their children need to be told about sexual activities and sexual identities at such young ages by strangers.

So the people wanted a bill, and the legislature voted for a bill and the Governor signed a bill laying out the legal issues surrounding teaching human sexuality to minors.

In Florida, we affirm the fundamental role that parents have in the education, health and development of their children. pic.twitter.com/81Xza0HAWa

The leadership at Walt Disney company claims that they will support a legal fight over the bill:

“BREAKING: The Walt Disney Company vows to help repeal the Republican “Don’t Say Gay” bill or get it struck down in the courts because the law “should never have passed.” RT TO THANK DISNEY FOR TAKING A STAND FOR LGBTQ STUDENTS!,” Occupy Democrats posted on Monday in response to the following statement by Walt Disney Company:

Walt Disney Company released the following statement on Monday in response to DeSantis signing into law the bill.

The Walt Disney Company, which has faced a significant backlash due to its slow response to oppose the law has just released a statement.

Florida’s HB 1557, also known as the ‘Don’t Say Gay’ bill, should never have passed and should never have been signed into law. Our goal as a company is for this law to
be repealed by the legislature or struck down in the courts, and we remain committed to supporting the national and state organizations working to achieve that. We are dedicated to standing up for the rights and safety of LGBTQ+ members of the Disney family, as well as the LGBTQ+ community in Florida and across the country.

Disney has come under fierce criticism for its apparent lack of action in fighting Florida’s “Don’t Say Gay Bill”, leading to Disney’s top executives taking to various platforms multiple times over the past couple of weeks in an attempt to clarify Disney’s position.

In response to the legislation, Disney has paused all political donations in the state of Florida and is increasing support for advocacy groups to combat legislation like the Florida bill in other states. Disney has also said it is creating a new framework for political giving that will ensure the Company’s advocacy better reflects its values and that Disney executives are on a listening tour in which leaders are hearing directly from employees on LGBTQIA+ topics.

Statement from The Walt Disney Company on signing of Florida legislation: pic.twitter.com/UVI7Ko3aKS