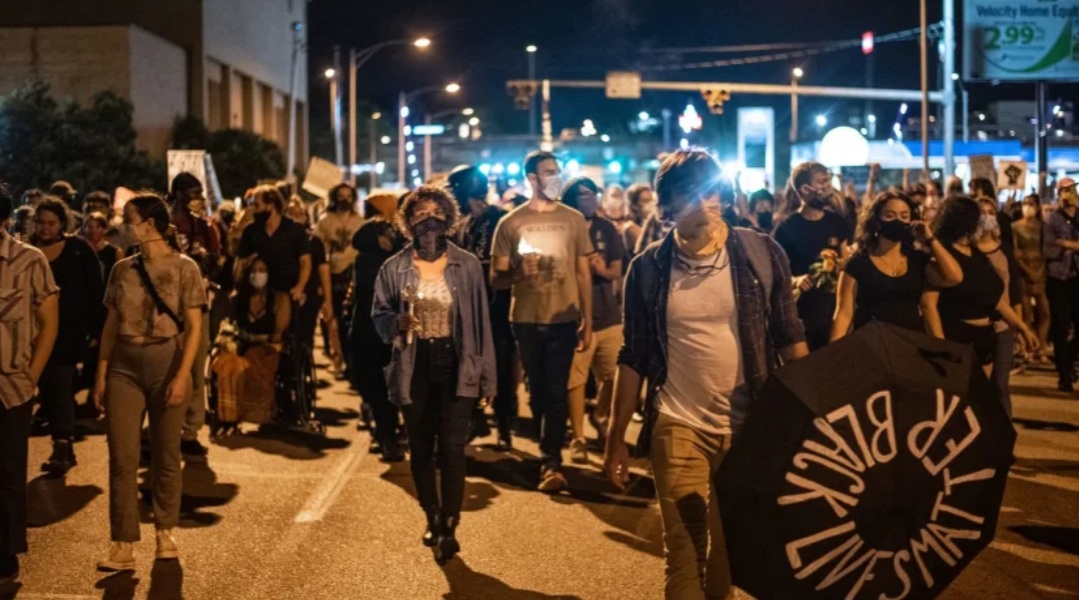 Ever wonder when the left will have had enough and gotten what they wanted?  Will, they ever feel that they have fair and “equal rights” established between America’s many different groups- and just STOP?

The answer is no- they won’t.  And we should prepare for that.

Being diverse in culture, heritage, and ideas is supposed to be America’s most vibrant and greatest strength- but instead, it is a gateway to Hell, division and infighting- because the left has a determined plan to exploit humanity’s weaknesses- and they do it all out of a lust for political power and control of wealth and natural resources.

Lauren Comele Morris contacted me after I appeared on Securing Freedom, a show hosted by Frank Gaffney on Real Americas Voice, where I explained to his audiences a police reform manual from 2004, written by Maya Harris West (Kamala Harris’ sister), distributed by Policy Link, and funded by the Charles Mott Foundation.

Here is the manual.

My purpose for telling people about the manual is to show that, 1) Democrat Joe Biden is lying when he says that he will Refund local police departments, and 2) the ‘Defund the Police’ movement was a long time and well-orchastrated plan, and 3)  to show interested parties the power of community organizing for overthrowing our Republic, in general- and 4) the mass corruption the left has exploited using Non-Government Organizations (NGO), Political Pacs and other nonprofits to fund what should be considered, at the very least intimidation, and possibly even-domestic terrorism.

Here is the show Morris watched:

In the 146-page Policy Link document mentioned in Gaffney’s show, is a highly detailed step-by-step plan on how to transform a city using the tactics of advertising, PR, marketing and journalism to change a community-even when it is against the will of the participants- the residents who live there- and even when it is illegal to do so.

In other words- what you are seeing happening on the left- as they steal our liberty, is a plan.  It is not a reaction to anything at all, including police shootings or inequalities between genders. Community Organizers are creating a myth around those two concepts- and they are doing it very well.

Community Organizing is just about raw power grabs with the intent to create a new system, but it is a profession that excels at stagecraft, mass media, psychology and other forms of gaslighting and deceitful manipulations.

Morris identified to me that certain activists that she had been following were walking out in real life- in Austin Texas- the plan that has been laid out in the manual I described.

I took a peek at the Community Organizer in Austin Texas who she Identified, and I think she is on to something big.

I checked out her site, and I was pleasantly shocked when I read her highly professional investigations into the Marxist movement in Texas. She told me about the murder rate in Austin- as a result of the “police reform movement’, led by Community Organizer Chaz Moore- and how that weakness in the area- created more chaos for everyone, which was then exploited by the left as fertile ground for the violent transgender movement now.

Morris’ excellent work can be found at:  www.laurencomelemorris.com and www.thecentristproject.org

According to a recent update about what she has connected from Austin, where there is a determined LGBTQ+-trans movement to usurp voter’s rights with virtue-signaling demands, as noted in the recent story I covered about US House candidate Jeff Younger (links at end of the story).

Here she expertly describes what is happening in one of America’s most vibrant and important music capitols. Remember- music is a top cultural resource and method of communication- and the left has it’s sights on using that for transforming our communities- and getting out the vote for their candidates.

HERE IS HOW THE LEFT DOES IT ACCORDING TO MORRIS:

Austin Musicians have ZERO clue what is happening to the music sector. This year, the enemy moves its tentacles into the bands themselves!

Whimpering Austin Police Association’s Ken Casaday recently made the suggestion that Austin should cancel its special events due to police understaffing and the 19 officer indictments. Does he sincerely fear terrorism, or is it because he is the controlled opposition for the Austin Marxists? This cancel culture move is exactly what they want.

Austin’s powerful Marxists and BLM 501c3 activists want all of Austin to turn filthy, ugly, crime ridden, and communist. They are being paid millions of dollars to do just that thanks to Mayor Adler.

In the summer of 2020 our beautiful music scene was indeed replaced with marching Red Guards on distorted bullhorns yelling “F the Police”, and “burn it down”, while actually being given a police escort. It cost the city millions. Chas Moore praised the destruction of “your little hippy bars”. When Adler lifted the camping ban, our parks were filled with burning toxic trash, violent machete gangs, panhandling drug addicts, mass shootings, and a COVID lockdown that filled downtown with all the above running many venues right into the dustbin of history. BLM parked its bus right up on City Hall and adorned the grounds with a tent city patrolled by the local DSA. BLM now has a storefront on 6th street in one of our decapitated venues.

Yes, let’s just cancel the Austin culture entirely because people lack the brains and the bravery to stop people like Chas Moore and Joyce James and their foot soldiers and boardroom pit bulls! Just keep taking the knee like Mayor Adler did when he raised his fist of power in the air in 2020.

Let’s just keep dividing the Live Music Fund and punishing accomplished white musicians who ARE the Majority of the players.

Let’s just keep the white supremacy oversight committees and the equity commissions scorecarding our venues for their “undoing racism” classes when the musician demographics don’t support their ridiculous demands for every band to end up with a transgender multi-ethnic woman identifying bassist. Let’s just continue down the Mass Line path straight to Marxism because this is exactly what this is . . . the Mass Line. And let’s just let the Austin Justice Coalition take control of construction pay applications in the transportation dept., issue threats to the economic sector, oversee the judges, the courts, the police staffing, the decriminalization, the homeless, and the prisons.

What else is going to happen until Austin wakes itself and stops conceding and paying tyrants and frauds?

The last two posts from our new Police Chief and Ken Casaday are disgusting capitulations. They are kneeling, they are apologizing, they are conceding, and they are paying. Joyce James has an over $2.5 million dollar contract to teach “undoing racism” and critical race theory to the economic sector and to our police officers. It is the communist hammer in full display and she is paid $10,000 every day she works according to reports.

If you are a venue in need of COVID relief money, you have to sit through three days of “undoing racism” classes and be scorecarded on your white privilege. I called this in 2020 when I wrote my article on When Equity Rules the Music City.

It is much worse for APD. Our new police chief thinks that equity is equality and our police union is serving the Marxists by suggesting we cancel events on the eve of SXSW.

This year, they are moving their tentacles into the bands themselves.

Look at the screenshots. No “systemic white male advantaging” allowed!

Friends, I am a lifelong musician. Austin has been very good to me. I have had many successes, honors, opportunities, the best education, and have worked with the finest of musicians on many projects.

Austin is broken and bleeding and there is no end in sight. It is not going away.

The music unions and commissions should be educated on their enemy. They need to stop looking the other way and take up a sword and fight.

If you have any contacts in the community, in legislation, in the unions, anywhere, I am taking names.
Please help me help Austin.

Remember- to the left- they have the moral authority to invade public schools, even and indoctrinate very young minor children. And when it comes down to it- once a local police department has been dismantled, and there is no religious thought or expression allowed, and people are scared to death of not virtue signaling properly- least they get beaten up or killed—– will they really care about how the government is using taxpayer funds? Or who is in office to spend those funds?

For further reading on what is happening in Austin: