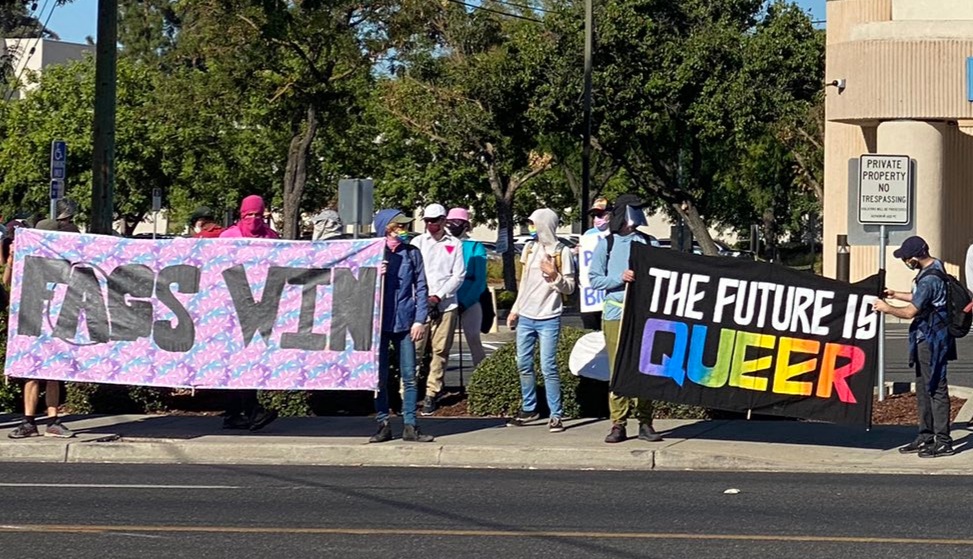 Straight pride is being met with violence in California by protestors who claim that “Queer is the future”, and who are worried about free and easy abortion, which is ironic to people who are paying attention.

The protestors claimed that heterosexual Americans displaying their pride in being heterosexual was an affront to their homosexuality.   It seemed to make sense to the local leftist media who covered the event.

On Saturday, a number of people gathered to promote their lifestyle of heterosexual relationships, safe child rearing, and families, and they were met with violent attacks by people who believe themselves to be caring and charitable humans.

Local news covered the details of the uprising :

“A couple of fights broke out between those protesting and counterprotesters around 11 a.m. and police declared it an unlawful assembly, authorities told KCRA 3. Authorities said someone lit a nearby shrub on fire.

Of course- all heterosexuals are ‘alt-right and white supremacists’.

The derangement of the left continues.

Andy Echleman, an ‘equity’ reporter for the Modesto Bee reported his point of view about the uprising:

Insults turned to violence on Saturday as what appeared to be 10 or fewer participants in a National Straight Pride Coalition rally clashed with over 200 LGBTQ and pro-choice counterprotesters in Modesto.

It’s the fourth consecutive year that straight pride demonstrators have assembled in front of the Planned Parenthood building on McHenry Avenue, and like last year, violence quickly ensued. By 10:30 a.m., a man visiting from San Jose, with a sign “Jesus saves from hell,” preached while a mass of people across the street with rainbow signs and women’s rights banners chanted and jeered.

Police officers quietly assembled on bikes as patrol cars crossed McHenry Avenue. TOP VIDEOS Continue watching after the ad × The loudest thing of all was Modesto Window Tint, which blasted banda music from its outside speakers.

“We’re neutral. We’re just window tinters, man,” said Tony Manriquez, one of the owners, after counterprotesters asked him to raise the music to drown out the preacher.

As the chants got louder, Manriquez changed the song to “We Are The World,” the 1985 peace hit. The happy music didn’t last.

A scuffle ensued as a Proud Boy attempted to push past the police, said a man who gave his name only as Richard. He said he watched the violence as a “straight pride” supporter but did not identify as a Proud Boy himself.

A blast went off, and a firework ballooned from the street in red streaks. Modesto Police Department spokeswoman Sharon Bear could not confirm the order of events Saturday afternoon but noted that the demonstrators were not part of the official straight pride rally because that was planned for noon.

Bear confirmed that a bush caught fire, leading the police to call the event an “unlawful gathering” and clamp down. More than 25 police officers armed in tactical gear descended on the scene.

Police fired pepper spray bullets into the rainbow-clad crowd of counterprotesters, reportedly injuring at least two people who were whisked away by volunteers. Police also used bean bag guns, which looked like orange shotguns. Today’s top headlines Sign up for the Afternoon Newsletter and get the day’s biggest stories in your inbox.

Four people were detained, but only three were arrested as of Saturday afternoon, for “failure to disperse,” Bear said. Two were aligned with the initial straight pride rally, and one was a counterprotester, she said. None of the people arrested were local to Stanislaus County.

“They came at us with batons, they jabbed us, they hit the crap out of out us,” said one counterprotester who was hit with a pepper-spray bullet. He declined to give his name. Volunteers had flushed his eyes with water, but he was still wheezing. Modesto Police Department and Stanislaus County Sheriff’s Office presence grew as officers formed a line, pushing counterprotesters back. Behind them, the MPD armadillo, a black SWAT-style truck equipped with cameras, pulled up as officers closed McHenry Avenue from Coolidge Avenue to East Orangeburg Avenue.

The straight pride supporters had moved behind the police line and were standing in Wendy’s parking lot. Nearby, one person was loaded into an ambulance. It was not clear whether the individual was injured or fell ill. As police pushed counterprotesters toward Orangeburg, crowds started walking on to Five Star Inc., a used car dealership with polished trucks surrounding the building.

“I feel like I’m not making any money because they messed everything up for us,” said one employee, who declined to provide his name. Naomi Bingham Walker and Odette Zapata came down from Sacramento on Saturday morning in a caravan with other friends who support LGBTQ and women’s issues. For Bingham Walker, a queer black woman, showing up was about fighting against what she says is “the increase in white supremacy and hatred in our country.”

Zapata chimed in as the police nearby continued to push counterprotesters back. “We have two armies to go up against when we stand for our rights: We have to deal with the cops attacking us and we’re about to get a second wave of right-wing extremists. We’re fearful of them attacking us as well.” Despite the 90-degree heat, Zapata had on a sweater to conceal the bulletproof vest she was wearing. “If they see you wearing it, they will automatically detain you,” Zapata said. Nancy R. from the Answer Coalition calls out during an impromptu march through Modesto streets after police dispersed the protesters gathered at the Planned Parenthood office on McHenry Ave in Modesto.