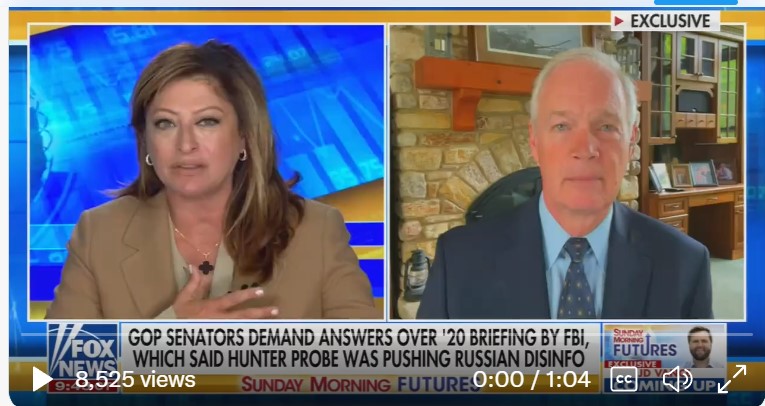 US Senator Ron Johnson appeared on Maria Bartiromo’s show to discuss details of his allegations that the FBI targeted him and set him up for a media smear campaign over Johnson’s investigation into the laptop of Hunter Biden.  The laptop had massive amounts of crimes, and was being suppressed by the FBI at the time of a hearing to protect Joe Biden from fallout.

Johnson says he was set up the FBI with a fake briefing in 2020, and the minutes of that briefing was leaked 9 months after it happened, and  that leak is being used today to smear him ahead of his own November re-election.

Key Point: We have a lot of evidence that the FBI created a false story in 2020, that the information coming out from Hunter Biden’s laptop was ‘Russian disinformation,’ but that doesn’t stop the corrupt lapdog media from continuing to use the lie to smear their opponents in 2022.

“If you tell a lie big enough and keep repeating it, people will eventually come to believe it. The lie can be maintained only for such time as the State can shield the people from the political, economic and/or military consequences of the lie,” Joesph Goebbels famously said.

“The FBI is interfering with my election and I am being smeared again and called Russian dis-information. The FBI interfered in the 2020 election, and at the time the FBI leaked a briefing they had, that claimed I was a tool of Russia over my investigation of the Laptop. Democrats want me out. They know I will investigate their corruption and they have spent 50 million dollars to defeat me,” Johnson told Bartiromo on Sunday morning.

And he is right- check out this example from a local WI media group, Up North News WI, who are casting Johnson as guilty for being a part of disinformation- that we know was not disinformation:

“Johnson spent much of the 2020 presidential campaign trying unsuccessfully to link the Hillary Clinton campaign or President Joe Biden’s son Hunter with the spreading of Russian disinformation—claims repeatedly debunked. The FBI went so far as to warn him that he was a likely target for Russian attempts to sow division in the United States. Johnson not only ignored it but said he believed the FBI was acting in coordination with Democrats to create a warning designed to smear him.”

“We contacted the FBI over the laptop, and they would never admit they had it. The shop owner got impatient because the FBI was not doing anything and now we know that the FBI had it all along. We need to get to the bottom of who drafted the letter about the Russian disinformation,” Johnson said.

Here is a transcript of his interview:

Meanwhile, the 51 for intelligence officials who say In a letter that claimed the laptop was Russian disinformation five days after the New York Post broke the story, and they have yet to apologize or retract their statement.

I had on this program, John Radcliffe, the then sitting Director of National Intelligence, who told us that the Intel letter was a lie and that the 51 who signed their name to, this was wrong. And that in fact, it was not Russian disinformation, he told us that on this program and on Fox Business mornings with Maria.

Senator Ron Johnson has been investigating the laptop and the business deals of the Biden family from day one.

Johnson: Well it’s another piece of the puzzle of the politicization of these federal agencies. You know the weaponization of federal agencies began under the Obama Administration with Lois Lerner weaponizing the IRS against Obama’s political opponents and the partisanship she just continued -let’s say the exoneration of Hillary.

The same cast of characters inside the FBI, that then immediately went into Crossfire Hurricane. We now know that as early as October 2016 is certainly as January 2017, the FBI knew full well the Steel Dossier was tainted with Russian disinformation.

How do we know that? Because my staff uncovered the classified footnotes to the Pfizer report that completely shows the partisanship, the Mueller probe never should have happened,” Johnson told Bartiromo.

Johnson then told her about a 2020 briefing with the FBI that he was subject to about the laptop.

The FBI, basically, saying we have targeted disinformation, all of our investigations was based on US persons and US documents.

Now, the briefing was completely unnecessary. I know is a setup to this day. Even though we’ve asked repeatedly in public letters, who directed that briefing, we have gotten no answers.

And then nine months later, they leak that briefing to smear me to the Washington Post.

WATCH Johnson talk about the details:

Bartiromo: The results are fifty percent for Barnes, 46 percent for Johnson in the Wisconsin senate race.

Johnson: Well, yeah, because they’re in the election by leaking that briefing basically saying I’m a Russian tool, which I am not a completely false accusation to Wisconsin, press picks setup and their people in Wisconsin. Think I’m a tool, Vladimir Putin. Nothing could be further from the truth that they have smeared me publicly and they just might impact the 2022 election here in Wisconsin as well, because, let’s face it I would be chair of the Judiciary Committee and have some hard investigations.

They know I will investigate their corruption. So, Ron Johnson for senate.com, I’m gonna need a lot of help. They have already spent more than 50 million dollars, smearing me and of course, the FBI is part of that process.