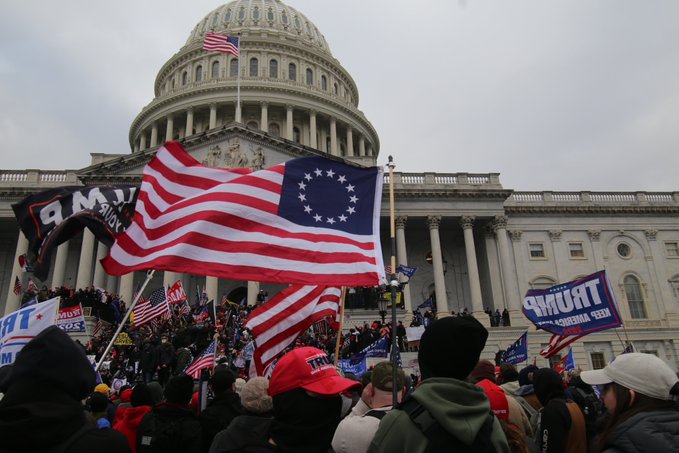 Court documents about January 6th at the US Capitol have surfaced, proving that the narrative set out by the US Government over the unfolding events that day is being purposefully crafted to not explain the truth to the American people. In their own lawsuit, they admit they are withholding evidence from people they are charging with crimes.

Consider this passage from a lawsuit: United States Vs. Pastor, New Mexico Commissioner, and high profile Trump supporter Couy Griffen – ask yourself if law enforcement tried to stop people from gathering at being at the US Capitol (pg.12):

“Further, we are not in a position to turn over the universe of information we possess for Defendant to review. Although we are aware that we possess some information that the defense may view as supportive of arguments that law enforcement authorized defendants (including Defendant) to enter the restricted grounds, e.g., images of officers hugging or fistbumping rioters, posing for photos with rioters, and moving bike racks, we are not in a position to state whether we have identified all such information. Pursuant to Brady and its progeny, we are required to make available the voluminous data that may contain any similar information for Defendant to review.”

Techno Fog, who I have confirmed is an actual lawyer, posted on his Telegram page recently:

“This is a huge admission from the Gov’t on the January 6 cases:
“We possess some information that . . . law enforcement authorized [people] to enter the restricted grounds, e.g., images of officers hugging or fist bumping rioters, posing for photos with rioters, and moving bike racks.”

My eyewitness reporting was that the people at the bike racks on the backside of the Capitol were driven there and were waiting patiently to be allowed through, believing they had been invited there,  and were safe to be there because guards were present and never tried to stop them,  even tho a fake struggle occurred for a few seconds, it was intentional that people were trying to get through, and felt like a movie set.

There were cars, some with giant speakers, and flimsy bike racks everywhere, and spectators standing peacefully watching. pic.twitter.com/julbvCC6ZE

HOW WE GOT THERE: GATHERING PEACEFULLY

The crowd there had gathered in the space peacefully for at least 20 mins, which I personally witnessed and had been there much longer.  I witnessed a man on a bullhorn, and a man with a rolled-up paper “bull horn” who agitated the crowd about going into the building, saying that representatives had invited people in.

Two men tried to agitate the crowd directing them to go into the Capitol, telling them they had been invited in. One on a real bull horn, one on a fake bullhorn. pic.twitter.com/E9bAuwgvyt

A group of Trump supporters yelled down, “It’s a trick,” while someone started blasting the song, “We’re not going to take it anymore”- trying to get the crowd stirred up.

One group of people who had been up in a monument platform had told the crowd not to listen to the men with the bullhorn that it was a "trick". pic.twitter.com/lfeVrjfcs4

Some people started moving peacefully to the bike rack area, while guards started moving racks as if get the people to form a line, and then some scuffles started when someone pushed the bike racks for a min, then the crowd moved toward the Capitol stairs.  A few moving briskly, most moving at average speed.

People gathered at Bike racks and were let through. They moved very peacefully. pic.twitter.com/nnVN0w9Y86

There were guards at the top of the stairs, where people were directed to fill in the area and move around to the other landings.

This process took at least a half an hour, 45 mins for people to fill in and move to the stairs. The whole time everyone was very peaceful. Guards line the top of the stairs the entire time. pic.twitter.com/VLC4MsmJFM

The crowd filled in peacefully:

People were gathering peacefully, feeling they were being directed to be where they were. No one tried to stop them or rediect them. pic.twitter.com/5Gfy05egHw

People were allowed to fill in the areas at the top of the Capitol stairs.

People were allowed to go where they wanted and even directed. And people sat down and rested for a while. There was no violence or any order to leave. pic.twitter.com/PvIH9aVXV2

At one point, there was a loud booming sound and a cloud of smoke that appeared near the top of the stairs, but no one left the area. People in the crowd thought someone let off a firework.  It felt bizarre.

That was what happened on the backside of the Capitol.

I reported last week that on the other side of the Capitol, people were being directed to fill in the scaffolding as if they were extras on a movie set.