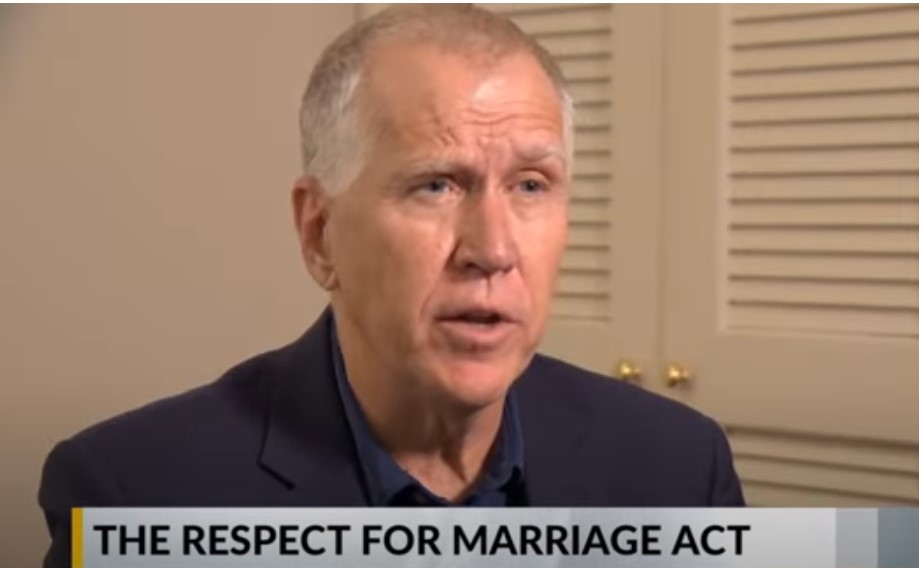 US Senator Thom Tillis (R-NC)  is facing an energized rebellion over his recent vote on the Marriage Act that could threaten his future plans with the Republican party.

Tillis voted in favor of a bill that is the opposite of what he ran on when he promised to stick to the Republican Party platform of family values and their definition of marriage.

“When Thom Tillis voted for same-sex “marriage,” he violated the NCGOP Platform and severely damaged the credibility of the party,” Isaac Burke wrote.

Burke was the organizer of a Tuesday night Twitter Space for party chairs to talk about their next moves to have the state leadership make a public censure of Tillis.

Burke’s co-host was Michele Woodhouse, a party insider who pushed to defend the grassroots’ values and wanted to censure Tillis over his recent vote.

The chairman of the NCGOP, Michael Whatley, according to numerous speakers in the space, told party members that he does not want to have a public censure of Tillis.

Whatley is reported as saying that he is against such a move because doing so will feed the Democrats and harm the party’s image.

The Party chairwoman from Davie Country talked about her disappointment with Whatley, saying, “If the majority of chairmen in North Carolina want the party Chairman to censure Tillis and to take a stand, he needs to do that. He must do this.”

Woodhouse reminded the group that if the chairs got together and demanded a vote, it wouldn’t matter how Whatley felt about taking a public stand; they would have to vote.

At least 4 of the 100 counties have officially moved to censure Tillis and released statements.

The ‘best-kept secret’ about the North Carolina Republican Party, that Tillis plans to primary firebrand Lt. Governor Mark Robinson for the Governor seat in 2024, was exposed Tuesday night in a Twitter space charm by party insiders.

Chairman Jim Womack, in Lee County, wants a censure with actual disciplinary action, denying Tillis some use of the party as a campaign machine.

“A censure could hold Tillis back from running against Robinson, which is what Conservatives want because they feel that Thom Tillis is not really a Conservative,” Michele Woodhouse told the group, adding:

“The desire to censure is very strong within the rank-and-file Republicans. Tillis is voting against the Party Platform, and it is unacceptable to us, and we want to represent the grassroots people who are frustrated at Tillis as a betrayal with his votes. “

“We raised money for him in 2020, and he barely won. If it hadn’t been for zippergate for Cal Cuningham he wouldn’t have won; we worked hard and he  betrayed us,”  Woodhouse said.

As of Tuesday night, the counties that have voted to censure Tillis are Onslow, Graham, Grandville, and Lee. More are expected.

“We need to take steps to protect our platform.  This is not the first time that Tillis has been too moderate and outside of the Republican platform. For example, marriage in our platform is clearly defined as one man and one woman,” Woodhouse said to the group. “Tillis has gone too far, and with his upcoming amnesty bill, he is planning more betrayal.”

Tillis is expected to push for amnesty next: