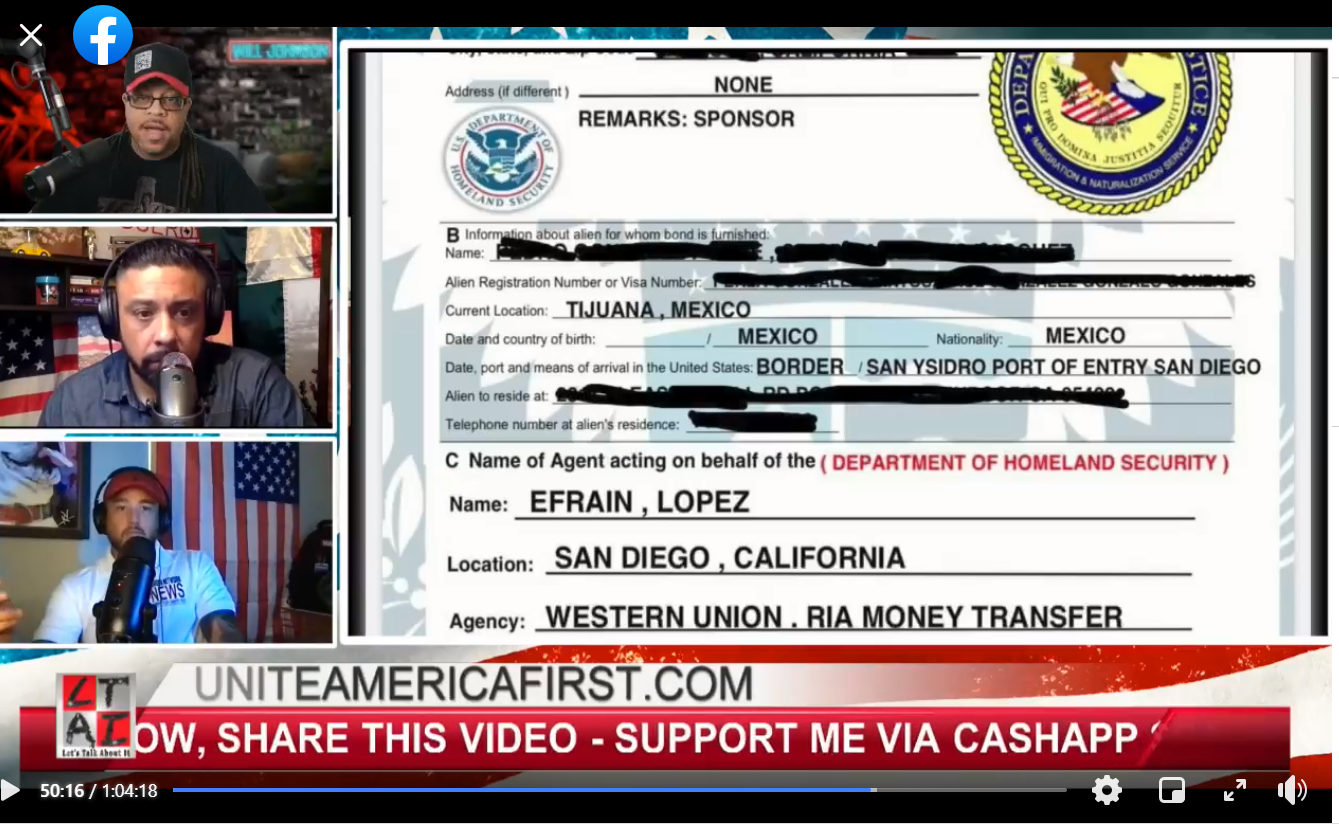 Ben Bergquam of Frontline American and his associates Oscar Blue Ramierez from Border Network News, Conservative Anthony a Congressional candidate, and Will Johnson founder of Unite America First, are working together to expose migrants and activists.

In the following videos are Democrat activists who may be committing fraud to get people across the Southern Border into the United States. In the first video is a confession of a Mexican man who is exposing fraudulent payments to alleged American NGOs which are creating fake legal documents with a seal of the US Department of Homeland Security.

“They are talking advantage of very poor people who some believe are doing the right thing by purchasing a bond to cross into America,” Ramiez said.

The group in question who is allegedly helping make the connection to migrants and people with fraudulent legal documents is called Al Otro Lado. The group according to greatnonprofits.com: “Al Otro Lado Inc helps to provide screening, advocady and legal help for deportees. Donate to this charity at GreatNonProfits.Org”

“The Government needs to do an audit on this group, we don’t know if they are involved in this mess, but Al Otro Lado is not being transparent. We need to know who these people are they are bringing into migrant camps, and what they are doing. Mexico could audit all of the NGOs. The American government needs to do something- they are using the seal of the United States for this lawlessneRamirezmierz said.

A whistleblower concerned for other migrants is seen on video, and it is translated into English, “Apparently they are stealing from migrants, and I want to tell my story so they stop poaching on the vulnerable. We paid people to help us and then they disappear. It is incredible how they are abusing people. I want people to know that people should not pay anyone for bonds, do not trust anyone. We wanted to get back for our kids. I am a field worker, a farmer,” said a man who has his identity hidden.

“People who are selling these fraudulent documents are afraid for their lives, because someone who might be related to the drug cartels has all of the information of very poor people, ” Johnson said. “Where are Biden and Harris?”

Will Johnson of Unite America First talks about fake documents from Homeland Security that are being sold. “It is unbelievale what these liberal activists are doing to these idignious people, they are creating fraudulent documents!,” Oscar Blue Ramirez said.

“This is so cold hearted, who lives a family of 5 people out in the street. These people tried to do the right thing, and these leftist groups, these NGO have zero oversight,” Conservative Anthony said.

FLASHBACK TO 2019- THIS IS WHY THE LEFT HATES US

Deconstructing why the left is going after these two activists:

A group of Mexican people are standing in line, according to Blue to get legal advice from a group of Activists from a group known as

“I am pro-Nationalist for Mexico. These people are not only undermining American, but they are undermining Mexico as well with these acts,” Bergquam said.

Reading a flyer from an American organization, Blue reads in Spanish that the group is there helping people with court dates who have been returned to Mexico.

Bergquam sees a worker from behind a wall, and asks her, “Why are you creating fake marriage licences and trafficing humans to undermine America sovereignty?”

A group of activists come out and confront Real America’s Voice and freak out. Speaking in both Spanish and English, they freak out at the idea of being exposed, saying they hate America.

One activist, comes out of the building to tell fight with Blue about them being racists. These far left radical leftists, Berquam tells them is endangering children

Please watch and share this video, and support this kind of journalism to push back on the Democrat’s open border policies that are destroying both Mexico and America.

CALL TO ACTION: Please share and support Bergquam’s journalism. Bergquam calls on the Mexican police to investigate non profits that are American who are undermining America in foreign countries.