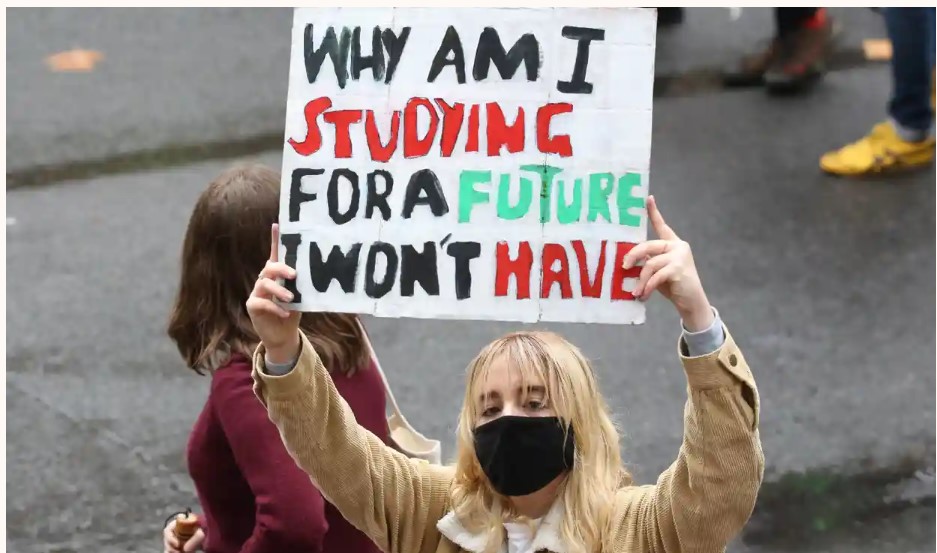 A fascinating op-ed was published by the Weather Network for Canada that highlights a massive national problem- that being Green Woke Marxism is killing people through depression.

As the symptoms of the climate crisis worsen, researchers have begun to look beyond the physical and economic costs of heat waves and other extreme weather events to consider the emotional toll of these events on youth.

Several recent studies have confirmed that worries about the climate crisis, and frustration over how governments are dealing with it, have had widespread mental health impacts.

One landmark survey on young people released in 2021 determined that nearly 60 per cent of respondents were “very worried” or “extremely worried” about climate change.

Countries that have been hardest hit by climate change produced a higher proportion of respondents with serious concerns, like the Philippines (84 per cent), which has faced flooding and extreme weather, and Portugal (65 per cent), which has endured devastating wildfires.

A full two thirds of respondents agreed that “governments are failing young people.”

Another study examined the increase in climate anxiety in British Columbians after the Western North American heat dome in 2021. The study determined that the heat dome provoked a 13 per cent bump in anxiety in provincial residents.

“Now that extreme weather events driven by global heating are becoming more and more frequent — like the heat dome, wildfires, and catastrophic flooding we saw on the west coast last year — it’s becoming harder not to think about climate change,” Dr. Melissa Lem, a co-author of the study, told The Weather Network.

Lem, who is the president of the Canadian Association of Physicians for the Environment, added, “Heat waves and wildfire smoke independently increase anxiety and depression in the general population, even if you’re not specifically concerned about climate change. So climate change and its effects have an impact on everyone’s mental health.”

The conditions worsened by the crisis — anxiety, depression — and the feelings deepened by it — anger, despondency, and despair — have been collected by some analysts under the term “eco-anxiety.”

More than a decade ago, the Australian philosopher Glenn Albrecht coined the term solastalgia in connection with climate migration, to suggest the loss of one’s home. The word combines the prefix solas, from the word solace, and the suffix algia, meaning pain.

As a phenomenon universal enough to inspire new language, climate anxiety is most concerning for its prevalence in youth.

According to Sacha Wright of the climate action and mental health organization Force of Nature, research conducted by their team found, “over 70 per cent of young people feel hopeless about the climate crisis, and only 26 per cent feel they know how to contribute to solving it.”

Kerry Bowman, professor of Environmental Ethics at the University of Toronto, agreed. “I see this among my students — the psychological fear of what the future will bring is significant.”

“One of the things that can paralyze us is the fear that there’s nothing we can do,” Bowman told The Weather Network.

It is true that recurring feelings of many respondents in these studies were “hopelessness” and “helplessness.”

If the solution to the crisis remains elusive, there are steps that those who are struggling can take to address their mental health challenges.

“It’s important to recognize that the feelings you’re having are normal, and to name and honour them,” Lem said. “In some people, these feelings can even help motivate them to action, as what are known as ‘constructive unpleasant emotions’ — a cue to change your behaviour.”

“Engaging in climate action, in the community with others, is a really good way to deal with climate anxiety,” Lem also noted.

But as youth begin to face real world experiences of climate change — the catastrophe of extreme weather events in their hometown, the news of so many displaced from their homes, the tally of thousands of animals killed in wildfires — they are also faced with the knowledge that things are destined to get worse.

Lem acknowledges that climate anxiety is both an acute and a chronic issue. “Scientists predict that the consequences of climate change are going to worsen until at least the middle of this century,” she said, “so unfortunately eco-anxiety is here to stay for at least the next few decades.”