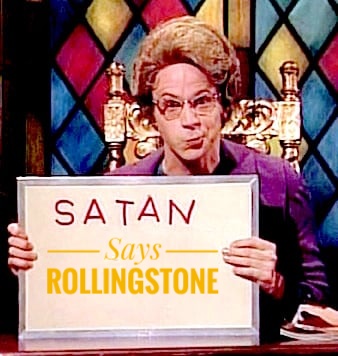 Am I the only one who has had enough of sports and music entertainment -turned Marxist propaganda machine shoving their Maoist-inspired shame tactics down our throats and calling it ‘music, political news and culture?

What culture?  Whose culture, I thought after reading the RollingStone today. It’s obvious that the left’s corporate media is attempting to bring a shame fest on free people. So what kind of people get into that sort of thing? Weirdos do. And paid political operatives.

I can not be the only one who saw the RollingStone article about President Trump and MAGA- and just wanted to jump into the arena. So- let’s talk journalism and media, dudes- because you are no Hunter S. Thompson.

You really are no gonzo journalists.

RollingStone used to be a place for dope souls and cool people, but now it seems to appeal to the sorts of old ladies that children would run and hide from. The kind slinked along public school hallways waiting to grab some poor kid by the collar and give out detention over their lack of ceremonial hall passes.

Do you remember that?

It is old lady hall monitors at the RollingStone.

According to their bio-, RollingStone is an American monthly magazine focusing on music, politics, and popular culture. It was founded in San Francisco, California, in 1967 by Jann Wenner and the music critic Ralph J. Gleason. It was first known for its coverage of rock music and political reporting by Hunter S. Thompson.

HA! Thompson would puke over the side of his car if he had to read the stale garbage that is in the RollingStone today; seriously, there is no journalism in that old rag anymore. Just pettiness.  Democrat Party paid talking points. That is what makes people so disgusted with the corporate media.

About journalism…there are reporters and writers, Thompson always said.

The Paris Review wrote in 2020, “In an October 1957 letter to a friend who had recommended he read Ayn Rand’s The Fountainhead, Hunter S. Thompson wrote, “Although I don’t feel that it’s at all necessary to tell you how I feel about the principle of individuality, I know that I’m going to have to spend the rest of my life expressing it one way or another, and I think that I’ll accomplish more by expressing it on the keys of a typewriter than by letting it express itself in sudden outbursts of frustrated violence. . . .”

That was so Thompson.

That article is an excellent story of a 12-hour interview with the ‘Outlaw Rebel of Journalism,’ who wrote his butt off constantly and changed the arc of storytelling, news, and politics.

Sort of how Trump changed the arc of politics, elections, civil service, campaign rallies, and on and on. There is so much to write about.

Writers find exciting things to write about in any story.

Listen to what Paris Review said about Thompson- the prolific writer:

“The most striking thing about Thompson’s house is that it isn’t the weirdness one notices first: it’s the words. They’re everywhere—handwritten in his elegant lettering, mostly in fading red Sharpie on the blizzard of bits of paper festooning every wall and surface: stuck to the sleek black leather refrigerator, taped to the giant TV, tacked up on the lampshades; inscribed by others on framed photos with lines like, “For Hunter, who saw not only fear and loathing but hope and joy in ’72—George McGovern”; typed in IBM Selectric on reams of originals and copies in fat manila folders that slide in piles off every counter and tabletop; and noted in many hands and inks across the endless flurry of pages.”

What politics? To see Thompson’s legacy get reduced to what was recently published about Trump in the RollingStone is a disgrace of historic proportions.

Thompson said he was never into writing about politics to hurt anyone.  No Democrat-paid political writer can say the same.

For RollingStone to be clutching their pearls at the idea of a genius like Trump posting on his own social media- after being censored from other places- is nothing more than paid political propaganda.

What journalist would come up with the narrative that Trump is the bad guy in that story? Public watchdogs they are not.

Love him or hate him, what Trump did in 2015 and 2016 was historic, so his ideas and writings are historic-only someone masquerading as a ‘journalist’ would not want him to write his ideas out more, so they could submerge themselves in the action and write a story that people would want to read.

Look at the RollingStone writer’s idea of the art of reporting while adding her fantasies to the facts. What is she writing about- ask yourself if she has ever been to a Trump rally- or talked to a Trump supporter?

“Trump has thrown red meat at QAnon believers of his base in the past. The signs and slogans of the conspiracy are not an uncommon sight at Trump rallies and events. The former president refused on multiple occasions to denounce QAnon, which has been deemed a potential terror threat. As recently as earlier this month, Trump posted a video of himself to Truth Social that featured a song affiliated with QAnon,” Nikki McCann Ramirez wrote in her article, Trump Woke Up and Went on a 60-Post, QAnon-Fueled Social Media Spree, for The Rollingstone.

What music?  Is this poetic- or just nasty?

“You can take the man off of Twitter, but you can’t take the urge to post out of the man,” Ramirez said in a catty fashion. Does anyone else hear- meow!

A poet she is not. More like a participant with a bunch of old grannies sitting around the stitch and bitch and obsessing on the most historically popular president of their lifetimes. And to shame him for writing out his thoughts…. a journalist wrote that- that is so crazy!

Do you see it? Did you wonder about her true motivation in using a historic platform to deconstruct Trump’s social media statements? Was it Music, politics, and culture?

Is it to sell clicks to Democrat malcontents? Really- what is the purpose of this article? Who is paying for this garbage?

Did her editor tell her to write a slam piece on Trump and MAGA and invoke Qanon? Because that is this week’s narrative- Wow, so creative. Thompson would call the storyline garbage. And to smear over half the country is gross.

Oh and Trump wrote out too many thoughts.. how many social media posts would her Rolling Stone article fill? Then remember one of those people was elected President.

Remember the corporate media are not just attacking Trump, Ramirez, in her piece, attacked the over 72 Million plus – American supporters of Trump because Democrats don’t want you to vote for him when he runs again.

Name any other purpose for this:

In the face of a DOJ probe over his post-presidency handling of classified documents, Trump has sought reassurance from his most loyal followers, including accounts like “Patriotic American Alpha Sauce” and “ULTRA-MAGA 4LIFE” who post memes lauding the former president.

Among his Tuesday morning posting spree, Trump “re-truthed” the text of a message from Q, the conspiracy deity claiming to be a high-ranking government official with “Q” level security clearance, and whose adherents believe Trump will save America from a cabal of Satan-worshiping pedophiles.”

Of course.. it is all a conspiracy.. a Qanon conspiracy. Of course. That is music, politics, and culture of the elite right there…

Hunter S. Thompson once said-‘The Edge… There is no honest way to explain it because the only people who really know where it is are the ones who have gone over.”

RollingStone, you have gone over the Edge of real journalism and reporting and into the dustbin of history.  Now you are just corporate media pimping out some conspiracies for some clicks to help the corrupt Democrat Party- and it is absolutely sickening.

You really are no Hunter S. Thompson.