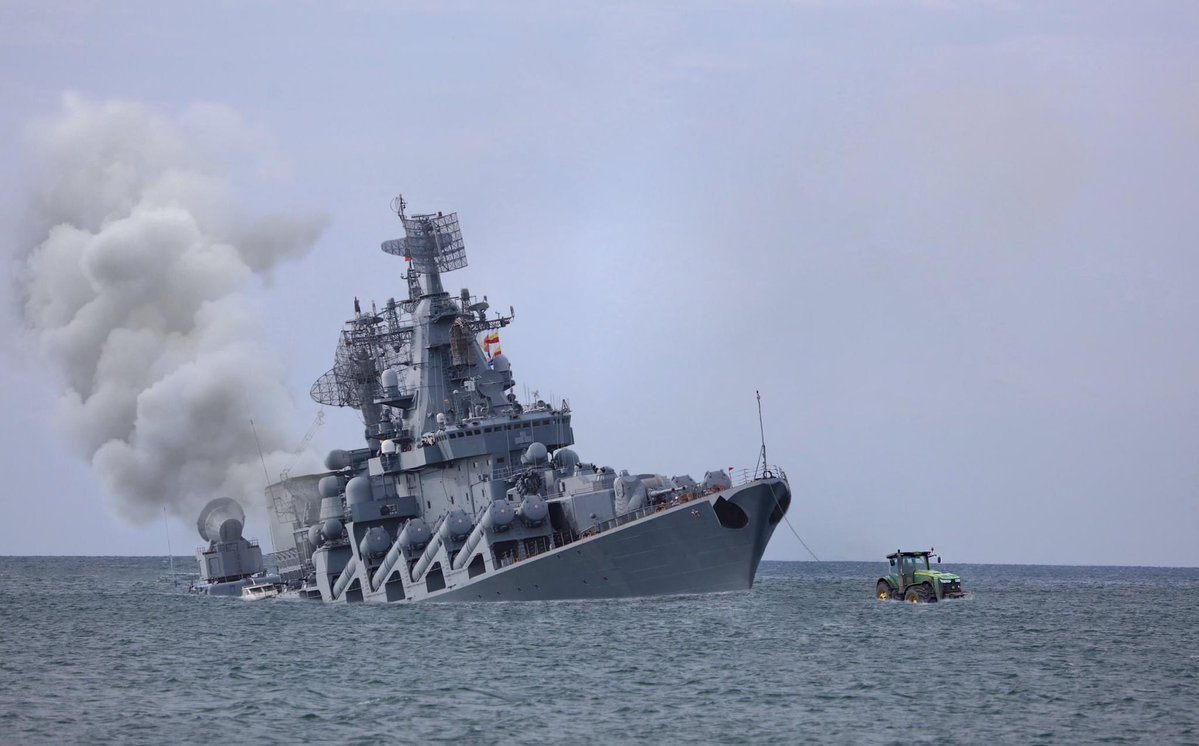 The Russian guided-missile cruiser Moskva rests deep beneath the Black Sea. With so many players trying to slant the information about it- it is not perfectly clear what role Americans play in this saga.

The Russians appear to be putting out a cover story about the demise of their Navy Jewel being due to a “fire”, however, based on analysis- compared to when Ukraine said they hit the vessel with an Anti-Ship Missle- the Russian story is questionable.

It is still not clear what role the United States plays in this war between the two countries.

A Key Note for Americans is about this story: What is important to understand is that 40 years American Naval experts have wondered about that very ship- as legit opposition- the ship is history.   And Ukraine was well prepared for them.

The Moskva has enjoyed a public relations campaign – within the United States- that gave the Russian military notable fame of fear and awe- when in the end it was sunk with their own missiles- by a much less respected Naval power.

While none of this has anything to do with what is good for the United States- it is important to see how the American media and Pentagon are the middle of it for some reason. Check out the conflicting news:

“BREAKING: Russia’s Black Sea Fleet flagship vessel, Moskva, has sunk after losing its stability when it was towed to a port, the Russian Defense Ministry announced,” ABC News reported.

“We can confirm the Russian ship Moskva was struck by two Ukrainian Neptune missiles,” a senior defense official said.

The BBC is reporting Saturday morning that the reason for the shocking sinking of the Russian Naval ship is unclear.

“Ukraine claims that it hit Moskva with missiles, causing it to sink. Russia has insisted the reason for the sinking was a fire. On Friday, the United States supported Ukraine’s account, with a senior defense official saying that it believes that two Ukrainian Neptune missiles hit the Russian warship in the Black Sea.
Whether the ship lies at the bottom of the sea as the victim of Ukrainian missiles, Russian incompetence, bad luck or a combination of all three remains disputed. What is certain, though, is that the biggest wartime loss of a naval ship in 40 years will raise troubling questions not only for Moscow, but for military planners around the world.”

The news on liveuamap, on Thursday, was a bit confusing at times about the fate of the Russian, reports of the severity of the damage came in slowly. Getting news from the area, from either side, can be like trusting the American lapdog media for details.

Thursday afternoon we heard: “Russian Ministry of Defense says fire at cruiser Moskva has been contained, explosions ceased, crew evacuated and the vessel is being tugged to the port”

By early Friday morning, the US Pentagon was reporting: “The sinking of the ship “Moskva” is “a hard blow” for the Russian fleet.”

The news was confirmed by the Russian Defense Ministry said that the missile cruiser “Moskva” sank in the Black Sea while being towed to port by Friday morning, but wouldn’t say what happened.

On Facebook was footage of a sinking ship, set to the music of the Titanic, proving that the Russian identity of the ship’s strength was being destroyed.

The Free Press Journal reported the severity of the situation, that the sinking of the ship was that Russians were calling this attack- the beginning of “World War Three” by early Friday afternoon:

“Moscow warned Friday it would step up missile attacks on Kyiv in response to what it said were sorties across the border, the day after its Black Sea naval flagship sank.

Olga Skabeyeva, one of Putin’s top media figures in the tightly controlled state-run Russian media, bizarrely claimed that the war in Ukraine had escalated into a war against Nato.

“What it’s escalated into can safely be called World War Three. That’s entirely for sure. Now we are definitely fighting against NATO infrastructure, if not NATO itself. We need to recognise that,” she said in the broadcast here that was also widely shared on the social media platform Twitter.”

“Another anchor Olesya Loseva, the host of Vremya Pokazhet, reportedly told viewers that the West was now supplying ‘zillions of weapons’ to Ukraine.

Satellite images, from Naval Times, show pride of Putin’s Black Sea Fleet while vessels are scrambled to rescue those onboard.

The Soviet-era Moskva warship is seen burning in the Black Sea in radar before sinking on April 13.

Gregory Hines reported on some essential details to know:

The sinking of the Russian Black Sea Fleet flagship Moskva” (Moscow) is a major development which has shocked Naval experts.
The 611 foot cruiser was the third largest vessel in Russia’s fleet and one of its most heavily defended assets. 8 key points from the BBC World Service:
1) “Moskva” had an advanced radar system crucial for anti-air support for the entire Black Sea fleet.
2) Russia has only three tier 1 naval vessels, and now there are none in the Black Sea. It’s a disaster for them.
3) Turkey will not let new Russian vessels enter the Black Sea, so it’s not possible to replace the Moskva.
4) The flagship had an elite crew of over 500 sailors and only 54 appear to have been rescued.
5) There is also a morale and public impact. A large ship named Moscow has sunk.
For a similar public relations reason, the Nazis changed the name of the heavy cruiser “Deutschland” to “Lützow” in 1940.
6) The sinking is a real surprise because Moskva was equipped with a triple-tiered air defense system.
That should have given it three opportunities to defend itself from the Neptune missile attack.
The Moskva system can fire 5,000 rounds in a minute, essentially creating a wall of flak around the cruiser. Why the Ukrainian missiles got through is a real mystery.
7) This is the biggest Russian/Soviet navy setback since the loss of “Marat” in 1941.
8 ) The missile strike raises serious questions about the effectiveness of the modernization of Russia’s entire fleet.
At the same time, this escalation is unfolding between Russia and Ukraine- America does have its own Naval dramas to worry about, as pointed out in a recent Business Insider report:

The development of increasingly sophisticated anti-ship weapons by capable adversaries, namely Russia and China, has raised doubts about those ships.

The captains of two of those carriers discounted the concern, saying the US Navy’s 11 flattops would be tough to find and hard to stop.

Questions about whether carriers are “obsolete” had come up before, including when Congress debated whether to build the USS Enterprise, the Navy’s first nuclear-powered aircraft carrier, Capt in the late 1950s. Paul Campagna, the commanding officer of the USS Dwight D. Eisenhower, said.

So how much do Americans need to worry about Russia and escalations by China- this is something Americans need to worry about.  While it is not clear why America needs to be involved with foreign wars at all, the fact is that we are dragged into them often- by a government we do not fully trust.
Despite all of the propaganda about supporting Ukraine- many Americans wonder if our involvement there is about protecting the criminal involvement of our own government players in influence peddling and corny business deals over energy.
The boogeyman of the sea- the Russian “super naval vessel” is down in Davey Jones locker- but why are we involved at all?
That part of the story is still developing.