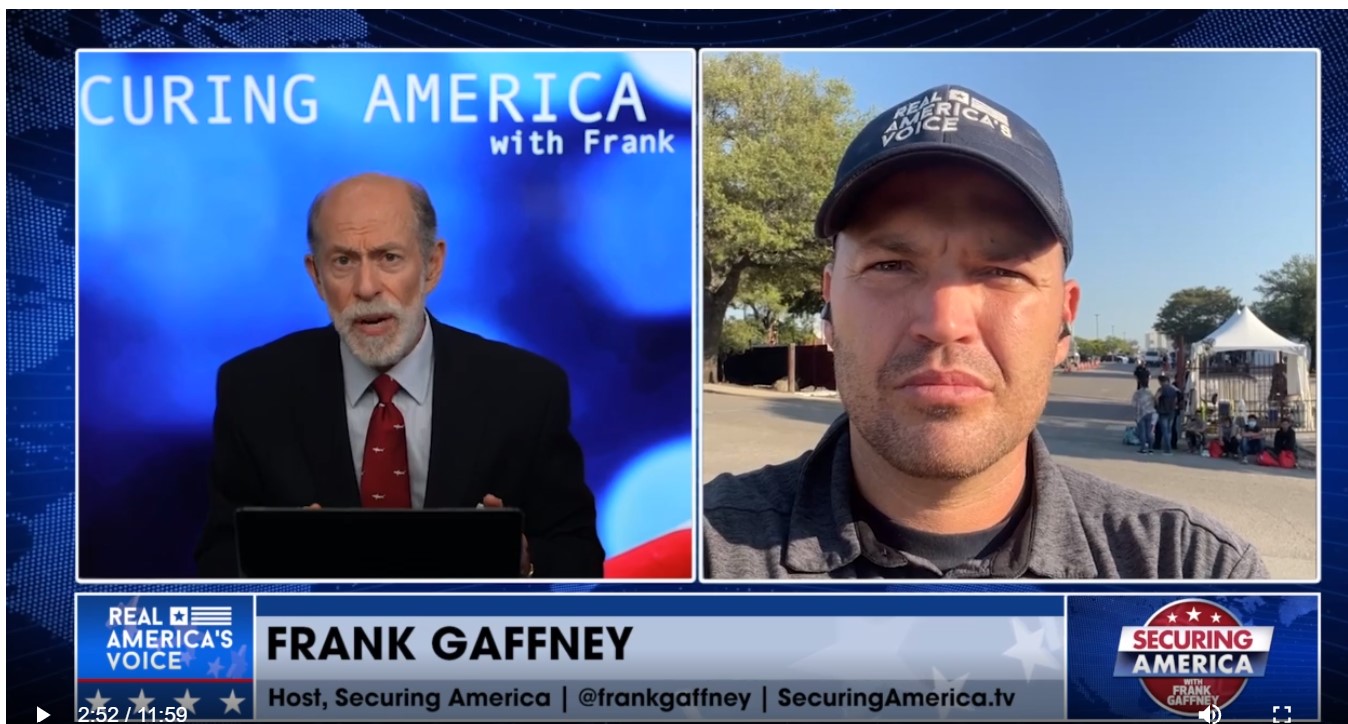 Ben Bergquam appeared on Real America’s Voice with Frank Gaffney recently to talk about Bergquam’s extensive understanding of the disaster that is unfolding on the US Southern border. Together they uncovered a pattern that showed a potential for military action against the United States and the American people- if they are assessing the threats that we face accurately.

Bergquam is an expert at understanding how the left runs their Non-Government Organizations, (NGOs) that are facilitating the invasion which is causing so much misery.

Gaffney, who is an expert at detecting the massive threat from the Chinese Community party and other threats to national security.

Gaffney brought up the likelihood of a Weapon of Mass Destructing being smuggled into the US through the wide open border. Berquam’s response was chilling.

“Please check out my interview with Frank Gaffney of “Securing America” from San Antonio, Texas where shelters are overflowing with illegals that have been brought in by Joe Biden and the left. Coming to a city near you!” Bergquam tweeted along with the footage of the interview.

Here are some of the highlights of the discussion.

“Ben Bergguam is an investigative reporter and Frontline journalist for real America’s Voice network and he is relentlessly covering the unfolding disaster at what we have called the US border with Mexico,” Gaffney said, then introducing an interview Ben did with Sheriff Boyd of Texas.

Boyd was is Right. Obviously, he knows it more than most folks, but right now, the cartels have operational control in Mexico; they’ve had it for years. Now that it’s basically, Mexico has become a narco-state, and it really has been that way for years. The sad reality is America is in large part, in some places, being controlled by the cartels now,and in some locations on the border.

You see it where we’ve lost total operational control. We’re actually here in San Antonio right now at one of the leftist NGO shelters that’s operated through the city by the leftist mayor as well as a bunch of so-called humanitarian organizations.

But really, all it’s doing is Is aiding and abetting that human trafficking that the cartels making billions of dollars off of as they’re doing drug trafficking as well. So it is we don’t have a secure border and large respect, we no longer have a border because of what Joe Biden and secretary Myorkis have done- in addition to the human trafficking. ,” Bergquam said

“Of course, as you’ve been documenting, we’re seeing drugs being brought across as well, including unbelievably deadly fentanyl, which was killing between In 70 and 100 thousand US Citizens, every year we also have the possibility that there could be weapons of mass destruction,” Gaffney said.

“Well, clearly, it’s an extreme threat. We’ve already captured 66 people off of the Terror Watchlist this year and those are the ones that we caught. How many did we not catch?

Plus a weapon of mass destruction that you mentioned that is, we’ve had more people killed by fentanyl last year than in all of our Wars combined in America in the last hundred years.

It’s just it is a weapon of mass destruction, and it’s directly from the cartels. Well, chemical warfare. That’s absolutely how, I would think of it, and they’re getting a lot of help from the Chinese government, absolutely and getting that into our country and killing us with it.