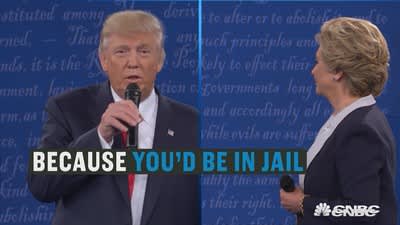 An explosive report from John Durham, a Special Counsel for the United States Department of Justice, over the weekend- exposed the truth about the massive spying schemes by Hillary R. Clinton and that triggered Clinton to be top trending news on social media on Sunday.

The same report that exposed a familiar name to election watchers- one of the top masterminds of the 2020 ‘Big Steal’, attorney Marc Elias.

Links to stories and comments about Clinton’s deceitful actions against President Donald J. Trump were accompanied by the hashtags of ‘Lock Her up,’ ‘Trump Was Right,’ “Hillary’s Treason” and ’60 Minutes’.

One hashtag that was getting the most notice was a 2020 60 minutes video that showed Trump talking to radical far-left 60 minutes host Lesley Stahl.

In the video, Stahl was being hostile and argumentative with Trump over his truthful claims that he and his campaign were spied upon by Clinton and others, which is what the Durham report just proved:

Journalist Kyle Becker of Becker News was one of many people to repost the old footage- and then Becker went even further and slammed the ‘news” show for being long-time Democrat propaganda.

When has “60 Minutes” ever stopped a Democrat such as Hillary Clinton from making an accusation because the network ‘couldn’t prove it’?

“Did they censor Trump’s interview because they couldn’t ‘prove it’ or because *they knew* he was right? @60Minutes,” Becker posted.

Becker slammed Stahl for using 60 mins platform for her political agenda and called her a fraud, recalling when Stahl held back the whole interview so that the public would not see the disastrous exchange. Becker reminded people that Trump himself released the full interview on his own platform.

The Wahington Examiner, at the time, reported on the controversy about Trump’s claims and Stahl’s attempt to cover them up on behalf of the Democrats.

“President Trump has released his full interview with 60 Minutes correspondent Lesley Stahl, which showed the two jousting over what material ought to be aired.

The president released his full, 35-minute-plus interview with Stahl on social media on Thursday. The two battled over Trump’s stance on masks, rising coronavirus cases, his campaign rallies, and the way Stahl conducted the interview. Stahl warned the president at the start of the interview, asking if he was “ready for sometough questions.”

“Of course there is. It’s all over the place. Lesley, they spied on my campaign, and they got caught,” Trump continued. Stahl told the president she couldn’t air the segment of the interview because they couldn’t verify Trump’s claim. “Can I say something? You know, this is 60 Minutes. And we can’t put on things we can’t verify,” she said.

And Durham’s report is not complete vindication that the Democrats and their leftist media allies have been serving something and someone very different than the interests of the American people.

WHAT WE CAN NOW VERIFY

According to the Durham report:

The filing “definitively showed the Hillary Clinton campaign directly funded and ordered its lawyers at Perkins Coie to orchestrate a criminal enterprise to fabricate a connection between President Trump and Russia.”
Bad news for #MarcElias.

Which leads directly to questions about Marc Elias’ activity during the 2020 Presidential election, which continues on to this day in numerous redistricting schemes.

This story will be developing for a long time.