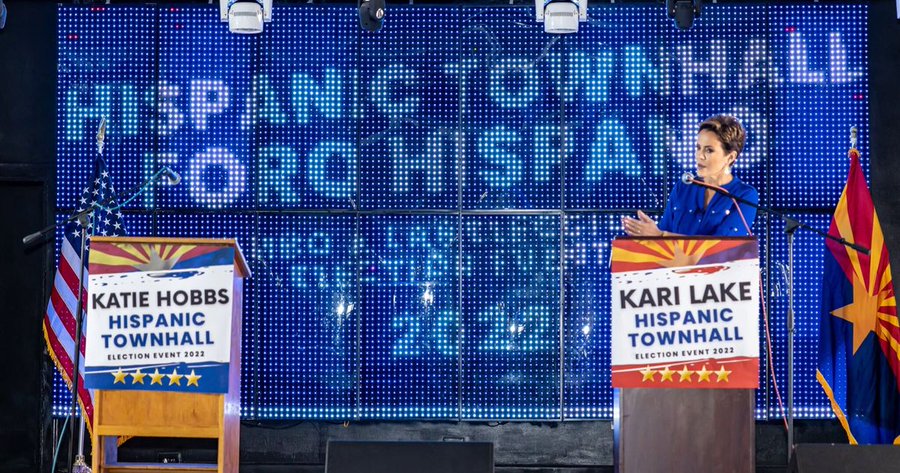 Kari Lake is running for Governor of Arizona as a Republican who wants to secure the border and declare that the Southern border of her state is under an official invasion, and she is securing the Hispanic vote everywhere she goes- including town halls packed with Democrats.

On Thursday, activists and voters in Phoenix took to Twitter in Outrage that the Democrat Gov. candidate blew the event off. Katie Hobbs didn’t even bother to attend.

“Dear Katie Hobbs, You chose not to address the Hispanic community in person. I don’t care how much you tweet – if you won’t debate – or attend a TownHall forum with your opponent- you can’t be trusted,” Karen Trollhunter wrote in response to the update that Hobbs was a no-show.

“So@katiehobbs is a no show at the first ever Hispanic townhall here on Thomas and 43rd Ave in Phoenix. Heavy Hispanic area. I met lots of Democrats that will be voting for@KariLake Katie Hobbs doesn’t care for the a Hispanic vote #LatinosLoveKariLake#katiehobbsisaracist”

“I was interviewed by Telemundo and I told them that I wanted to see if Katie Hobbs was going to show up, and there were a lot of Democrats here and they are voting for Kari Lake. Katie Hobbs can run Arizona,” the woman said on her video, watch:

Kari Lake took the opportunity to slam Hobbs for her rudeness.