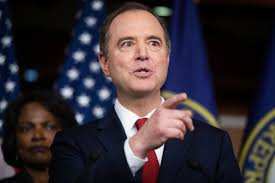 The Durham investigation may be about ready to expose the people who were involved from the very beginning of the Russiagate hoax- and one of those people may be ‘shifty” Adam Schiff.

According to newly emerged details from the ongoing Durham investigation, both Adam Schiff and Dianne Feinstein were named recipients of Fusion GPS emails dating back to 2016, which puts both of these actors at the center of a massive scandal is about to explode into the public conscious.

According to the Government’s reply to the defendant’s and non-party intervenors filing concerning the government’s motion to compel the production of purported privileged communication for in camera inspection:

“The United States of America, by and through its attorney, Special Counsel John H.Durham, respectfully provides herein its reply to the oppositions and other filings made by the defendant, Michael Sussmann (the “defendant”), Perkins Coie LLP (“Perkins Coie”), Hillary for America, Inc. (“HFA”), the Democratic National Committee (“DNC”), Fusion GPS, and the individual referred to in the Indictment and herein as “Tech Executive-1.”

As set forth in further detail below, none of the arguments or facts contained in these parties’ filings and accompanying affidavits undermine the Government’s limited request that the Court review 38 relevant documents to determine if they are being properly withheld from the Government’s trial evidence based on the attorney-client privilege and attorney work product protections.

Indeed the purported privilege holders who have intervened do so in a case in which the defendant is alleged to have denied representing any client when he brought the Russian Bank-1 allegations to the FBI.

And these parties are advancing a highly novel, and seemingly broad, theory of attorney-client privilege, namely, that Fusion GPS’s political opposition research – which triggered a sizeable outflow of unverified derogatory information into the media, the government, and the public – was, in reality, confidential expert work intended to support legal advice regarding libel and defamation.
Hold on.. wait a min.. who is a “privilege holder”?

So then knowing that radical Never Trumper, US House Rep. Adam Schiff (D-CA) was a subscriber of Fusion GPS information is very interesting.  And radical far-leftist US Senator Dianne Feinstein (D-CA), who was caught with a Chinese Spay in her employment- being a recipient of GPS data would be noteworthy as well.

What might they have been doing by talking to Fusion GPS way back then?

The Sussmann’s trial is scheduled to begin in May and should bring the following information out to the public.  The fact that the Fusion emails are already under scrutiny by the courts should be worrisome because the public is already aware of Schiff’s involvement.

What we know so far:

Hey ⁦⁦@AdamSchiff⁩ – why does Fusion GPS seem to think you have information on Carter Page in July 2016?

How many communications did you exchange with Fusion GPS personnel during 2016-17? pic.twitter.com/tCDtHXcHUS

The public is aware based on reports by Red State, Techno Fog and Gateway Pundit:

As Techno-Fog reports: Durham, in his report showed that he has hundreds of e-mails between Fusion GPS and reporters, including efforts to frame former Trump advisor Carter Page.

Special Counsel John Durham just filed this motion in response to the efforts of Hillary for America, Fusion GPS, et al. to keep secret (by use of the attorney-client and work product privileges) communications involving Fusion GPS.

Durham states the “purported privilege holders who have intervened do so in a case in which the defendant has denied representing any client when he brought the Russian Bank-1 allegations to the FBI.” The privilege controversy thus entraps Sussmann to a certain extent, seemingly precluding his denial that he was working on behalf of a client. Brilliant.

Additionally, Durham casts doubt on the declaration of Marc Elias that Fusion GPS was retained to provide “legal advice.” Here he makes a key point:

”if rendering such advice was truly the intended purpose of Fusion GPS’s retention, one would also expect the investigative firm to seek permission and/or guidance from [Hillary for America] or its counsel before sharing such derogatory materials with the media or otherwise placing them into the public domain.”

In support of that point, Durham states he is in possession of “hundreds of emails in which Fusion GPS employees shared raw, unverified, and uncorroborated information – including their own draft research and work product – with reporters.” (He even filed them under seal with the court.) These include:

Also – they have DARPA Contracts and Classified data

A number of emails have been released in Durham’s latest. One email showed that pencil-neck Adam Schiff was involved in the Russia collusion lie as early as July 2016.

Durham has now come out with evidence that Adam Schiff was very deep into the fake Russia Hoax. He is as involved as Hillary.

And they appear to have done so as part of a (largely successful) effort to trigger negative news stories about one the Presidential candidates.

So the information is out there.  Watch and see what the Government does to suppress this story from hitting the mainstream of America.