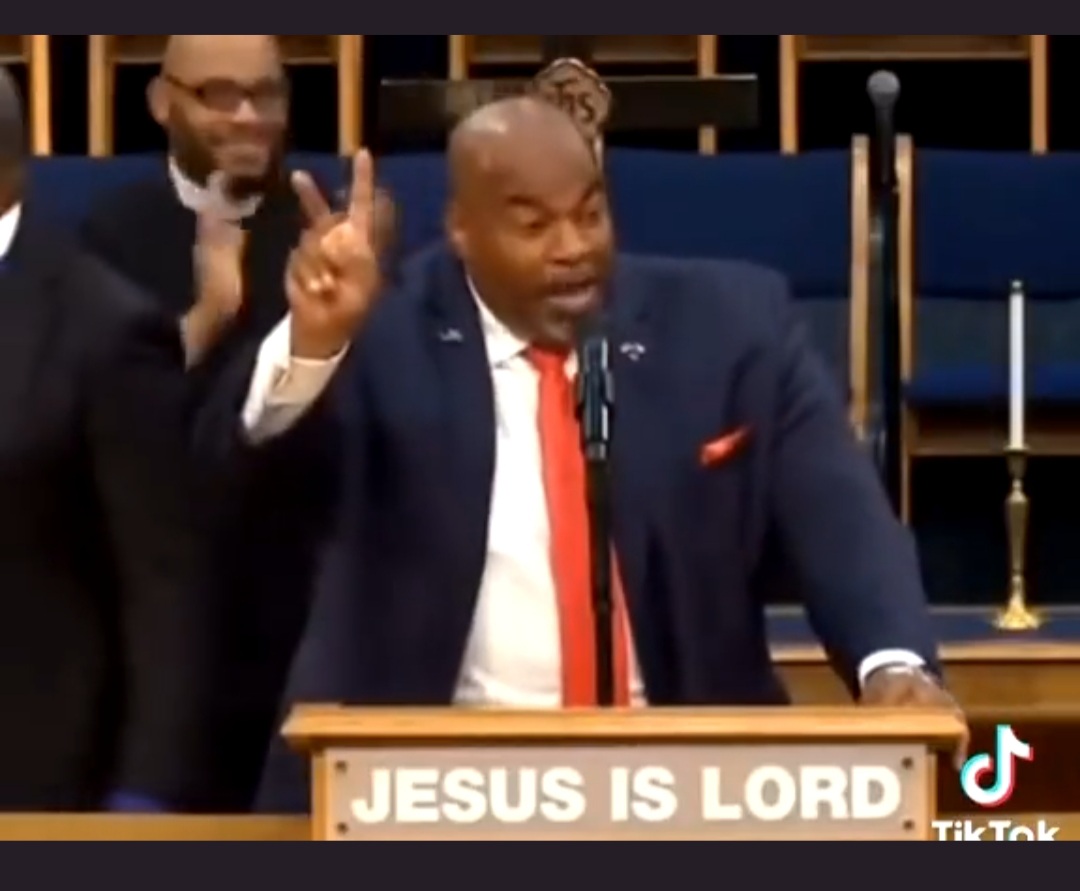 Republican Lt. Governor  Mark Robinson rapidly went viral on Sunday as a video of him, from at Tik Tok video made it to mainstream viewers. The video is from August 2021 and was published on local NC news on Oct 12, 2021.

“This transgenderism has no place in schools. They are dragging our kids into the pit of Hell telling them that mess. We need to get back to teaching them how to read, instead of teaching them how to go to Hell,” Robinson is heard saying from a pulpit surrounded by flowers, with a sign below him says “Jesus is Lord”.

Robinson, who has been embattled with the Marxist left since his comments about the second amendment went viral from a Greensboro town hall in 2017, was recorded in 2021 (and sent viral again this week) at The Upper Room Christian Church in Raleigh North Carolina  showing him talking about his point of view,  that “people- esp Christians need to stand up and be brave and tell the truth, there are two genders!”

In the video, Robinson takes direct aim at local-leftist lapdog MSM media- WRAL who have led the charge against Robinson attempting to frame his words with a false narrative, while the media group attempt to rise up rebelliousness against the state’s first Black Lt. Gov- one who happens to be a Republican- with a tendency for firing back on the Marxist left.

Robinson has never hidden himself or his values away.  He and his wife Yolanda have always both been determined Christian leaders and conservatives. They are both unashamed.

Perhaps they are a little too Conservative for the comfort of North Carolina’s RINOS- as both Robinsons have faced character assassination, from left and sometimes right. Yet- they let nothing deter them, they do not backtrack- you get no word salad from either of them.

As unpolished as they are to the political consultant, they are adored by the people of the state, for being just the firebrands they are- with the Lt. Governor right out in front and on camera.

Robinson won the designation in 2020- as the highest-ranking Republican in the state on his first try at running for office and he has always been authentic and open about his agenda against the Marxist left.

The Upper Room Chrisitan ministry has- also- not been shy to promote its Conservative values.  The Christian organization has been involved in their community for years, promoting America First agenda that will benefit their congregation.  The group has welcomed Republicans into their flock to speak from the pulpit on other occasions, and as seen in the video, they are no stranger to Robinson- who has them on their feet in support of exactly what Robinson is heard saying.

Robinson has been criticized for his beliefs and his agenda- even from the White House for his remarks about Trandgenderism. But he just keeps on talking.

The Fayetteville observer reported about that in 2021:

North Carolina Lieutenant Governor Mark Robinson has doubled down after his comments calling transgenderism and homosexuality “filth” drew widespread rebukes and calls for him to resign.

Robinson, a Republican, made the controversial comments in June at the Asbury Baptist Church in Seagrove, North Carolina. “There’s no reason anybody anywhere in America should be telling any child about transgenderism, homosexuality, any of that filth,” he told the audience. “And yes, I called it filth. And if you don’t like it that I called it filth, come see me and I’ll explain it to you.”

As Lieutenant Governor, Robinson holds the second-highest office in the state, and he would take over if Gov. Roy Cooper is ever unable to perform his duties.

His words went viral last week after the group “Right Wing Watch” tweeted a clip of his speech. In recent days, scores of advocacy groups and politicians — from Raleigh to the White House — have denounced what Robinson said.

“These words are repugnant and offensive,” said White House deputy press secretary Andrew Bates in an Oct. 8 statement. “The role of a leader is to bring people together and stand up for the dignity and rights of everyone; not to spread hate and undermine their own office.”

In a tweet calling on Robinson to resign, state senator and 2022 U.S. Senate hopeful Jeff Jackson (D-Mecklenburg), wrote: “There’s no debate here. This is open discrimination. It is completely unacceptable.”

And yet- Robinson persisted.

And Republicans, Democrats and Independents got on their feet and applauded him for it- Again.

I did reach out to the Robinsons and asked if they would like to add anything to this article, and they responded, “no”.  It speaks for itself.  I did get a smiley face .

Unapologetic is what we expect from our Lt. Governor, his lovely wife, and their supporters.