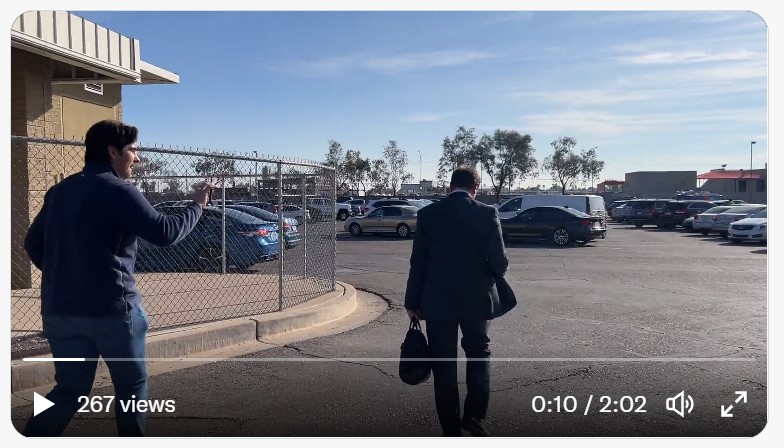 The corporate media is choosing to mock the Kari Lake lawsuit and the 2 day hearing that is exposing some very serious questions over possible election corruption that could go as far back as the 2020 election, but independent investigative reporter Ben Bergquam, of Real America’s Voice, has been on the scene for months, first interviewing Lake, then following her on the campaign trail and now bringing Americans the information they really want to have about what is going in Arizona courtroom as they discover what happened in AZ’s November elections.

On Thursday, Bergqma was with Gateway Pundit reporter, Jordan Conradson who was filming himself questioning an election official who had testified earlier in the day in the Lake hearing.

Bergquam was on the frontlines filming COnradson- filming the official as he split from the hearing today- running away from the two reporters who were asking him questions:

Heard here is Gateway Pundit reporter Conradson, who is questioning AZ official Scott Jarrett as Jarrett walks very briskly to his car to avoid talking to the press.

On Thursday, day two of the court hearing, there was more explosive testimony from experts indicating that something went very, very wrong in Maricopa county and that likely the mistakes were intentional and meant to prevent Lake from winning the governorship.

Ben Bergquam had a front-row seat to the court action:

“More powerful testimony in the @KariLake trial against Arizona election fraud from Rich Baris,” Bergquam posted on twitter with the highlights:

Baris testified that according to his work, Kari Lake would have won if there hadn’t been problems with the machines.

And Here is Jarrett’s earlier testimony.