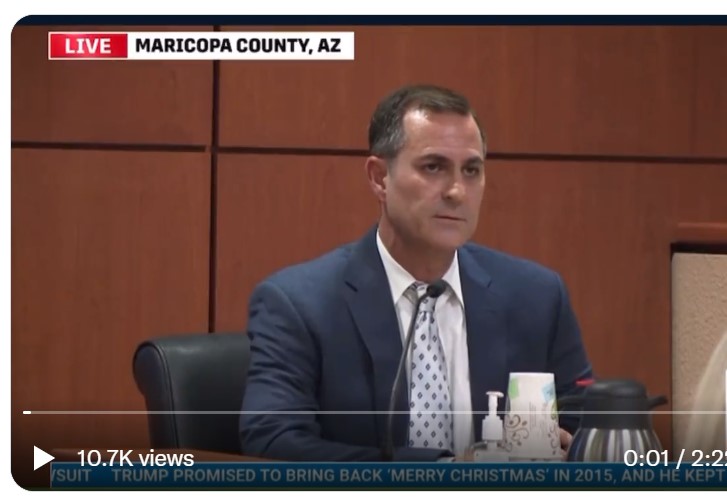 Mark Sonnenklar, a Lawyer with 26 years of experience, testified under oath on Wednesday in Kari Lake’s lawsuit against election officials, and he told the judge that about 52% of vote centers were a disaster in Maricopa County; he describes the disaster as “pandemonium” on Election Day, which he recorded in his work as a roving attorney on Election Day in Maricopa CO, AZ.

“I would say that there is only 17,000 votes separating the two candidates for Governor, and based on what I saw on Election Day, I would say there’s no question in my mind that- if there had not been tabulator issues at both 132 centers. This election would have resulted in a win for Kari Lake,” Sonnenklar said in court on Wednesday.

As many vote centers in Maricopa County experienced issues with election equipment on Election Day 2022, many ballots were rejected by tabulators and spoiled, but not always properly, according to a report filed with the Arizona attorney general’s office.

Of the 115 vote centers, 72 (or 62.61%) “had material problems with the tabulators not being able to tabulate ballots, causing voters to either deposit their ballots into box 3, spoil their ballots and re-vote, or get frustrated and leave the vote center without voting,” Sonnenklar reported.

“The strong consensus regarding why the tabulators would not read certain ballots was that those ballots, in particular the bar codes on the side of the paper, were not printing dark enough for the tabulators to read them,” Sonnenklar wrote.

At one vote center, Sonnenklar “witnessed several voters spoil two ballots” when the tabulators wouldn’t scan them. The time it took voters to spoil ballots, get new ballots, and vote again was in addition to the 1-2 hours many of them had to wait in line to get their initial ballot, he reported.

The inspector at another vote center that Sonnenklar visited “had a messy pile of spoiled ballots next to her chair, many of which had not been marked ‘Spoiled,’” he recounted, adding that she periodically “left those unspoiled ballots unattended while she was working in other areas of the vote center.”

Sonnenklar noted that before leaving the vote center, he asked her “if she was going to spoil all of the ballots in her pile.” She “got defensive,” he reported, and said that “she hasn’t spoiled the ballots yet only because she keeps getting pulled away by her staff.”

Another vote center Sonnenklar visited had 115 spoiled ballots and 116 misread ballots dropped into Box 3, to be counted later.

Another RNC roving attorney, Roie Bar, reported witnessing “voters spoil about 4-5 ballots before the machines either accepted them, or they otherwise gave up and placed it in the ‘hope it gets counted later box,’ as one voter put it.”

Attorney Kevin Beckwith reported that a poll watcher at one vote center “saw the inspector carry about 50 spoiled ballots around under her arm until she had to get a bag for them and then they disappeared someplace.”

Phill Kline, Director of The Amistad Project, told Just the News on Tuesday that the irregularities in Maricopa County on Election Day raise concerns about election management and results in close elections.

He explained that certain intransigent election officials “refuse to acknowledge any issues” because the belief is that, in doing so, they are admitting that there are enough irregularities to overturn the results. But the issue, Kline said, is that elections are run properly.

“Obviously, not managing spoiled ballots properly under the law calls into question the management of the election,” Kline said. The “unwillingness” to reveal and address issues in elections “allows problems to accumulate so people don’t have faith in the results.”