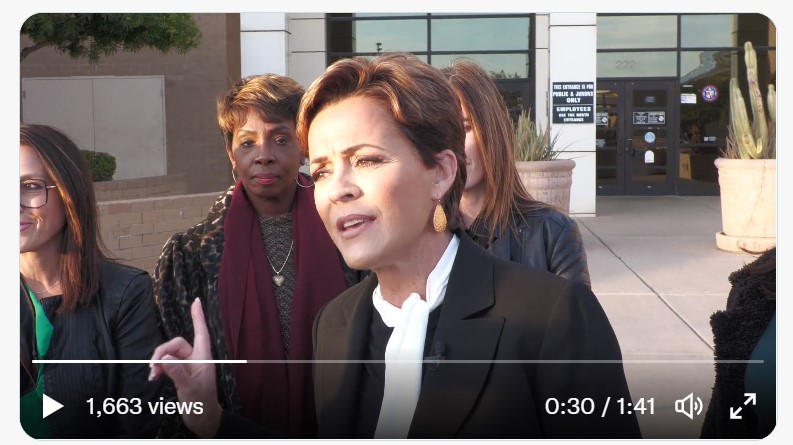 The corporate and mainstream media is eager to discredit Kari Lake and her lawsuit against Katie Hobbs and other election officials in AZ over a disastrous November election.

Here is how AZ MSM, AZ Central– who hate Lake, is covering the 2 day trial:

Kari Lake’s two-day election challenge ended Thursday without any evidence presented that election problems were engineered by Maricopa County officials and her opponent.

Maricopa County Superior Court Judge Peter Thompson, who oversaw the short trial, said after closing arguments by attorneys he would soon render his opinion but that it would not be before “five o’clock.” Legally, he has five days to decide whether Lake proved her case.

The Republican candidate for governor is fighting to prove the Nov. 8 election was rigged against her, causing a loss by more than 17,000 votes to Democrat and Secretary of State Katie Hobbs. After the election, Lake filed a lawsuit challenging the results and highlighting Election Day problems that frustrated voters at some polling locations.

Long lines were one result after vote-counting machines called tabulators failed to read several thousand ballots; officials blamed the printers that print out the ballots.

Thompson tossed out eight of her 10 allegations but allowed the evidence trial to proceed on the remaining two. Lake had a high bar to clear from the outset: Thompson said she must show that the printer malfunctions were intentionally rigged to affect the election results, and that the actions “did actually affect the outcome.”

The second day of hearings was dominated by testimony by Rich Baris, a conservative writer and pollster called to the stand by Lake’s legal team to discuss Baris’ theory that his polling data shows Lake would have won but for the polling-site issues.”

That sounds a lot different from how Lake, herself, reports the day went:

“Kari Lake optimistic as she leaves the courthouse after two days of trial against Arizona elections… Calls the defense witnesses activists! Pray the judge has the courage to make the right decision!” Bergquam reported on Twitter:

Here is more of the statement:

Western Journal reported on the second day of the hearing:

Baris told the court that his firm Big Data Poll conducted exit polling in the Nov. 8 election and found a surprising 20 percent disparity in the response rates of those who used a mail-in ballot versus those who voted on Election Day.

The polling firm director explained that everyone who participated in the survey had agreed before voting to do so.

“The bottom line here is that those who said they would cast their vote by mail or drop their ballot off by mail completed their questionnaire at a 93 percent rate,” Baris said. He explained that some drop-off in participation was to be expected, so 7 percent not completing the survey was not surprising.

“The rate for Election Day voters was only 72 percent,” Baris said. “I can tell you that has never happened to me before, ever.”