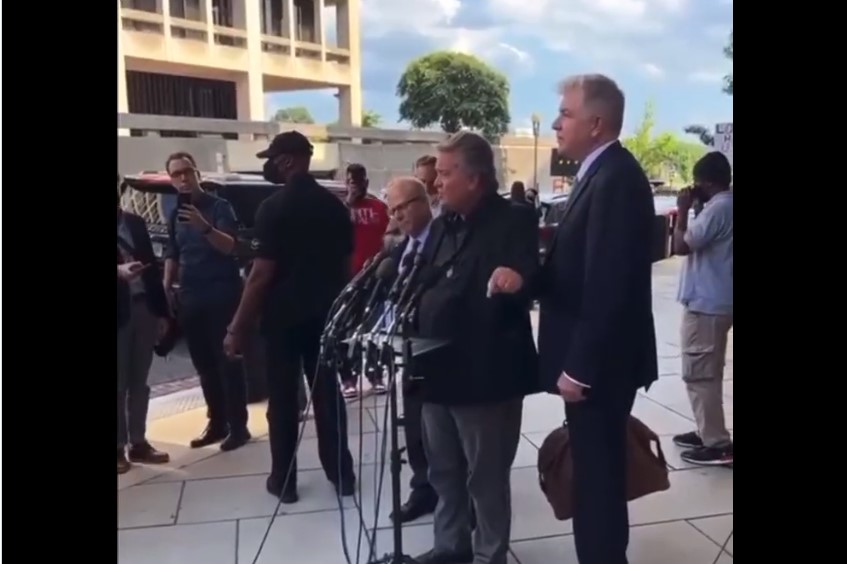 Day two of Steve Bannon’s trial found him outside the courthouse laying out a major rebuke to US House Committee Head- US Rep. Bennie Thompson, a Democrat from Mississippi who didn’t come to the courthouse to make his case against Bannin- but sent a staffer to do the job, and that staffer pushed misinformation about the day.

The long-delayed trial began in earnest in the District of Columbia after an arduous jury selection process and a spat over key evidence,” the Washington Times reported on Tuesday.

Amerling was said to have made the case very clear that Bannon is facing a political trial, because of her description of what happened on the 6th.

“This case is pure politics, Viva Frei said in his post-trial day podcast. And now we know why Bannon was so fired up when he spoke.

Bannon talked to the media after then trial day, saying:

“It’s very simple. Bennie Thompson sent a staffer over here. Where is Bennie Thompson? So Supneas Thompson is hiding behind his phony privileges. He subpoenaed people and is dodging them,” Bannon said, slamming Thompson.

“He is too gutless to come over here himself! He made it a crime. Made it a crime, not a simple charge of wanting my testimony, but a crime,” Bannon said.

“So I challenged Bennie Thompson today to have the courage to come to this courthouse if he is going to charge somebody with a crime. He’s got to be man enough to show up here or send somebody like Shifty shift or Fake Banks Swalwell,” Bannon laid out in a smackdown.

Bannon went on to say:

“Or send Liz Cheney from the committee that has the guts to come here and accuse somebody of a crime. It is outrageous and for them to sit there and try to get a complete hearing and they won’t bring in any testimony. Any testimony that FBI involvement, any testimony? “

“Without any testimony about any other involvement with the FBI or the DHS? This then told the complete illegitimacy of Joe Biden.”

“Trump won Joe Biden is illegitimate and 50 percent of the American people believe that today. And they believe that not from here is the mainstream media from our great colleagues in the media because they won’t show any of that. Information has been suppressed from day one, but almost 50% of American people believe it. They can’t govern this country. He looks like he is legitimate. This is why no head of state in the world, treats him with any respect. 32 approval is no respect. This is what the Saudis embarrassing and humiliating things over. You don’t do that for a legitimate person. United States. “

“We have a constitutional crisis in this nation right now and they charge me with a crime, have the guts to show up here and say exactly why it’s a crime. Then you Thompson is a total absolute disgrace in this show trial. “

You will get the full story. I got to tell you. I’m totally so ashamed of Congress today for sending staffers over here, to try to sell their case.”

“They should be here; the senior people on the committee shouldn’t have to send staffers, they should send themselves.”

Discussion about the executive privilege aspect, changing his tone slightly from Day one.