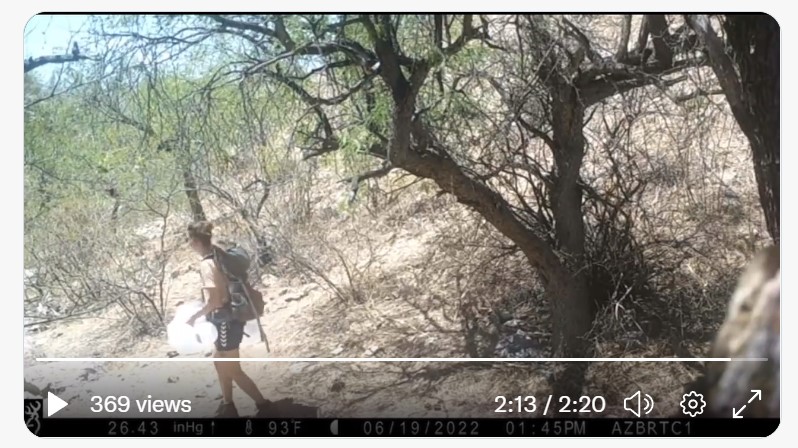 Ben Bergquam, the host of Law and Border on Real America’s Voice, exposed that they left and their corrupt Non-Government Organizations are assisting the massive criminal enterprise at the US Southern Border by leaving provisions for criminals- to make their trek inside our country easier.

Simply- the left is helping Mexican Drug Cartels to smuggle humans and drugs into the USA and here is proof.

“We are here to check on some of the water drops that the leftists leave behind, as well as the trails where illegals are coming in, Bergquam said in the following video.

“We are checking some of Tim’s game cams to see just how much traffic illegal traffic is coming through here by the people who are using the distraction that you get with open borders, to move drugs around,” he said, introducing the footage they are about to show of Drug cartels walking through the area, and then young women coming behind and leaving what appears to be white jugs of water, food and socks.

Bergquam reminded his viewers of the types of distractions law enforcement was seeing with massive migrations at choke points, which kept them from patrolling the less traveled roads like he was exposing, saying, “This is the distraction that the left is creating in these places, like Yuma- to move drugs and people through these areas.”

Ben turned to his partner and said: “Tell us what we’re seeing Tim.”

Pointing to a screen that shows the dirt path where they are, Tim said: “This is heading southbound. See, they have beverages in their hand, and there was a Multicam to get another view. You see there’s a holster on his right hip. And this guy,” he said, pointing to a second man, said, ” you can’t see his holster.”

“So now they’re going back and they rare going to grab a group. This is a 5:05 in the afternoon, and at 5:30, they come back with a group of men with packs, dressed in camo,” Tim said.

“So we’ve got cartel,” Bergquam said.

“Yep, this is on American soil. Look at that guy’s see that pack. And it is squared, so is the second one’s probably drugs,” Tim said.

“They are all wearing carpet shoes, there are no bed rolls. Those are big packs. Double pack for more drugs. So we just saw the footage of the cartel members,” Bergquam said.. “And now we see our so called humanitarians that are leaving water for the cartel. This is food. That’s the food, canister, food, and socks and food.”

Bergquam has explained before that from his investigations, carpet shoes is a covering of carpet over the bottom of shes, which makes it impossible for law enforcement to detect shoe patterns.

“They move the water, they are the enemies within and they think that they’re doing good work. And all they’re doing is aiding and abetting the cartel,” Bergquam said in closing.

This is all because of the open border policies of Democrat Joe Biden.