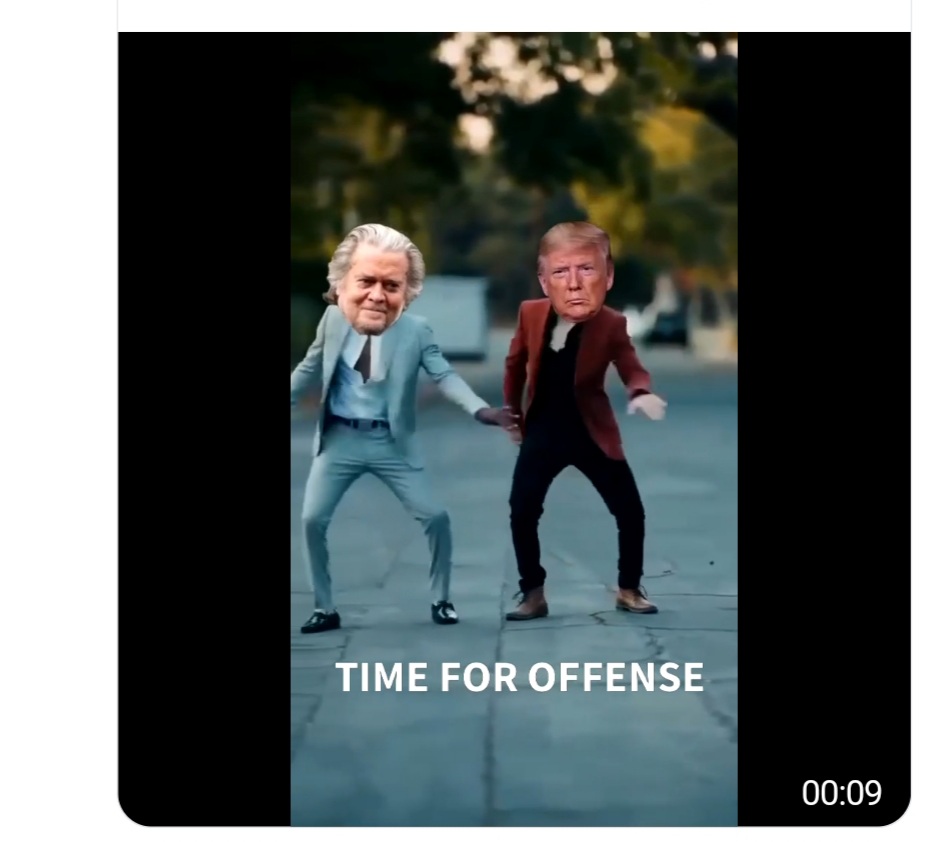 Stephen K. Bannon keeps rising to fame and power as the leader of a Populist movement that is smartly invested in every election from local government to the Speaker of the US House- to the US Presidency. Bannon, along with Dan Schultz, is also instrumental in educating voters about the Precinct Committee Project– to fill up the Republican party for full action ahead of the 2022 and 2024 elections.

At the sound of Bannon’s voice, the viewers of his War Room Podcast will dive into smartly targeted political action in places where it counts- and the country is seeing results in election victories like in Virginia earlier in November.

And they see failures- according to one recent story about the impotence of a well-known radical far-leftist and former US President.

Fox News reported on the laughing stock who used to rule the world:

Republican Daniel Rickenmann, a businessman and Columbia city council member, defeated Democrat Tameika Isaac Devine 52% to 48% on Tuesday night in Columbia, which sits in a county that President Biden carried by almost 40 points in 2020.

While Bannon is basking in victory after victory, talking about his branded “economic nationalism” and Conservative Populism,  Barack Hussein Obama. They used to rule the world with Marxism-has no power anymore. He can’t even help someone win a little Mayor’s race is a “deep blue” area.

PROPAGANDA WARNING REMEMBER ‘YES WE CAN’?

Remember that Conservative-Populists, including Bannon, in 2008, told you Obama’s pipe dreams would only humiliate the country. Unfortunately, Bannon was right then, too- and Obama’s Marxist messaging and tactics have become toxic and powerless to move people.

News of Obama’s election humiliation comes after the news of his great “Organizing For America’ machine hit the skids and fell apart.

I wrote about Obama’s Organizing For America dysfunction- recently:

Obama started his reign as a meme- and a song.  Recall the early propaganda techniques that moved so many hearts and minds.

There was the art:

Thre was the music:

Americans used to clamor to hear Obama speak as if every word he said was given from the great oracle of humanity, and a few years later, people are doing the opposite of what he says.  In one town, voters ignored Obama’s political endorsement, which is the most recent set of humiliating factors for the washed-up Community Organizer.

Even the haughty New Yorker had to admit that Bannon has caused them to lift an eyebrow and investigate- in a recent article titled, How Big a Threat Is Steve Bannon? The case of Donald Trump’s former adviser marks a strange and perilous period in American Democracy.

In the article, author David Rohde wrote about the day Bannon showed up at the FBI field office to turn himself in after being found guilty of Contempt of Congress:

Bannon’s statements, his demeanor, and his social-media live streaming were no surprise. He was employing the same circus-like tactics that date back to his tenure as Trump’s campaign chief, in 2016, and as White House strategist, in 2017. He appeared, above all, to be enjoying himself. Both before and after surrendering to the court, Bannon signalled that he planned to use the proceedings to cement his standing among Trump supporters. On Capitol Hill, some Democrats seemed satisfied, too. A staffer told me that Bannon’s defiance showed that the groups that tried to overturn the 2020 election are still active. “The threat to democracy continues. It hasn’t gone away,” the staffer said. “We’re seeing it in real time.”

Did you see that?  Circus-like tactics, threats to Democracy- ha!

According to the New Yorker- when Obama leads with Community Organizing and propaganda, it is historical and magical. Check out right:

Now the New Yorker and many other Marxists are eating sour grapes and pouting about Bannon. Isn’t that so sad? I guess it’s not so funny when the rabbit has the gun?

*note to the left- a gun reference not meant to indicate any type of gun violence.

The Marxist left talks a lot about their love of Democracy; they were fighting for utopia the whole time.  At least Bannon knows we are a Republic, and therefore he is much more likely to make lasting victories with proven winning tactics.

Bannon once told a group of Black Small businessmen in Washington DC, “I will tell you who a Community Organizer is- someone who will kick your butt.” Bannon understands the left like few others in the political world knows- and that makes him powerful.

In fact, Bannon is Saul Alinsky’s dream come true- he is someone who is not afraid of kicking in the gates of Hell- looking it straight in the eyes- organizing it- and setting it on a political target.

All hail Steve Bannon- “King Community Organzier.” Hat tip to the War Room Posse for getting the work done.