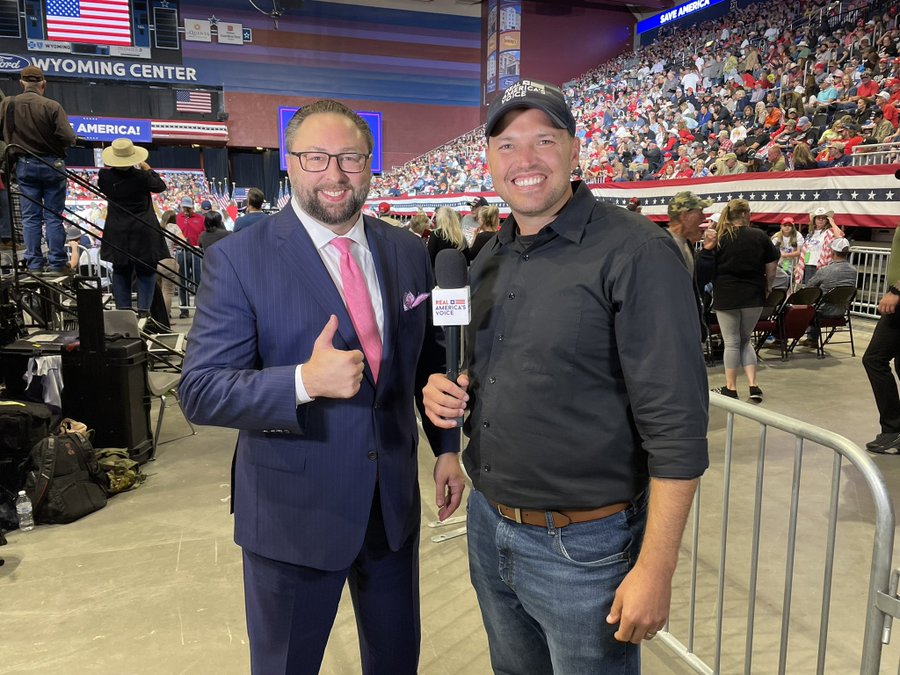 Ben Bergquam is a correspondent and investigative journalist for Real America’s Voice and a leading show host on the topic of the Southern Border, which is the focus of his program- Law and Border.

Bergquam’s journalism and coverage are about serving the American people with the very facts and truth that the powerful elite politicians do not want out in the public stream- so it is no wonder why he exposed fraud on the people when he saw it.

Bergquam, whose courageous live reporting puts his life at risk, is often the target of leftist media- and unafraid- he busted a fake news hoax all by himself in one Tweet.

So, add ‘the slayer of Never Trumper fiction‘ to the long list of Bergquam’s accomplishments- because he busted a scheme to defraud the pro-Trump movement- just this week- at the latest Trump rally in Wyoming.

Leftist pundit lies about the attendance of the Trump rally, Bergquam busts the lie.

Check it out, woman busted for lying about the size of Trump’s rally crowd- like a Maoist shame tactic- that the left can just not stop trying to use on Americans:

The full circle if you thought I stopped early to cover something up. Nope, it was completely packed, other than the picture of the seats that couldn’t see the President! Remember, these are the same people that pushed the “Russia Collusion” lie & committed the real insurrection! pic.twitter.com/xL6QTfsWzl

Oliva Nuzzi, identifies herself on her Twitter account as: “Washington Correspondent, New York Magazine. Strategic Adviser, Vox Media. Writing a show for AMC. Writing a book with @RyanLizzafor Avid Reader Press” and has quite a large following of gullible people who trust her journalism.

And from her posts, Nuzzi shows a total lack of intellectual curiosity on major topics of concern to the American people such as the 2020 election, in favor of pushing a company line that protects the established order of Washington DC.

Nuzzi on her timeline- shows that her journalism is more about bringing comfort to the powerful elite than it is about serving the American people, so no wonder she can lie so comfortably about what really happened at the Trump rally.

Donald Trump is now repeating his claims about absentee voting and his belief that all voting should occur on a single day with paper ballots which, as a reminder, is part of what contributed to his loss in the 2020 election.

The obsessive attempts to discredit the American people and their interests in an America First agenda- is shocking at times, but when people like Nuzzi betray readers with propaganda- on this level, she should be called out for pushing Fake News.

And we should all laugh- because after decades of having no other media choices- it is fun to know we have other outlets to tune in to hear from.

Such as Real America’s Voice and Frontline America and others.

Readers here can always count on Ben Bergquam to hold American interests close to heart because the truth is- Ben has a long track record of activism that is firmly grounded in being an American First.

Nuzzi’s posts whisper that she views herself as a media elitist, pointing a sharp stick at the media who attended the rally from other outlets, the ones who reach Millions more Americans than her media does.

While Nuzzi has a large Twitter following of 343.7K followers- one has to wonder how many of them are real people.

When the crowd turned and booed the “fake news,” members of the far right media on the press riser laughed and smiled.

Consider the passive-aggressive digs about what concerns Americans in this tweet:

It is ironic that Right Side Broadcasting has reached hundreds of millions of people over the years- and they built their massive powerful reach by showing the crowd size at Trump rallies- when everyone was trying to hide the crowd size.

Isn’t that embarrassing for Nuzzi? But then again- what do you expect from the New York Magazine? I happen to subscribe to see what Americans are NOT interested in, myself.