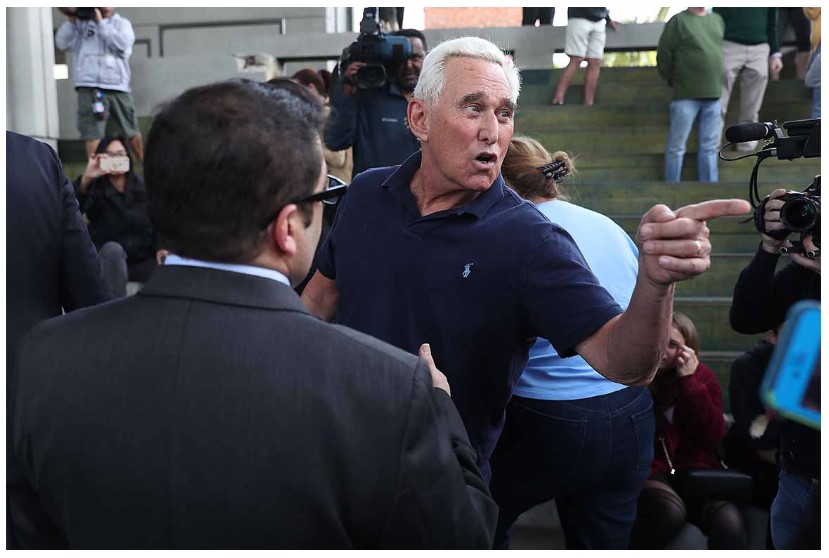 Michael Sussman, a Democrat, is the foot soldier for Hillary R. Clinton and the other masterminds of the Russiagate hoax against the American people.  He walks free today, even with evidence that he lied to the FBI.

Sussman was let go, after seeing overwhelming evidence that he was guilty.

Roger Stone, a Conservative-Libertarian- Republican, was arrested,  dragged thru court, threatened, bankrupted, and continues to be harassed by the media- was pardoned by President Donald J. Trump after almost losing everything.

Stone was convicted of lying about something that never happened.

Stone is largely responsible for the Presidency of President Donald J. Trump after working on convincing Trump to run for a very long time.  Stone, a decades-long winning political strategist, saw in his friend, Trump,  a winning candidate- and Stone was right. Trump won Big-ly.

From the moment that Trump announced he was jumping into the 2016 presidential election- Stone’s name was brought up in media reports as an ally of Trump’s, and at about that time, the Government Swamp went into overdrive to persecute Stone and capture him so they could punish him for his Conservative-Libertarian political activism for his belief in the goodness of America, and for Trump.

But really the Swamp monsters wanted to punish Stone- because after being one of the most highly connected political pundits in DC for eons- Stone rejected their hateful culture of America last and became a champion of the little people.

How dare he do that!

The swamp stains have never forgiven him for walking away as he did.

By his actions of rejecting the establishment, Roger Stone lowered himself to common American and became a target- just like the rest of us have always been.

But with Stone’s political persecution came the combined efforts of the Government worker -Intel employee-Media activist and swampy state that almost destroyed Stone, his family, and his whole life.

Yet our hero persists – and today- on the very day Michael Sussman is acquitted- Stone makes a very good point; he STILL did nothing wrong.  And Stone’s persecution by media trial shows that there is a two-tiered system of justice in Washington DC- that stinks to high Hell.

“The FBI agent who supervised the 6 am raid on my home and arrested me in 2019 knew in 2016 that the Russian Collusion evidence was fabricated by Hillary’s agents,” Stone told me, making perfect sense for anyone outside of Washington DC bubble of accepted corruption.

Now we will really see who is the swamp- and who is not because swamp people can lie with impunity.

On May 24th, FBI Agent Curtis Heide testified in the Sussman trial that the FBI leadership was “fired up” about investigating this purported secret communication channel between Trump and Alfa Bank.

“Agent Heide claimed from the stand in the Sussman trial that by September 26th of 2016, he was certain that these allegations about a secret communication channel between Trump and Alfa Bank were unfounded. So, How does one “lie to Congress “about things that we now know definitively never actually happened? Stone asked.

On May 25 Red Voice America reported about Heide:

The trial against Michael Sussmann, who is accused of lying to an FBI agent in September of 2016 when handing off now-debunked allegations regarding Trump and Russia, has brought about more interesting testimony from an FBI agent.

According to a report from Just the News, an FBI agent on May 24th testified that “fired up” leadership within the FBI insisted on moving forward with the investigation into Trump despite there being lacking evidence to pursue such an endeavor.

Red Voice Media previously covered testimony from the Sussmann trial that took place on May 17th where an FBI agent, Special Agent Scott Hellman, confirmed that he and his supervisor had determined within 24 hours that the Trump/Alfa Bank allegations brought to the FBI in September of 2016 were unsubstantiated.

The aforementioned testimony rendered by Special Agent Hellman didn’t pull any proverbial punches with respect to how farfetched he thought the allegations were, saying, “I did not feel that they were objective in the conclusions that they came to. The assumption that you would have to make was so far-reaching that it just didn’t make any sense.”

Flash forward to May 24th, FBI Agent Curtis Heide testified that leadership were “fired up” about investigating this purported secret communication channel between Trump and Alfa Bank.

Agent Heide claimed from the stand that by September 26th of 2016, he was certain that these allegations about a secret communication channel between Trump and Alfa Bank were unfounded.

Learn How To Protect Your Life Savings From Inflation and An Irresponsible Government, With Gold and Silver

This conclusion by Agent Heide was reached by not only his own analysis, but that of a review from the FBI’s cyber team, an independent assessment by cybersecurity outfit Mandiant, and talks with Spectrum Health about a Tor exit node.

In other words- they all knew Stone did nothing wrong- and today is a reminder that choosing to opt-out of participating in a big collective Government borg- seeking dominance in the lives of regular Americans- can cost a person dearly.

Being a part of it- is a “get out of fail free” endless stack of cards.