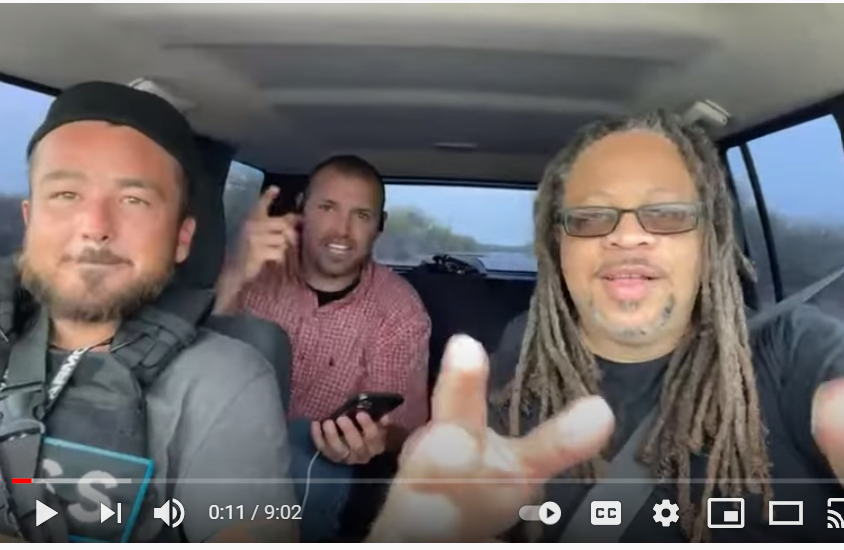 On Tuesday Will Johnson of Unite America First, Ben Bergquam of Frontline America, and Anthony Aguero of Border Network News, joined forces and collaborated on a trip to the Southern Border to investigate the human crisis that is unfolding as a result of Democrat Joe Biden’s policies, which appear designed to bring people from the most remote villages and areas and get people to cross over the border and into the United States.

“We went to some shady areas today,” Johnson told his audience.

All three independent journalists are recording and investigating places that most American journalists are ignoring. As Will Johnson was driving, Bergquam and Aguero described a situation that the group had recorded with Aguefo overheard a conversation in Spanish, where a man who appeared to be a member of the cartel was inviting others to come and harass the group.

Working at the guidance of border patrol, overheard is Bergquam and Johnson discussing where they were told the group could go:

“He said we could go down in there, but to be careful,” Berquam tells Johnson.

“We had a cartel drug runner, coyote saying that he had white boys,” Berquam said, showing the Rio Grande River and the debris left behind. “You’ll see underwear, shorts, and black plastic bags; they keep all of their clothing they want to keep dry. So, where are the environmentalists who should care about how much dumping and debris are left behind all along the border?

The Cartel and the media do not want you to see this. We are putting our lives in danger to show you this. The stories are worse than you can imagine; what is happening to these children is worse than you can imagine. I am asking the questions. This is not made up. We have the video evidence. We bring you here, and the border patrol told us how many children are being recycled; these children had scary stories. These kids have experienced so much trauma they can not be incorporated into our society. It is a mentality in some of these countries, where murders are normal. Everything that is going on here, what the left is doing is putting more children in danger. We need to call out the monsters who are preying on children, and protecting the leftist groups, who are going to make Billion dollars, are supporting cartels,” he said.

In the following video Ben gives a guided tour of the border along the Rio Grande River.

Check back daily for more videos and content about the human crisis on the border.