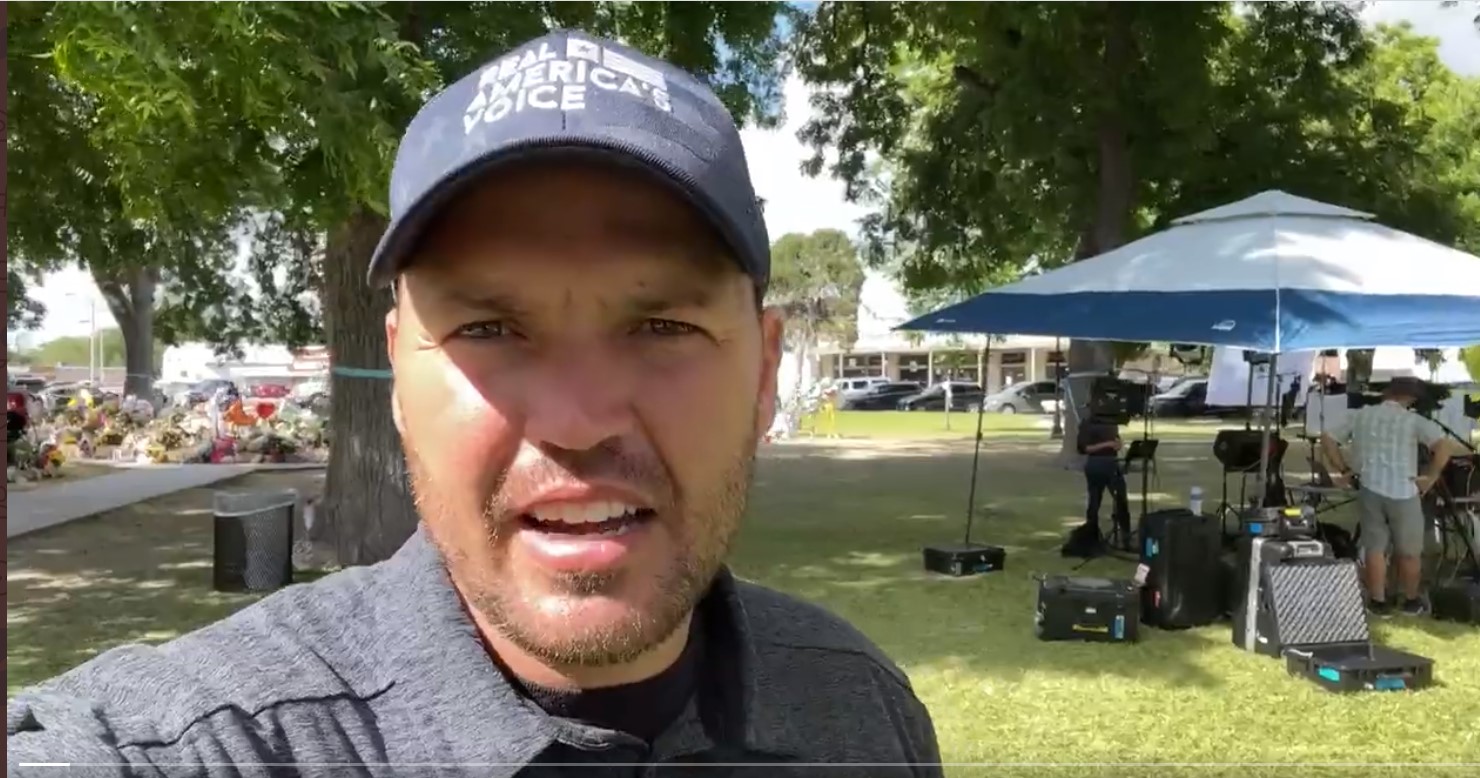 Over one shoulder you see Ben Bergquam in front of makeshift street monuments to dead children in and their two teachers- and over his other shoulder, you see the Lapdog Media, the Fake News, the propaganda outlet for the Democrats.

You are not going to get live reporting from Uvalde Texas- like we get from Ben Bergquam, a top correspondent for Real America’s Voice and founder of Frontline America, anywhere else, make sure to follow him @BenBergquam on GETTR and Twitter.

“You want to stop school shootings, invite God back into our society,” Bergquam said, against a backdrop of a mourning community in Uvalde Texas.

In the video we see Ben walking among stuffed animals, cards, posters, flowers and candles all bunched up together in large piles- which is the now customary reaction of a community in pain after an evil mass shooting.

And in the video, he shows tents set up and shows us media people, media people most of America has come to distrust.

And there is a hint of their deceitful approach to the story of Uvalde and other hurting communities, isn’t there?

There is an element of fraud from our civil servants, politicians and their media allies- who pose for photos and make speeches, in a sort of fake grief, from the places where communities are broken in grief over these mass shootings.

“From Uvalde Texas. All of these filthy Democrat propaganda #fakenews media outlets and politicians pushing gun control ignoring the evil they’ve invited into our country!” Bergquam reported, on the recently published video.

Ben is on to something,he reminded me of that passage in Amos. Think of the professional mourner. Professional mourners, also called moirologists, are actors hired by family members to grieve at funerals and wakes. The intention is to increase the number of funeral participants, provide new faces, show support for the deceased, and help people deal with a tragedy through other’s expressions of grief.

They may not be getting paid directly- but can anyone honestly say that our lapdog media are not just playing a role and acting?

Do you ever feel like the Democrats and their lapdog media allies mourn for deaths they do not really care at all about? Do you ever wonder why – if the left appears to be mourning the deaths of gunshot victims- why do they never want to get to the bottom of why the shootings occur?

The Democrat left appears to mourn over shooting deaths- yet their solution is always the same- grab guns from the very same law-abiding people they openly want to dominate.

That is a conflict of interest-Isn’t that weird?

Ben Bergquam reported live from Uvalde Texas on Thursday and shared his thoughts about the absence of curiosity from the mainstream media and political pundits- who he has observed just reciting a company line- and not investigating the motives of the shooter.

Consider this, he is reacting to the media- as if they are professional mourners.

“You have all this media here, CNN here pushing gun control and never questioning the evil they have let into the country. There are more people shot by ‘assault weapons’ in Mexico that we have here. This [school shootings] are because we took God out of our society,” Bergquam said.

What do professional mourners do?

Some people and some cultures encourage large outpourings of emotion at funerals. So a professional mourner at such a funeral would be expected to mourn in an exaggerated way. Some cultures or people might lean more towards quiet and dignified exhibitions of emotion, and a professional mourner would be expected to reflect that.

Why were there professional mourners in the bible?

There are professional mourners in the bible because the Hebrew people trace their roots back to ancient Egypt. Many of the traditions of Ancient Egypt found their way into the Old Testament of the Bible, which in large part is made up of Hebrew scripture.

Here are some questions, are you tired of the fake mourning? Are you tired of the actors-America? Have you had enough of the kabuki dramas of political theater- while elected civil servants hold us back from solving the problems that face our nation?

You don’t need the government’s permission to invite God into your life- but we may need to change civil servants to invite God back into the public square and schools.

We can do that in November- until then, for more information on how to invite Jesus into your life- remember Billy Graham who helped transform America once, and we can do it again- the same way-the answer is to seek God and His ways.