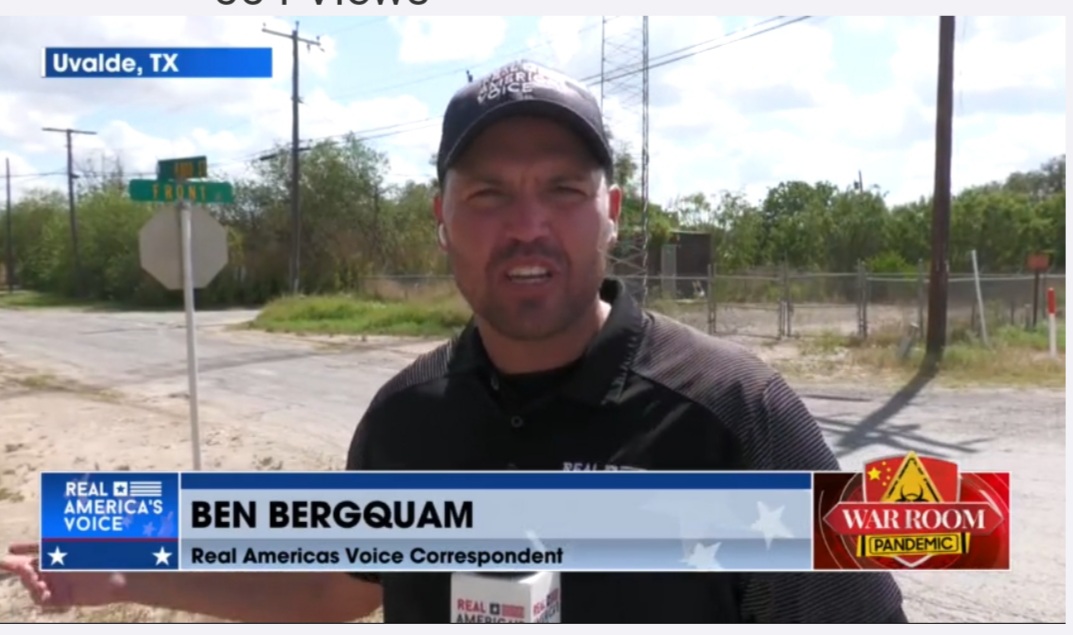 We have exclusive reporting about the details that are not being investigated by the lapdog media, which Americans really need to understand about the small town of Uvalde Texas.

Uvalde is the small community where both an invasion of our country is happening and the tragic mass murder of school children and teachers happened recently.

And this is especially chilling once Americans understand that under Democrat Joe Biden- all American towns are turning into ‘border towns’.

While in Uvalde to investigate the shootings to Steve Bannon, Ben Bergquam reported:

“We are at the intersection of the Invasion of our country and the evil wokeness that is destroying our country”   Bergqaum reported, showing that a major hub of activity for illegals to get into the USA- which is right down the street from where the Uvalde school shooter and his Grandparents lived in Uvalde Texas.

“It is all connected. What is coming up from the border, the illegal crossings at the border and the weakening of our police force by the woke left. And we were digging in,” Bergquam told Steve Bannon on a Wednesday War Room podcast.

It is only Bergquam who is showing the very close proximity between the killer’s home, the school where he murdered school children, and the hub of activity for illegals.

Bergquam is also a frequent traveler to the small towns along the US Southern Border- including Uvalde Texas, where he investigates the massive border crisis that has taken root there.

It is Bergquam’s courageous reporting from Uvalde, shared on Real America’s Voice and with Bannon that is providing the most accurate glimpse into the embattled small town- where a recent tragic mass shooting happened in May,  and it is Berquam who is providing details on the questions most on the minds of Americans- where did the shooter get the money? How did he get to the site? What were his connections to the Cartel in the area?

Bannon revealed on a recent show that he believes the young shooter of the Uvalde Elementary school, Salvador Ramos, got money from human trafficking for the Mexican Drug Cartels- the same Cartels who seem to be getting assistance from Democrat Joe Biden:

At 2:00  “I am telling you- how he got the cash is tied back to the trafficking of human beings, guns, and drugs.  Everyone is walking around like they are in the mumble tank- but tell me the cash business that is blowing through town.  It is not from the Wendy’s he was working at for dollars an hour.  How did he get the ammo that quick?” Bannon said.

BANNON IS RIGHT ABOUT HUMAN SMUGGLING AND TRAFFICING

“What about those 48 Lockdowns at the schools that you uncovered two weeks before the shooting,” Bannon said to Bergquam, referring to the following interview of Uvalde Mayor:

Two weeks before the shooting Uvalde Mayor Don McLaughlin tells me their schools were locked down 48 times in the last year because of illegal alien bailouts! Biden ha abandoned our border communities. Guns are not the problem, democrat policies are!@RealAmVoice @realLizUSA pic.twitter.com/gXtf8UWem1

WHAT ARE THE LOCKDOWNS CAUSED BY?

From Bergquam and Bannon’s reporting we know that the small community of Uvalde was experiencing a massive rise in Human Smuggling, Human Trafficking and other crimes-which resulted in something called ‘bail outs’.  Those bail-outs would put the schools into a full campus lockdown- as discussed in this article from April 2021:

Bergquam, in the above war room video, interviewed community members who knew Ramos and had detailed the lapdog media is ignoring.

This is only getting worse- Bergquam said. “The Cartels are exploiting what happened in Uvalde by increasing their drug trade because we are focused on other things,” he said. “This is all because of Joe Biden’s policies.”