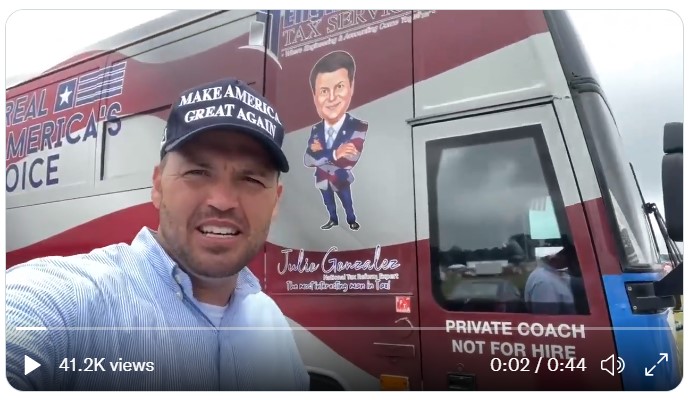 Ben Berquam and his friends are rolling all over the United States in a bus tour, interviewing real Americans for Real Americas Voice and bringing inspiration with them. Joined by Amanda Head, Jeremy Herrell and David Bray, the team has found some exciting adventures to close out Summer 2021.

Recently the Save America Freedom Bus Tour attended the gigantic rally for President Donald J. Trump in Alabama where Bergquam made the news.

Some awesome footage from that event includes this sweet little American citizen:

Consider this recent article from 100% fed up, about Bergquam’s appearance:

” Ben Bergquam of Real America’s Voice (RAV-TV) News tweeted out a video showing the enormous crowd lined up for Donald Trumps Rally in Cullman Alabama on Saturday. The line of people seemed to stretch for miles which surely triggered defensive liberals, who can’t stand the fact that Biden’s rallies were so poorly attended, every participant could’ve carpooled together in a single mini-van,” 100% Fed-up wrote.

Even when Ben is having fun, he reminds us of the crisis on the border, and the effects of the disastrous policies of the Biden administration. Check it out:

I don’t want to hear a word about COVID from leftists until they stop letting in millions of illegal aliens across our southern border! It’s not the Delta Variant, it’s the #BorderVariant that Democrats are sending across our country that is putting every American at risk!