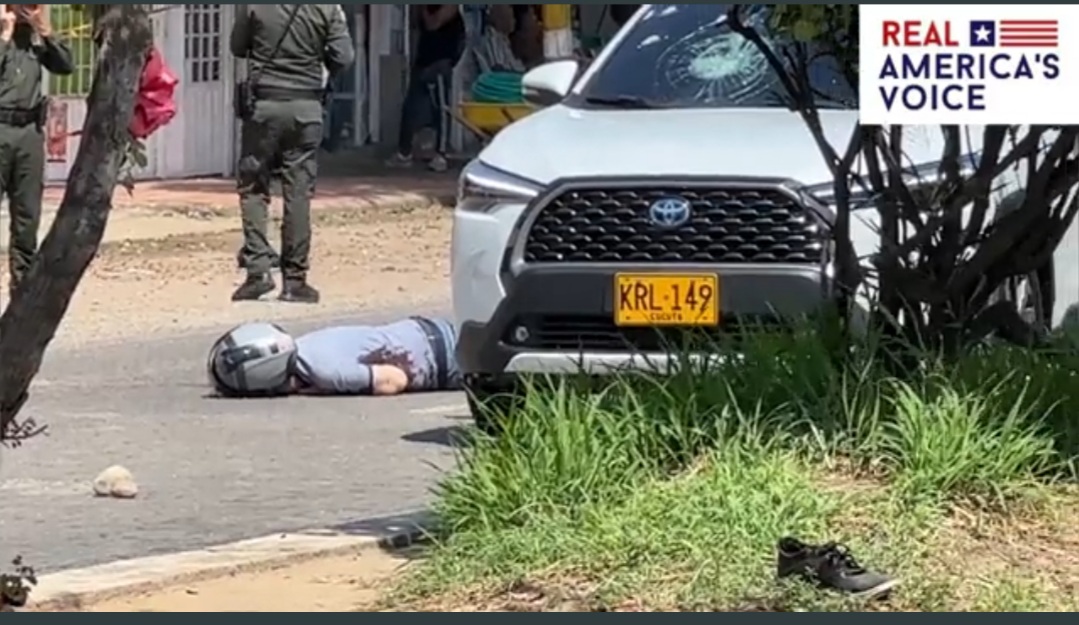 Ben Bergquam, the host of Law and Border, is on the border of Venezuela and Colombia with fellow Real America’s Voice Correspondent, Oscar El Blue, and together they are looking for clues for why the American border with the US and Mexico has exploded into a mess of crime and human suffering.

While filming a segment for Steve Bannon’s War Room on Friday, the two reporters were informed that a deadly hit had taken place in broad daylight, killing two men just three blocks from where they were at the time.

“The Democrats are inviting this kind of crime into America,” Bergquam said while pointing out a dead body in the street of a bodyguard who was killed along with the man he was protecting.

Bergquam connected the crime and the problems with the open borders with the stolen election in Arizona, where Kari Lake lost a highly suspicious race for Governor.

“This crime is why the cartels stole the election from Kari Lake, because she was going to stop their access to the United States,” Bergquam said about the Nov election for Governor of Arizona.

El Blue said into the camera, explaining the situation from his point of view, that the open borders in America have caused crime and insecurity in Central America and South American countries because it has increased the power of the drug cartels who have taken over the communities at the borders of all of the counties in the United States, Central America and South America- and ignited crime sprees.

And those countries are all in chaos from the economic damage caused by out-of-control Socialism and communism, where elites are comfortable and wealthy, and everyone else is suffering.

Bergquam and El Blue have traced the massive migration of Central and Southern American economic migrants into the US, back to the border of two other countries, where they can see the devastation that Socialism has caused people by simply observing the movement of the people.

People eventually have to flee their own homelands and look for new opportunities.

Bergquam recorded what he and Oscar saw, that were the origins of the problems:

“No better example of the failure of Socialism! From Cúcuta, Colombia where full carts of food go in to Venezuela and empty ones come out. Feeding the starving people Maduro’s communist government can’t provide for. When will the world learn? #SocialismKills!”

The area is hazardous. Murders happen in the middle of the street around pedestrians.

“Exclusive footage: Sicario hit three blocks from where we were live in Cúcuta Colombia on War Room with Steve Bannon! This is what open borders Democrats are inviting into our country!,” Bergquam posted.

For more on the trip that Bergquam and Oscar are on, looking for clues to the invasion in the US, please check out our other articles: