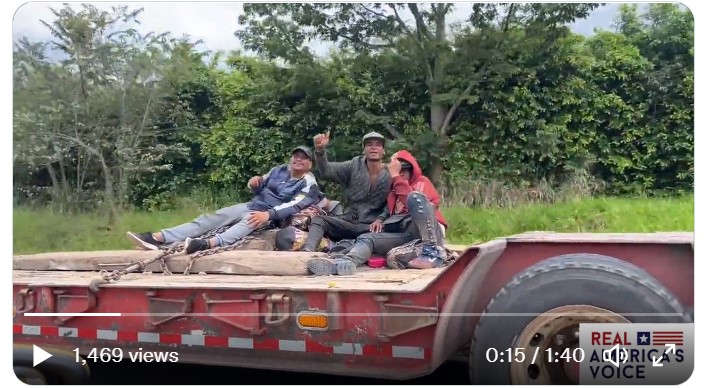 Ben Bergquam and Oscar El Blue, two correspondents for Real America’s Voice, had an interesting interview on their second day in Colombia, where they have been looking for clues in Central and South America for why so many people are fleeing their homes and heading toward the US Border with Mexico, where a Democrat designed mass invasion is chaotic and dangerous.

Here are some of the clues the two discussed with War Room host, Steve Bannon. What they have uncovered on the border of Venezuela and Colombia- about what is driving people to leave their homes and make their way toward the US,-is not something the Democrats want Americans to know about:

GLOBALIST-COMMUNIST HELL: The Democrat Roots of Mass Human Migration That is Destroying all of the Americas

As noted on Bannon’s show, Bergquam, the host of Real America’s Voice- Law and Border, and El Blue are reporting from very dangerous locations.

On the first day of their journey, Bergquam and EL Blue were close to the location where a drug cartel had taken two lives, and they saw dead bodies in the street.

Bergquam on the Border: ‘Socialism Kills’ Here is Proof, Dead Bodies in the Street

As the two investigative reporters were traveling to their next location, they uncovered a solid reason why so many people were coming from the reason to the US, and that is because people know the border is open.

While traveling down the road, El Blue yelled over to a group of three men who were riding on the bed of a flatbed truck and asked them where they were heading.

Their response is should be surprising…

Wow! Planes, trains, automobiles and even the back of a flatbed semi truck, illegals are heading north. They’ve got the message… “the Border is open!” #BidenBorderInvasion from Venezuela to the United States. With @Oscarelblue
Only on @RealAmVoicehttps://t.co/yoCoQPCRgV pic.twitter.com/gIOX6nGZMx

If you like these stories, please support Frontline and Ben Bergquam by visiting our sponsors, like My Pillow: