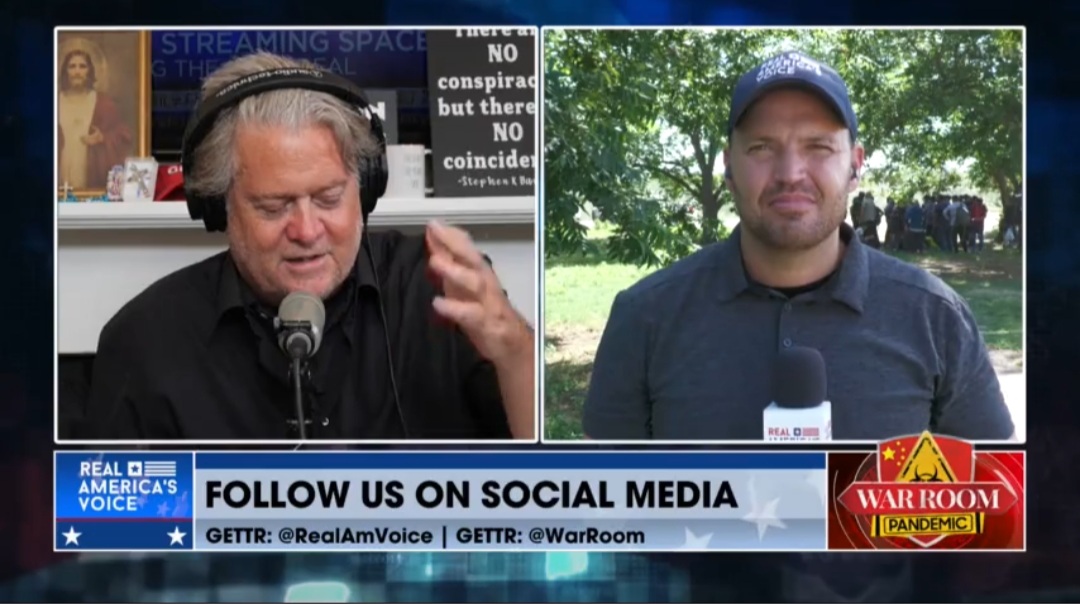 Ben Bergquam is a correspondent for Real America’s Voice, the founder of Frontline America, and a frequent guest of Steve Bannon’s War Room show- and this week, Bergquam really spelled it all out in plain language what the Republican Governor of Arizona needs to do to help save America from a declared invasion of foreigners on the southern border- in his state.

Bergquam and Bannon held nothing back:

BANNON: Roy, Ken, Cuccinelli, Mark, Morgan, Mark Martin, Sheriff Coe, and Sheriff McKinney declared an invasion, the United States in Texas, or Texas, and we’re going out, and we’re gonna start arresting people and send them back across- right? (Bannon said jokingly.) No – really there were no arrests because there was a whole flood of folks coming in there. Of course, the US government put them in vans, to go take them to Greyhound or too the airlines- where they are flying into the heartland of the country. What in the hell is going on? I thought we, I thought we stop this invasion!

BERGQUAM: Yeah, I guess the illegals that were coming across haven’t gotten the memo yet. What it really comes down to is Governor Abbott; Governor Abbott has to declare this an invasion. What you see behind me is just a fraction of what one of the five groups that we saw come across today.

Well over, 200 people showed up. That is well, over 200 mostly fighting-age men coming across the border, and it’s happening all over- point to point to point.

We’re driving back and forth all day today. And it’s just group after group, after group of people that represent money in the cartel’s pockets.

In the NGO’s pockets.

Money in Washington, DC’s pocket’s as they’re pulling it, out of your pockets. It’s not stopping, unless Governor Abbott and the governor’s step up and declare this an invasion!

The sheriffs are doing everything they can. The judge actually came out and said that this is an invasion.

Now, Governor Abbott has to do his job for the citizens of Texas.

BANNON: Who is actually going to see Paxton and go see Governor Abbott? Because this has got to happen.

BERGQUAM: I know they’re talking to him, because I talk to Ken, Cuccinelli after the interview yesterday, and he said they were headed that way.

That’s, that’s the push is on Abbott right now.

There is heavy pressure on Abbott to do this, and not just Abbott; this is other governors as well.

Any Governor could enact this; Governor DeSantis in Florida could do the same thing. The vast majority of the people that you see behind me, this group of about 50 military-aged men, they’re going to Florida the vast majority. That’s where they’re heading. Every single Governor has the authority to do this. The question is, do they have the will? But that’s the pressure, right now.

Abbott has to to quit giving lip service, he has to quit sending in your National Guard down here to be Uber drivers for the cartels.

He needs to declare an invasion and stop aboard before they come in.

BANNON: What about Sheriff Co last week? He has arrested folks. Now he’s got a mandate. What is Sheriff Cohen in Kenny county. Is he arresting people?

BERGQUAM: He so he did he told us that was kind of a unique situation where he didn’t have the room in the hospital for these people. A lot of people are coming over injured so he took him back and gave him the option. They chose to go back across the border, but I think it’s going to come down to that. I asked him that question. He says he’s got something coming out in the next week that he’s going to be presenting. He didn’t want to go on record with it yesterday but that’s the question at some point. The constitutionally elected Sheriff may end up having to fill that void.

Something has to happen because it’s us, it’s our nation, or this Invasion- we cannot sustain this as a nation.

Its National Suicide, but we’re starting to see that where Sheriff are stepping up saying if the governor’s not going to do it, we’re going to do it.

BANNON: You see the games are playing number calms down there. Soon as I get down there with TV camera they are throwing people in the Vans, and getting them up to the Greyhound. They are getting them around on your tax dollar to fly into places like Allentown Pennsylvania. We are going from the ridiculous to the sublime on the southern border, this is a tragedy beyond all others.

This invasion you were there with the four, guys- like the Four Horsemen- what is it that Abbott has got to do?

BERQGUAM: What I’m saying, Abbott’s. Got to do for the American people and the good folks in Texas is that he’s got to grow a pair.

I mean, you said it. This is about Republicans having the spine that they’ve been cowards. I spoke to the landowners who run this pecan orchard. They are sick of weak-kneed. Republicans, don’t even blame the Democrats. The Democrats are the enemies. It’s the Republicans; you’ve got to step up. You’ve got to have the courage to do it. You have to say; I’m not afraid of getting attacked. We’re going to do this because it’s the right thing to do. Be like, President Trump. That’s what Abbott’s got to do.