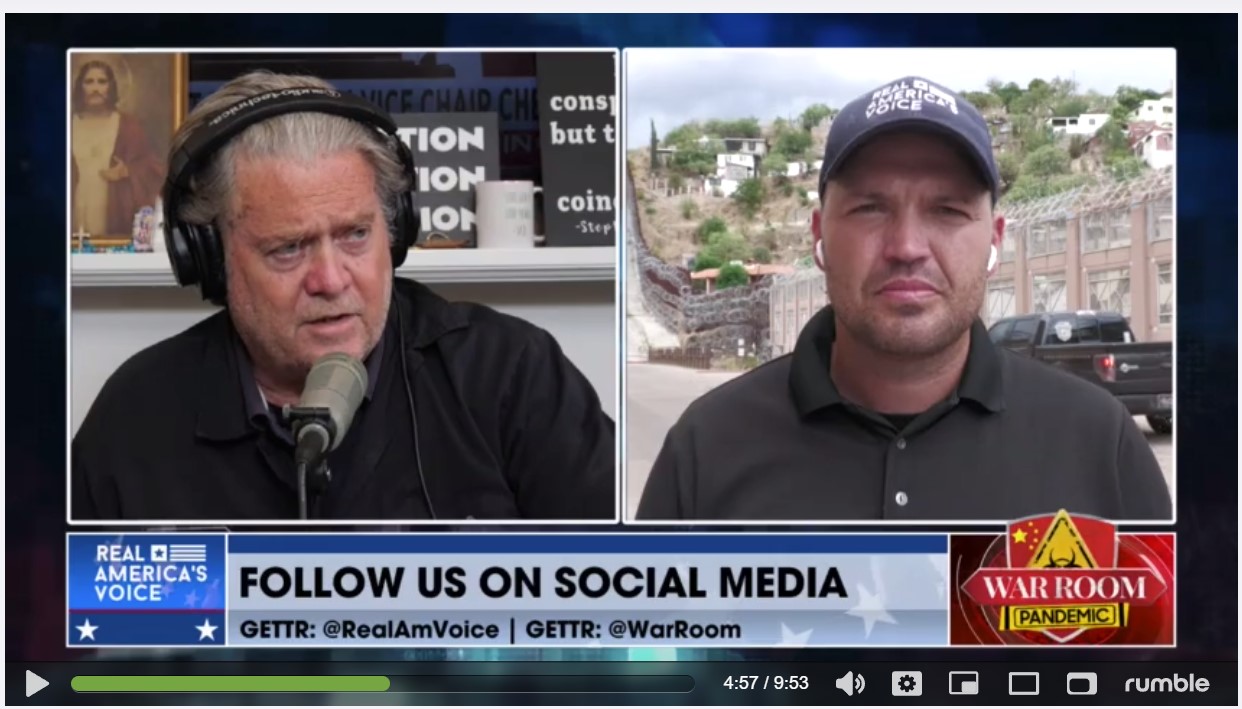 “Border patrol are heroes. These Sheriffs are heroes, they’re saving lives out there while they’re being attacked by the left in America,” Bergquam told Bannon recently on the War Room show, talking about the complete and utter breakdown on the border.

Bannon talked about the only real remedy to the problem that Bergquam described from his long interviews with law enforcement in the border town- as being the impeachment of numerous top Democrats.

Together Bannon and Bergquam agreed that Republicans are not helping law enforcement, either, in the targeted areas- and that needs to change.

Ahead of the 2022 elections, where Bannon, Bergquam and the War Room are making huge shifts in the voting patterns- these issues could topple the Democrat Party along the border- because crime is out of control and people are feeling hopeless.

Bergquam talked to Bannon about a grant program through the Department of Homeland Security for law enforcement called Operation Stone Garden , which was addressed by a number of law enforcement agents- as the first step in a process for those who are trying desperately to solve the border crisis- fund law enforcement- so they could protect and defend the Souther border.

Bergquam is reporting that – according to experts he talked to- the border has never been this dangerous before.

Here are two examples, Bergquam points to- the massive caravan, as described by Oscar El Blue, and the low morale of law enforcement who say they have been betrayed by Democrat Joe Biden:

“I just got word from Oscar El Blue. There’s another group of four thousand that are organizing down there and topics hula. As we speak planning. Leaving tomorrow on a new caravan- that’s coming up. This is not slowing down, it’s only increasing.

“And we know that, like in that video, we’re only going to see more of this invasion. We’re going to see more death and despair as these open border, leftists, continue to push to invade our country,” Bergquam told Bannon.

“Then I  spoke to the sheriff, Daniels of Cochise County, he said, Joe Biden’s has abandoned them. That’s how he feels. Most of the traffic that’s coming through, doesn’t stay here, you don’t see the violence. You don’t see the crime that you see in a lot of the other places in Nogales. It’s all moving through to Phoenix and other ports. But even the sheriff down here, Hathaway said, Joe Biden has never shown up.”

“He said, if they were going to do something show up and then they can, you know the, but at this point, they’ve never had a call that never had anyone down here. Secretarial work, my work has never been here either but again, Sheriff of Cochise, the Daniel said he’s been abandoned by Joe Biden.”

“We understand Biden is trying to exacerbate this, but they feel that Republicans Ducey, and Brnovich are not doing anything to have their back. I was talking to the sheriff, yesterday, and he said, he actually feels like Ducey is doing some good they’re using the state resources that they can on the Operation Stone Garden. Operation Stone Garden gives State resources to local law enforcement to help in the Border fight.”

“Most of the frustration is all directed at Washington DC, but there’s no question about it. Something’s got to give the direction that we’re heading is unsustainable.”

“We don’t stop the incentives that are bringing these people through. There’s the answer that I continue to get when I ask if we are already past the point of no return.

So these guys are they’re amazing, they are absolutely amazing but they are frustrated.

It’s like they’re putting their finger in a dike right at the water. Still going to come over. It’s almost like playing a game now, right.

“We need to talk about the impeachment of Biden,  Myorkas, Garland for the invasion of Southern Border. But at the state level, besides given some additional equipment. What do they need from Brnovichm Abbott and Paxton to, to stop this thing of the state level?” Bannon asked.

“Really it’s going to take using their constitutional authority in declaring this an invasion. And then using those National Guard and state law enforcement resources to then do the federal government’s job, and start sending these people back, there’s going to have to create a constitutional crisis, it obviously will go to the courts.

But in talking to a lot of people, we’ve had some of the folks on here talking about that. There is a provision in the constitution, in the event of an invasion, if the federal government is not doing their job, that the states have the right to protect their City, their
Since and their sovereignty.

And I think that outside of that, you’re right, you’re putting your finger in a hole of a damn. That’s the dams coming down and so that it’s going to take something to that level where they actually go put their National Guard. Resources, their law enforcement resources Down On the Border. They grab these guys. When they’re coming over and they physically, send them back where they prevent them from coming in outside of that Steve.

This is, it is an It’s a disaster. It’s an absolute disaster. It’s a disaster. This is why so many Hispanic Americans have been voting for Maggard. Only very few Republicans from the Rio Grande Valley, South Texas all the way to Arizona New Mexico, obviously Florida, but I hope also California, been, you got the shirt new show.