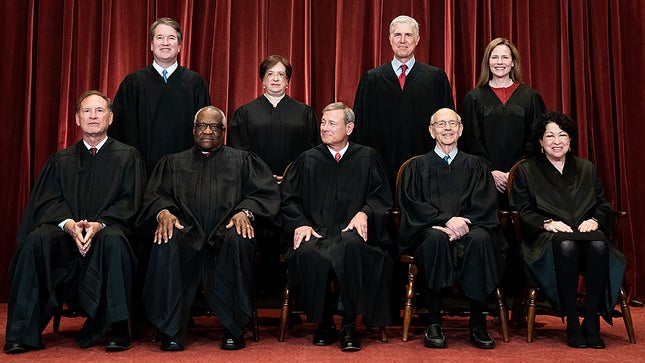 SCOTUS issues stay, blocks Biden vaccine mandate for businesses with 100 or more employees against OSHA, but allow for the vaccine mandate to be used on certain individuals in health care positions.

Justices Breyer, Sotomayor, & Kagan dissent from the decision to block the vax-or-test rule for workplaces of 100 or more employees.

Many posters turned to social media to remember that this ruling is thanks to President Donald J. Trump, including Harmeet Dhillion, who wrote just that- in her reaction to the news of SCOTUS smackdown on Biden’s power grab:

“The Supreme Court has stopped the Biden administration from enforcing a requirement that employees at large businesses be vaccinated against COVID-19 or undergo weekly testing and wear a mask on the job.

At the same time, the court is allowing the administration to proceed with a vaccine mandate for most health care workers in the U.S.

The court’s orders Thursday during a spike in coronavirus cases was a mixed bag for the administration’s efforts to boost the vaccination rate among Americans.

The court’s conservative majority concluded the administration overstepped its authority by seeking to impose the Occupational Safety and Health Administration’s vaccine-or-test rule on U.S. businesses with at least 100 employees. More than 80 million people would have been affected.

“OSHA has never before imposed such a mandate. Nor has Congress. Indeed, although Congress has enacted significant legislation addressing the COVID–19 pandemic, it has declined to enact any measure similar to what OSHA has promulgated here,” the conservatives wrote in an unsigned opinion.

In dissent, the court’s three liberals argued that it was the court that was overreaching by substituting its judgment for that of health experts. “Acting outside of its competence and without legal basis, the Court displaces the judgments of the Government officials given the responsibility to respond to workplace health emergencies,” Justices Stephen Breyer, Elena Kagan and Sonia Sotomayor wrote in a joint dissent.

Popular court watcher and legal analyst, poster ‘Techno Fog” emphasized the response by Trump’s first appointee Justice Gorsuch – which signifies something that terrifies the left- some of our justices actually do care about the safeguard of the US Constitution.

“Gorsuch: The Court applies the major questions doctrine and concludes that OSHA may not issue this mandate. While Twitter promised the OSHA mandate was constitutional – we wrote how SCOTUS would use this doctrine to stop the OSHA mandate. Huge win,” Techno Fog reported about the ruling.