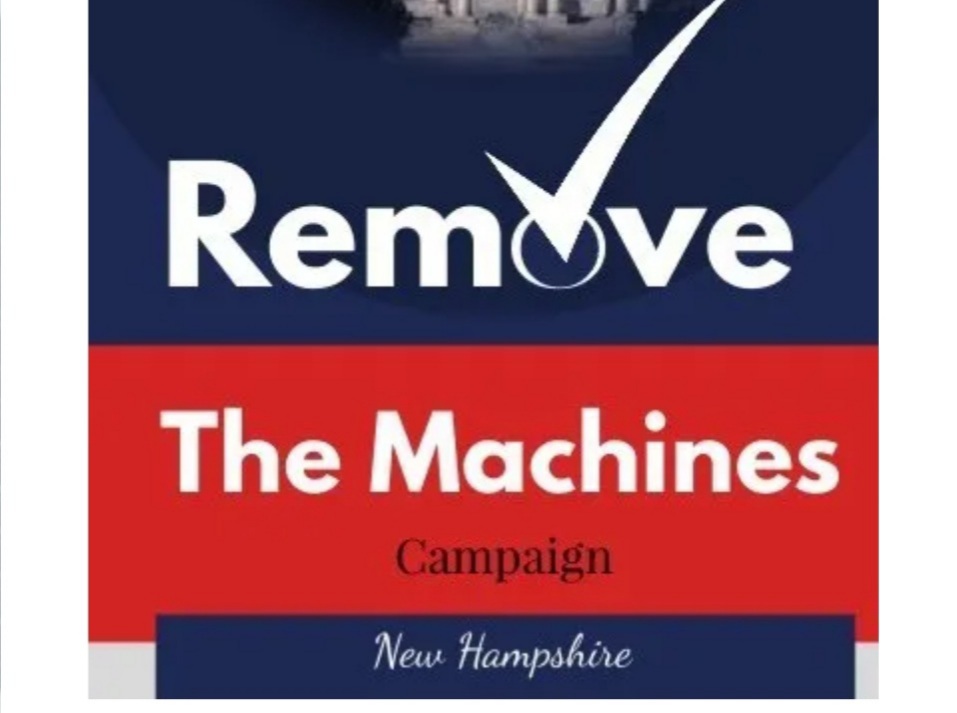 Too many Americans have given hope that they can do anything to fight back on the encroaching tide of tyranny they feel is robbing them of a quality of life and fair elections- so we need to see more examples of people who remain steadfast in the pursuit of American liberty and election integrity.

Here is one such story of one New Hampshire woman who joined with other citizens who are making a difference in their state.

If they are successful, New Hampshire could lead the United States in eradicating voting machines- so this is news worth following.

This story is of great importance about the political activism of a group of concerned citizens in New Hampshire, who took the time to set up an advocacy group- who, together then followed the proper legislative process of establishing relationships with lawmakers, doing their due diligence on facts and data they presented to their state representatives- which has led to the fist of it’s kind- legislation to outlaw the voting machines that have tormented many Americans for numerous elections.

Here is the group that started the process with their ‘Remove The Machines” campaign:

“We are aligning to remove the voting machines in our towns/cities. Your voice as a citizen will help us succeed in this movement!

Each town/city has a preset petition threshold to remove the voting machines. Once the threshold is met, your petition will be forwarded to your town/city select board for a public hearing.

In accordance with RSA 656:40 stating ballot counting machines were adopted on a Trial Basis so we wish to  return to manual hand counting by citizens.  Thank you for your efforts and support in advance!”

From the founder of the group:

“Oh my goodness!  My grassroots advocate friend you are going to be so proud of us!!  I founded a group called MarigoldCoffeeClub.Org that has been running a campaign since the end of August collecting signatures for targets town using Warrant Articles to vote to return to hand-counting ballots…’ Felisa Blazek told me about her thrilling success in grassroots activism.

Of course, I want to hear her story- knowing other grassroots Americans are working on similar concerns in their own state after the 2020 election was so suspiciously off- this is the perfect story for me to write about.

Here is how she did it- in her own words:

“Well today is the deadline and we have 18 towns that hit the quota!  Plus 4 more are close to hitting the list with just hours to go.  Sending each town clerk the signed Warrant Articles today forcing them to put it on the ballot for March election so WE THE PEOPLE get to vote on it!!!!!!,” Blazek told me.

THEY TOOK THE RIGHT  ACTION TO GET THEIR CONCERNS ON THE BALLOT -ENTER STATE REP.

According to Granite Grok- NH State Rep. Mark Alliero has good reason to push forward a State Bill for consideration to remove the voting machines.

“On the heals of our campaign, a piece of legislation is now on the docket to go before our State in 2 days asking to also return to HAND Counting!!!  Not that I trust legislation but that is three stabs at the apple!! (3rd being if any town votes it down, we get to challenge the machine results with…,drum roll…a HAND ReCOUNT!!!”  Blazek told me.

So even if the bill flops- there is still hope.

Blazek’s excitement reflects what Alliegro wrote about in his recent op-ed to Granite Grok:

“On Thursday, January 13, HB 1064 will be introduced in a public hearing to the House Election Law Committee at 2:00 pm in Room 306/308 of the Legislative Office Building. HB 1064 mandates that New Hampshire use hand-counting in all jurisdictions to avoid these obscene errors.”

“Your presence may help legislators understand that you are not satisfied with a system that depends upon counterbalancing randomized screw-ups to elect our representatives and other public servants,” Alliegro wrote, encouraging more grassroots activists to follow the legal, and proper type of action that makes changes.

That is how change happens.  This story is still developing..