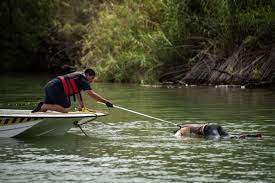 By now, everyone in America should be aware that the southern is a deadly mess, and it is mostly Joe Biden’s fault- because his policies are drawing people from all over the world and are designed to get people to risk their lives to get to the USA.

Migrants are dying by numerous methods, some are drowning, some are dying after dehydration or after trying to scale the border wall.

Ben Bergquam, a correspondent from Real America’s Voice, posted exclusive footage of San Luis AZ and the trials of the Border Patrol there with people who jump the border security wall.

Meant to deter illegal border-crossings, aspiring migrants have tried to scale the US Border security walls. Some slip and do not survive. Those who do may suffer severe injuries and frequently wind up here: San Diego’s Scripps Mercy Hospital.

Dr. Vishal Bansal is the chief of trauma surgery, and he’s seeing more and more of these patients.

“So we’ve seen a massive uptick in the number of patients from the end of 2021 up until now. It’s been a constant stream. It’s getting more and more. We trade border call with UCSD. So on the odd months, we take the border patients, on the even months UCSD takes border patients. So currently for us, we’re definitely seeing an uptick compared to April. But if you look at the last year and a half, the slope has gone straight up in the air.”

“This mass migration issue is this group of people coming over here; they’re not told how bad it can really be.

Brent Schwerdtfeger is the chief of operations for the U.S. Customs and Border Patrol’s San Diego sector.

He told Reuters the migrant deaths are due to more than just a border wall.

“It’s not just coming off of a piece of infrastructure. It’s coming across the harsh terrain. They could fall anywhere in the mountainous terrains that we have across the southwest borders as well. Plus, we have the, you know, we have a lot of water issues where the rivers, they have cross the rivers. Those are always traumatic that we have there. So they have to come across that as well. So it’s not just a piece of infrastructure that could cause not only a bad injury, but, you know, a fatality as well.”

From the highways of San Antonio, Texas, where 53 migrants died last month after being packed into a sweltering tractor-trailer, to the unrelenting heat of the desert in Arizona and the wall that former President Donald Trump touted as “just about unclimbable,” there have been more than 1,000 fatalities on the border since U.S. President Joe Biden took office in January 2021.

Rhonna McDaniel wrote for Newsweek, in an op-ed:

“Data show more than 239,000 illegal immigrants attempted to cross the U.S.-Mexico border in May. That’s only counting those who were apprehended, with many more slipping in unnoticed. Border agents also encountered 14,699 unaccompanied children. May’s numbers are the highest one-month total in DHS history and a 300 percent increase from the average number of May apprehensions during the Trump administration.”

Reuters reported on the death toll too.

“Migrants are dying in greater numbers as they illegally cross the U.S.-Mexico border. Some suffocate in unventilated trucks, others fall attempting to scale barriers and many perish from dehydration in the Arizona desert.”