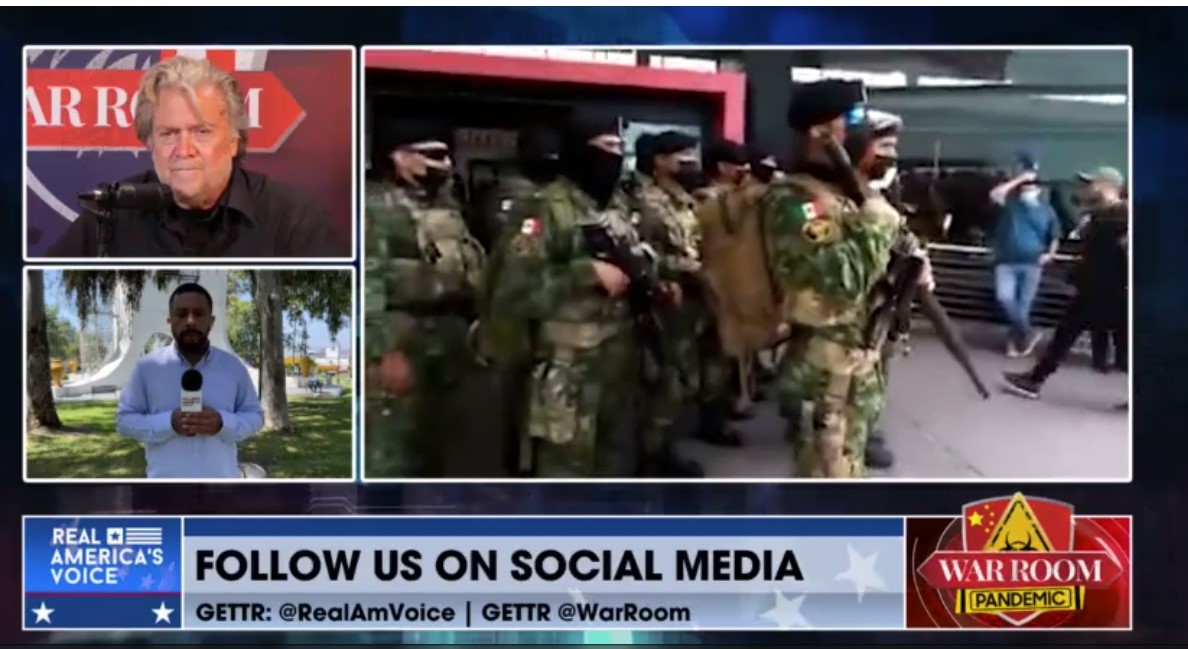 Oscar El Blue Ramirez, a correspondent for Real America’s Voice and a citizen of Mexico, appeared on the War Room with host Steve Bannon to talk about Ramirez’s exclusive breaking news that the mainstream media, in Mexico or the US, appear to be ignored- because it makes Democrat Joe Biden and the left look like a disaster.

“This is the first time in history that the government of Mexico is going to be judging and punishing individuals for terrorism against the citizens of Mexico,” Ramirez said about members of drug cartels who have been arrested in Mexico after days of violence.

ABC News reported on the violence in the area that led up to the arrests:
“TIJUANA, Mexico — Days of widespread drug cartel arson and shootings in four states last week have left Mexicans asking why the drug cartels exploded and what do they want.

The attacks killed 11 people, including a young boy and four radio station employees who were randomly shot on the streets of the border city of Ciudad Juarez, across from El Paso, Texas, on Thursday.

Two days earlier, more than two dozen convenience stores owned by a well-known national chain were set ablaze in the northern state of Guanajuato. Cars and buses were commandeered and burned in neighboring Jalisco state. And two dozen vehicles were hijacked and set on fire in cities on the California border Friday.

The federal government deployed soldiers and National Guard troops to calm residents’ fears, but the outbursts of violence raised questions about President Andrés Manuel López Obrador’s approach of putting all responsibility for security in the hands of the military rather than civilian police forces.”

Ramirez’s, who is on the scene reporting live, made a War Room appearance in two parts. Bannon added brilliant commentary, reminding viewers that while these dangerous actions Ramirez describes are happening in Mexico as a cartel war, it may as well be considered happening in a suburb or a part of American cities. These areas are close in location, and we have open borders at the moment.

“This is why we have to throw the Neocons and neoliberals out because they want us to be as all over the world. And what we’re saying is that we need to take care of business here first, and also to help assist the hard-working and great people in Mexico that are now under the gun by this cartel,” Bannon said, explaining how we need to protect our continent first.

Bannon said to Ramirez:  “This is the situation in Mexico, who is our neighbor you know, the apparatus has a spread all over the world including putting a massive amount of money and also troops forward deployed about a conflict over the Russian-speaking eastern border of Ukraine. And that is the difference between them and America First.

As we said from the beginning, there is a major war going on, in what is about to be a failed state is on our Southern border, and it is going to have massive implications of this country. We need to pay attention to Mexico at our border.

This is why we have to throw the Neocons and neoliberals out because they want our money and military to be as all over the world. And what we’re saying is we need to take care of business here first and also to help assist the hard-working and great people in Mexico that are now under the gun by this cartel.

Ramirez said: As always, Mr. Bannon, as always, we are first to give you this kind of news. It started this past week. It started with one state, and then it escalated where the Cartel were burning our automobiles, as a message from the Cartel to the government to tell them, ‘we are here, and we’re not going to let you govern us. We are going to govern the Mexican citizens. to a town that connects to our Paso, Texas. That was a black Thursday where tragedies happened, 11 lives. 11 innocent lives were taken away by these brutal, criminals who shot at people randomly outside of the streets.

Then Friday 8:00 or 9:00 in the evening public transportation was suspended, businesses were closed and the curfew was put by the citizens to stay home because they were afraid of retaliation of the cartel by taking over into the Mexican citizens.

And this is happening right next door to the United States of America,” Ramirez said.

Now there are battles between the Cartel and law enforcement. Ramirez went on to describe to Bannon what was happening between the National Gaurd and the Drug cartels and how the Mexican President was being weak and facing pressures from other leadership because the leftist President had ‘authorized cartel to do, whatever the hell they want.”

Bannon said: I want to make sure every in the audience understands, something he is not talking about what happened in Kabul, 12,000 miles away. When you heard Juarez, that’s a suburb of El Paso, it’s right there, right? If you hear Tijuana, that’s San Diego. This is essentially happening in San Diego. California in El Paso, Texas.

This is happening to us not in, not in Afghanistan. Not 12,000 miles away or 8,000 miles away. This is essentially in the suburbs of major American cities. The violence. against civilians shows you what the cartels do when they go to the next level; this is a war. It’s going to be brutal.

The United States is going to have to participate. This is also why overwhelming numbers of Hispanic Americans will vote for us.

We will eradicate what they fear and that is going to give us 75 or 80 percent of the Hispanic vote. Now, I say the right thing to do to help the Mexican people and the right thing to help our country, it is the right thing. This is the United States of America, right here, as we said, and that’s where it’s got to be defeated.

Ramirez said: We are being moved around for safety right now. I was at the military headquarters with a huge Convoy of intelligence officers. There was a huge Convoy of private investigators that just arrived with more than 100 Vehicles that just arrived today to provide support for the military and for the investigations of these individuals that have been arrested.

KEY POINT:  Ramirize told Bannon, 19 individuals have been arrested and four of them have been transferred into the city of Mexico, which they are going to be judged under organized crime, and under terrorism charges.

“This is the first time in history that the government of Mexico is going to be judging and punishing individuals for terrorism against the citizens of Mexico,” Ramirez said.

KEY POINT: Ramirez described the military intervention that was meant to protect the area. Bannon, who reminded viewers the President was weak on Cartels, asked if the action was coming from the local government official. Ramirez said that the state governors had been putting pressure on the Mexican president to do something.

After the President of Mexico made excuses for the Cartel, saying that  his hands were tied because they had ‘human rights’ and had to be protected, citizens of Mexico were frustrated their president’s lack of concern.

Ramirez said: “This call for the military is coming from the state Governors. They are pushing the Mexican president for support. The president said today he said that nothing is happening, it is the conservatives and the right-wing media, who are the ones that are sensationalizing this news about violence, military and arrests.”

Ramirez continued:
“11 people, 11 innocent Souls were murdered by organized crime on Thursday I don’t know where this man is going to get seriousness. And when he is going to actually realize that we are under attack by the organized crime that cartels, and then our sovereignty, our security, and the Integrity of the citizens is in danger?”

What happened in Juarez? That’s not right-wing media; those 11 civilians were murdered!

Cold-blood in Juarez, what’s happened in Tijuana is what’s happening. And I got to tell you for him to say that was so shocking,” Ramirez said.