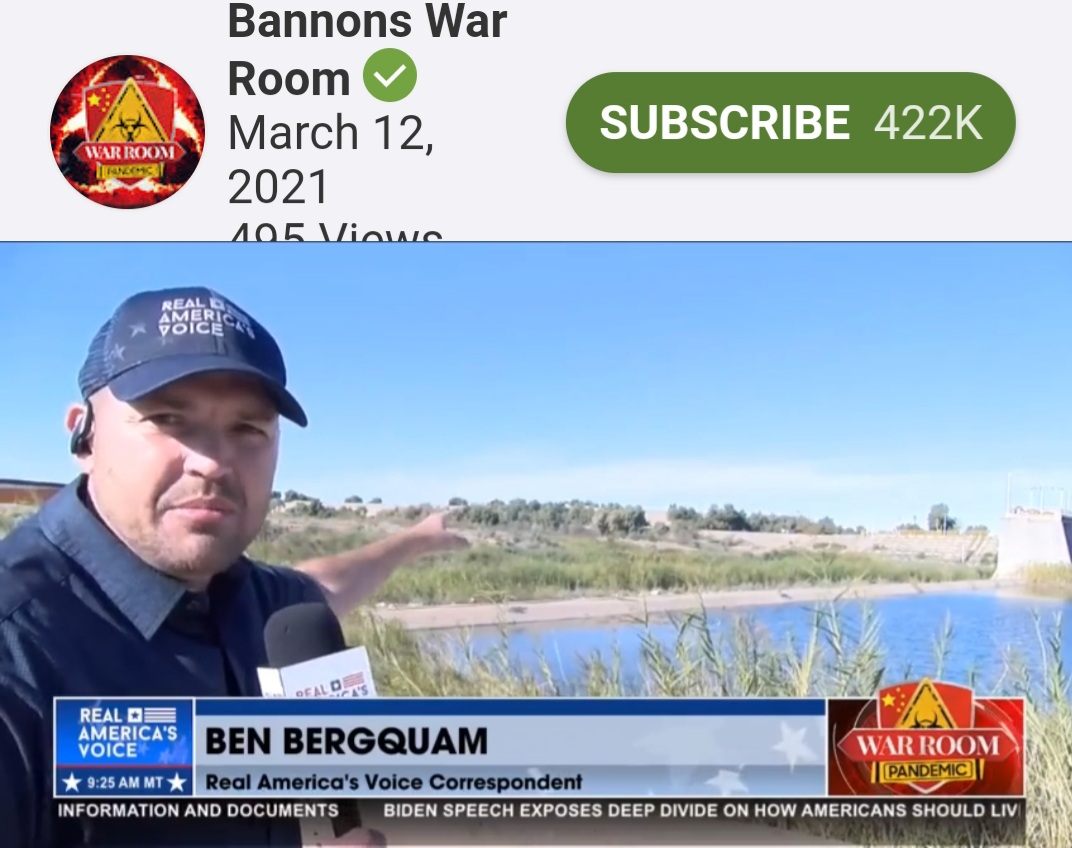 Ben Bergquam, a reporter for Real America’s Voice, alongside his Mexican collaborator Oscar El Blue from Border Network News, spoke with the host of the of Steve Bannon’s War Room on Friday.

“Jen Psaki, you are saying that the Trump administration had a morality problem? Why don’t you look at what is happening in Central America and Northern Mexico to hardworking men and women because of what you have made happen at the border,” Bannon said, calling out a disastrous Biden regime for their open border policy disaster.

The three men talked about a shocking development that had unfolded Wednesday night at the border which Ben and Oscar and videotaped, showing four men who were trying to illegally cross into the US. At the time the men were being pursued by Mexican Police and Border Patrol.

On Friday, Bergquam and El Blue had seen and experienced another group of men first hand and reported about their findings. El Blue, a native of Mexico, attempted to speak Spanish to the men and reported that the “Middle Eastern-looking men”, did not understand the language he was speaking.

“The most amazing thing was that we saw a group of Mexican Border Patrol yesterday, pursuing a group of men where there is a lot of cartel activity and a lot of organized crime activity around the border, and it is all for the patrol to deal with. The Mexican authorities came over here and apprehended a group of around 10 men, and there were two men who were the leaders, who tried to go around the wall. You saw them run back in that video from last night. Then today we have people who don’t speak Spanish coming through,” El Blue said.

“So, it is amazing the operation on a daily basis, and now we just saw 4 middle eastern men try to get over the border. I tried to talk to them in Spanish, and they did not understand a word that I was saying,” El Blue said. “They sounded Middle Eastern to me.”

WHY SO MUCH ACTIVITY THERE? WHAT IS DRAWING THEM THERE?

“This is an open gate and a hot spot over here and the Mexican authorities are not doing anything about the gate, it is just wide open,” El Blue said.

Bannon chimed in and replayed the footage Bergquam had provided him Thursday night showing the Mexican Police pursuing 2-4 men who appeared to be coyotes, see link below for same footage:

“This is a farce; this is a tragedy. You got people running around, and these people are in jeopardy the entire time. The cartel would not think twice about killing them. You have put the burden on these poor people in Northern Mexico. Do you think they have this kind of money? Do you think the people in Tujania have this kind of money? This is a problem,” Bannon said, directing his comments to the Biden administration.

Watch full clip of WarRoom below.

Ben Bergquam is a reporter for Real America’s Voice and a frequent guest on Steve Bannon’s War Room. Please follow him on Twitter @BenBerquam and follow his updates here on Frontline America.