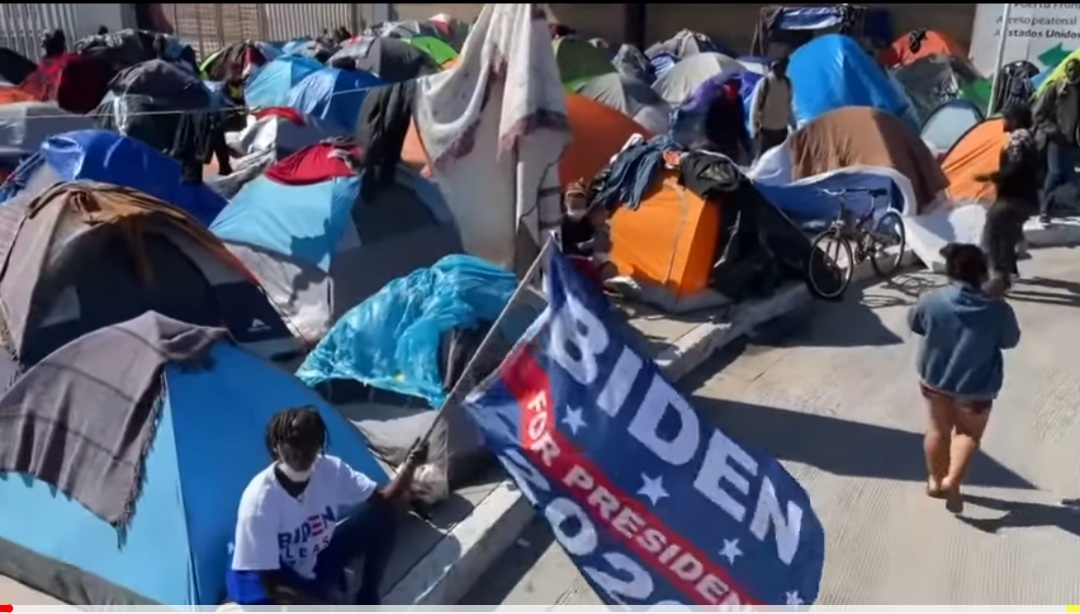 Democrat Joe Biden’s policies have made the security border walls on the southern border irrelevant, and there is a disaster on the border as plainly laid out by a Sheriff from an embattled border town, which at the very least shows the Democrats’ total hypocrisy over COVID security measures if nothing more. America seems to be in a spiral and under control of drug cartels.

“Border Patrol has, by this administration, been turned into UBER for the drug cartels to get to where they need to go into the United States,” Leon Wilmot, Yuma County Sheriff, told Ben Bergquam, the founder of Frontline America.

After days at the Southern border between crawling around in caves, confront illegals crossing into the United States, traveling with the foreign press, and videotaping foot chases between Mexican law enforcement and Coyotes, Berquam reported for Real America’s Voice from Calexico California on Saturday and showed part of his powerful interview with Wilmot.

Calexico is a city in southern Imperial County, California. Situated on the Mexico–United States border, it is linked economically with the much larger city of Mexicali, the capital of the Mexican state of Baja California. It is about 122 miles east of San Diego and 62 miles west of Yuma, Arizona.

Bergquam, against a background of a section of the border security wall that was erected by President Donald J. Trump, showed the massive presence of the wall that Congress has already paid to have finished, and that Joe Biden and his administration have stopped work on, leaving large enough sections open that there is now a crisis at the border with masses of illegal entries and drug enforcement problems unfolding.

“People still climb this wall, which feels like it is about 40 feet high. Border Patrol use tires to scrape the ground to reveal footprints to track them,” Bergquam told the Real America’s Voice show hosts.

Showing a homemade rake he found in Yuma, Arizona, he said, “1000 people can’t climb over this fence at a time, but some do still try.”

This would explain why gigantic groups of people are focused on traveling through communities where there are sections of the wall under Biden’s work stoppage left open allowing 1000’s people in, or as Bergquam has uncovered, the American government has felt large gates wide open, which Mexican authorities do not seem to be able to shut.

Bergquam has presented his reports to Steve Bannon’s War Room audience as well, as a frequent guest. Populist Bannon has shown outrage at what open sections do to draw in criminals, like drug cartels, through neighborhoods of working-class Mexicans, something that Biden administration does not appear to care about.

“This is excellent information and we have been focused on the borders issues more than most news outlets, the RAV host told Bergquam.

As discussed on the show, Bergquam has worked for weeks gathering footage, interviews, and intel to bring the American people a longer special on the Joe Biden Border Crisis.

“Ben on the Border will show full clips of interveriws and more this Sunday, on Real America’s Voice at 11AM and 7PM Eastern”

Bergquam showed a clip of his footage from an upcoming special that should ignite a firestorm of concern from people who are worried about the Pandemic:

“How is it that you have 26 plus countries locked down and you have 14 days that you have to self isolate, but yet if an individual comes across the border illegally and entered our country, you are going to give them a pass that in 71 hours to get on a bus, a train or a plane to travel to the interior of the United States with no COVID test?” Wilmot asked.

Watch the rest of this excellent and firey interview about how people are getting into society because ICE is not allowed to have them in the area where they can be tested:

Please share this story to help Ben get the message out that Biden is making the southern border a crisis, and tune in on Sunday, to Real America’s Voice, for dramatic details.

Ben Berquam is a reporter for Real America’s Voice and a frequent guest on Steve Bannon’s War Room Pandemic. He is the founder of Frontline America and you can follow him on Twitter at @BenBergquam.