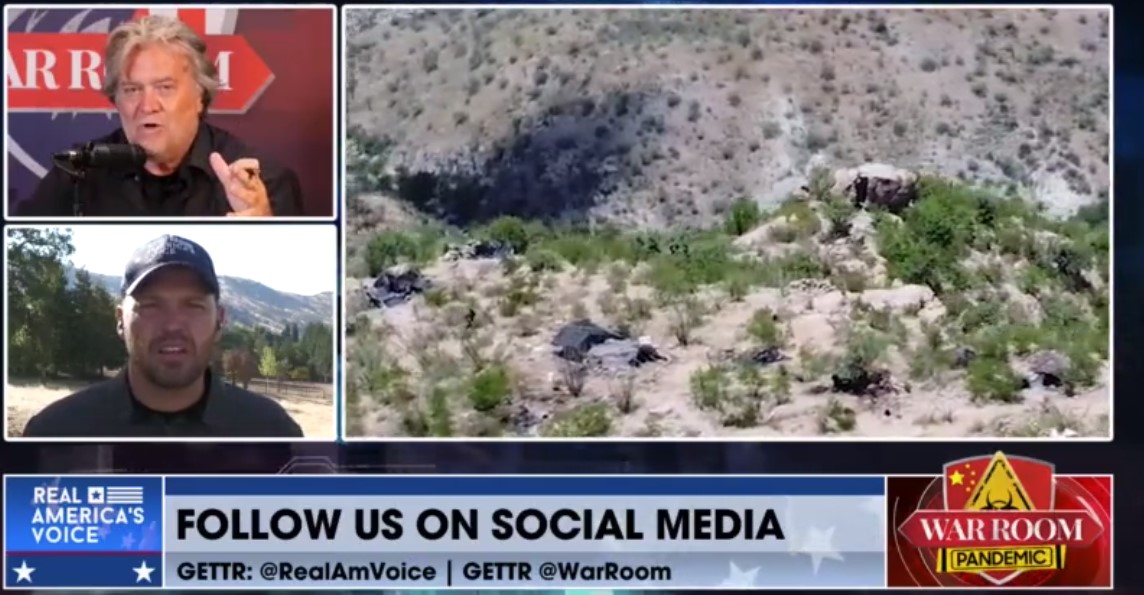 Real America’s Voice Correspondent, Ben Bergquam, appeared on the War Room Podcast with Steve Bannon on Monday to show some shocking investigation footage from the Southern Border in Arizona that proves that America is at war with Drug Cartels- on our very own border.

Bannon, who served in the Navy and at the Pentagon, agreed with Bergquam that America is losing it, that we are losing the war.

“The Cartels have crossed the line, and they are expanding their operations at the border, this footage proves that,” Bannon, an expert on the Southern Border, after years of investigations and media coverage, said to Bergquam, who has been investigating the border for over a year in person with extensive networks of border and law enforcement experts. Again the two agreed.

Bannon, referring to an earlier report on the program from Oscar El Blue Ramirez’s, who talked about cartel members shooting Mexican citizens, said:

“This crossed the line. First of all, people should know as bad as the cartels are they usually try to keep it among law enforcement and officials with their criminal activity,so when they start randomly shooting civilians in Juarez, when they start burning things in Tijuana, they’re sending their signal that they’re going next level that this war is going to expand. I want to re-emphasize, this is happening a basically in El Paso, Texas and San Diego California,” Bannon said.

Bergquam- ready to make that point, along with Bannon, joined in and said, “Steve, We just obtained video this weekend down in Arizona, and I want to show you this and break it down into three separate clips, this is shocking, it’s never before seen before we are breaking it on the War Room.”

This photo shows one of two areas of Mexican drug cartel activity that has been under surveillance. This bunker is the high ground.  In part two, Bergquam shows the bunker on the low ground where an associate of Bergquam’s named Tim Long witnessed a fire battle, likely over drugs.

The high ground is littered with canvas-covered tents and possibly work areas. 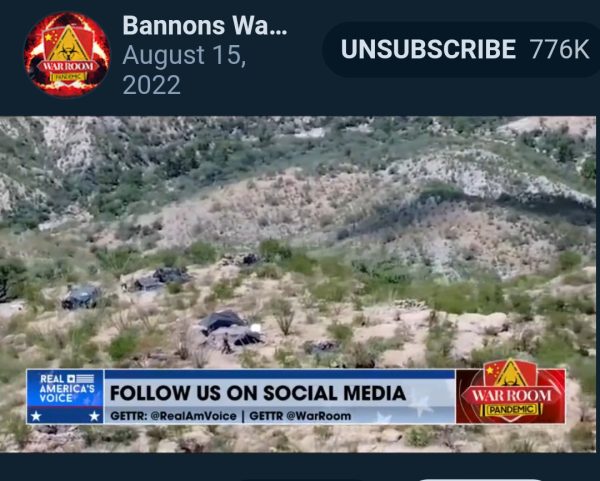 “The first video you’re looking at is a cartel bunker. The cartels are amassing bunkers on our border, and they have permanent forward operating bases on our border,” Bergquam said.

According to military sources, a forward operating base is” any secured forward operational level military position, commonly a military base, that is used to support strategic goals and tactical objectives.”

“This is right across the border where the wall ends between Sasabe and Nogales, Arizona. where they have  cartel bunkers. These are strongholds were there doing their operations, bringing their drugs into America,” he said.

“Right down the way, you can see on top of this mountain that’s where the main cartel is; it’s the Sinaloa cartel which basically goes around this cartel and Tijuana over to El Paso.

But, with all of these guys, it’s the same level of violence. These guys are just evil, and it’s all being brought to you- in America- because of Joe Biden and the open borders left; just down the way, we have another video, another cartel bunker.

Below is a screen grab of the lower bunker being surveilled where a battle happened. 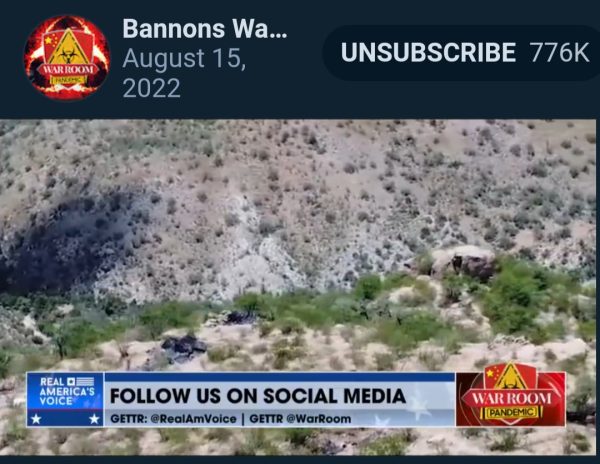 This was a war warring faction that was taken over by the first group that you were looking at; this was blown up. This was a war. Along with Tim Foley of Arizona border, we had a Recon who witnessed a firefight between these two organizations, where the one on the top, the High Ground, ended up going over and taking out the guys on this lower level.

The screen grab below shows armed men in camo uniforms walking with a man who has had his hands tied. Bergquam said this is in the area of the lower bunker after a firefight, according to his witness. 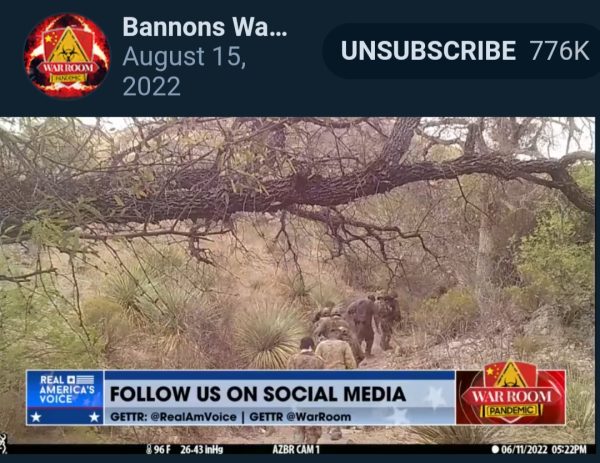 “I want you guys to see as the trail cam that leads directly in from this cartel de Sinaloa from these high points below onto American soil, these are the cartel members who are heavily armed, well-funded well-fortified,” Bergquam said, explaining the scene.

“They are bringing in drugs and people onto American soil. We believe the first person that was in that train of people was a hostage because his hands were tied behind his back,” he said.

“We believe that those drugs were taken from the other cartel that they had just taken over. They had just blown up their bunkers there; this is happening,” he added.

“This is a war; America is at war. We’re just losing it. We don’t even know it’s happening,” Bergquam told Bannon.

“We have people dying in America every single day from this war. As you mentioned, it’s already going on and it’s being invited by Joe Biden. The open borders left that is why these elections are so critical. We need people who will enforce Trump’s remain in Mexico policy,” Bergquam said in a call to action for Americans to be prepared to vote in future elections for people who enforce Trump’s border policies.